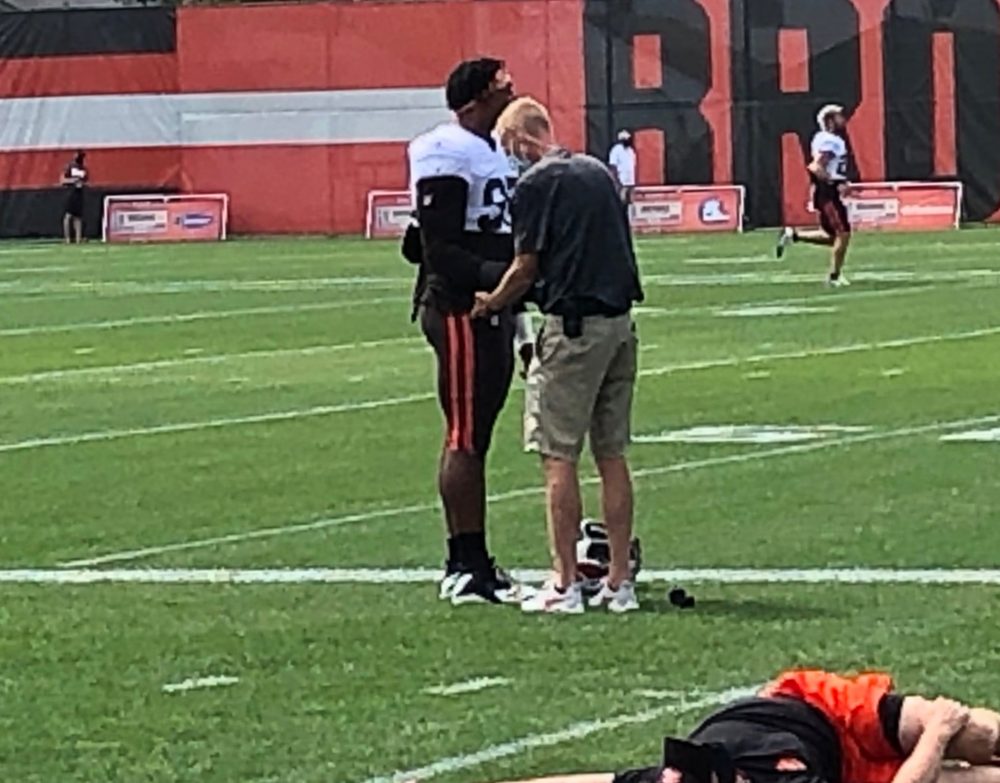 The wrist brace may never come back.

Garrett began practice with a brace on his right wrist. He sat out Sunday’s session at FirstEnergy Stadium, and the players were off Monday.

After only a repetition or two, Garrett unwrapped the thick wad of black tape, took off the protective tube and discarded it, tossing it to a member of the staff.

He participated in most of the individual drills during the 30 minutes open to reporters, including hitting the blocking sled. He didn’t do a pass-rush drill where the linemen weave through heavy bags. As he watched, he loosened up the wrist with circular motions.

Garrett missed the first five practices of training camp with a strained hamstring but had been back in team drills for more than a week before sitting out Sunday.

“He’s got his looks in. I know he’s going to be ready to roll the next couple of weeks and we’re going to get plenty of looks against him.”

The Browns are giving center JC Tretter every chance to return from knee surgery in time for the opener Sept. 13 against the Ravens.

“I’d say he’s progressing,” coach Kevin Stefanski said. “We really want to use every single one of these days to our advantage and I think the prudent thing would be to wait till next week to really check in to say whether he’s going to make it for that first game or not. I’m really worried about him today more so than next week.”

Stefanski said “we’ll see” when asked if Tretter might practice this week.

The Browns would prefer Tretter be in the middle against the Ravens. Tretter is one of the smartest players in the league and has started all 48 games with the Browns, playing through a high ankle sprain and other injuries. And they have rookie Jedrick Wills starting at left tackle.

Bitonio said Tretter is doing everything he can to make it back in time for Baltimore.

“He’s been in every meeting. He’s watching practice on his iPad, and he’s getting focused and ready to roll,” Bitonio said. “I know mentally he’s going to be ready to play if he’s ready to go physically. He’s always been a smart guy, and he knows where we’re at play by play and issue by issue.

“It’s definitely different, but if anybody can do it, he’s done it the last few years where he hasn’t practiced with high ankle sprains and things of that nature, and he’s come into the games and he’s been really mentally sharp. I know he’s been pushing himself. He’s here every day just trying to get back and be ready for Week 1.”

If Tretter isn’t ready for the opener, Bitonio will start between a pair of rookies. He’s liked how Harris has handled himself with the starters.

“He is playing center so there is a lot on his plate making calls and things of that nature,” Bitonio said. “He has done a really good job of picking that up. He is an athletic guy. He can move, he is quick and he gets to his position really well. Those are things that are really big positive signs.”

“This is a good development for Mack,” Stefanski said.

Wilson is expected to return in four-to-six weeks.

“That is obviously a blessing that he gets to play and have fun,” said rookie linebacker Jacob Phillips, who’s taken Wilson’s starting spot on the weak side.

The Browns remain on the training camp schedule but have shifted the focus to the regular season. Media are allowed to watch only the first 30 minutes as opposed to the whole practice during camp.

“We wrapped up install last week so now we are really streamlining our systems on offense, defense and special teams,” Stefanski said. “Now that we are a month into it, we have a pretty good handle on what our players are good at and what they can handle. On offense, defense and special teams, we will start implementing some schemes that we think could be good for us in the first couple weeks of the season.”

Bitonio acknowledged it took awhile to get to this point after no offseason practices and an acclimation period after returning to the facility.

“But the last couple weeks, we have been going pretty steadily,” he said. “I think we are in a good spot. We are excited with where we are. I think we saw some good things in the scrimmage on Sunday, and we are moving in the right direction. There are a lot of positives out there.”

Rookie safety Grant Delpit is back in Browns headquarters after surgery to repair a ruptured Achilles tendon. Phillips was teammates with Delpit at LSU and was crushed when he suffered the season-ending injury.

“Grant is a brother to me so I definitely reached out, and I definitely was real, real torn up about the situation,” Phillips said. “It is football. You have to realize that God has a path for everybody. I try to just tell him to keep your happiness, stay up and do not let this get you down because there are so many things in front of you and so many more goals that can be reached. This is really just a speed bump. I just try to tell him that and make sure he keeps his mentals good.”