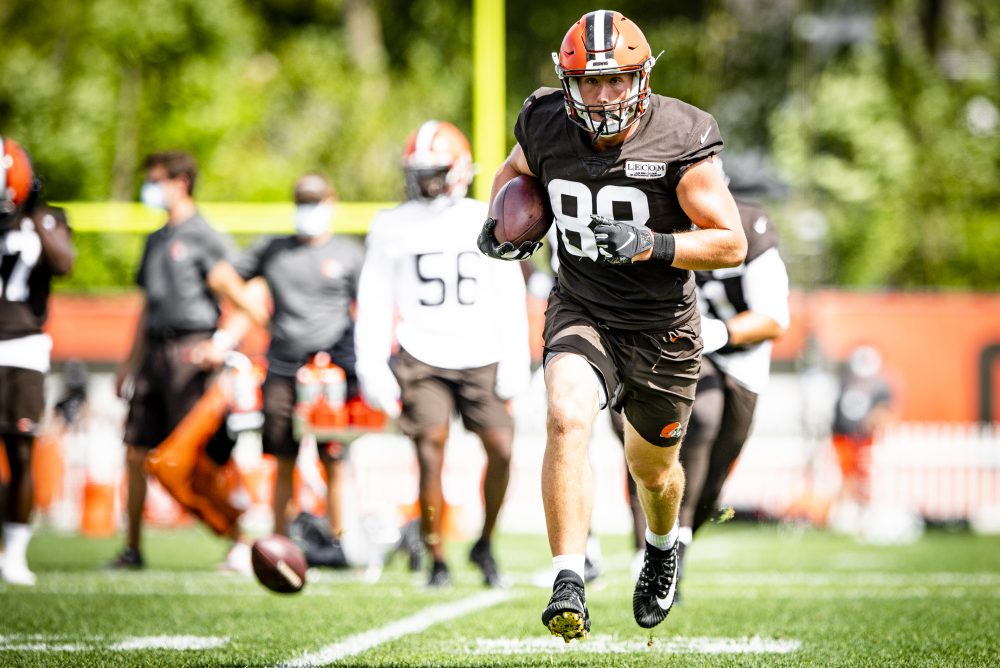 Bitonio loves what he’s heard from Bryant. Not much.

“He’s a mature guy. He’s focused. He hasn’t talked much, which is good for a rookie,” Bitonio said Tuesday before practice. “He comes in and he handles his business. From my perspective, every time the ball comes his way he’s making a play on it and he pops right up when he gets hit. He’s just doing all the right things you want to see in a rookie.”

“I feel like that is one of my foundation things is just going in head down and go to work,” Bryant said.

His playmaking has not only earned him repetitions with the first-team offense, Bryant was voted the Maurice Bassett Award winner by beat writers as the best rookie in training camp.

The fourth-round pick out of Florida Atlantic, No. 115 overall, stepped into a crowded position with veterans Austin Hooper, David Njoku, Pharaoh Brown and Stephen Carlson and quickly stood out. He figures to get time with Hooper in two-tight end sets when the season starts Sept. 13 in Baltimore.

“Harrison’s done a nice job,” coach Kevin Stefanski said. “To his credit, he really, really is a diligent worker, a student of this game. We’ve moved him around the formation, moved him to different positions and he hasn’t missed a beat.”

That’s the scouting report from Clint Trickett, who coached tight ends for Bryant’s final three years at Florida Atlantic before becoming co-offensive coordinator/quarterbacks coach. He watched Bryant develop into the nation’s top tight end — he was the first player from a non-Power 5 conference to win the John Mackey Award — after spending most of his high school career as an offensive tackle and defensive end.

“Any time you put anything new in front of him, he’s one of the first that grasps it,” Trickett told The Chronicle-Telegram by phone after the draft. “His coachability would probably be his greatest strength.”

Bryant’s receiving skills stood out throughout training camp. He caught just about everything thrown his way, including in traffic, and didn’t appear overwhelmed by the step up to the NFL.

“Obviously it’s nice for your work to be noticed,” Bryant said of the Bassett Award. “But it’s practice and that was my goal is to just come out and show what I can do. Do whatever I can to make the team and help the team win, and I feel like I’ve done that so far. And I’m just looking to continue to improve every day and whenever I get my opportunities the rest of camp, or whether that’s in season in the games, go out and produce.”

Bryant (6-foot-5, 243 pounds) caught 65 passes for 1,004 yards, a 15.4 average and seven touchdowns as a senior, finishing with 148 career catches for 2,137 yards and 16 touchdowns. With regret and disgust, Trickett said Bryant was underutilized until his senior year.

“Then we realized, hey, he’s our best player, let’s put him wherever we need to all over the field. And he produced the way we knew he would,” Trickett said. “So we just kept feeding him the ball, especially on third down, and he always responded for us.”

Bryant caught most of his passes in the flat, until the coaches split him out and sent him downfield. The first time he lined up wide in a game was against Ohio State and cornerback Jeff Okudah, whom the Lions drafted with the No. 3 pick.

“I think he had the largest reception on Jeff Okudah all year long, a 14-yard fade,” said Trickett, who had former Browns coach Freddie Kitchens and his wife as babysitters when Kitchens was an assistant for his dad, Rick. “And he’s just out there lining up, catching balls. He’s got his best ball ahead of him.”

General manager Andrew Berry selected Bryant because Stefanski uses tight ends like people use socks — two at a time. Even if Bryant is considered the “receiving” tight end in the tandem, he must be able to block in the run and pass games.

“He’s a little smaller than some of our other tight ends, but he goes in there and he just tries to fight, and that’s all you can really ask for of those tight ends,” Bitonio said. “They’re not used to blocking 280-pound defensive ends, and he comes out there and he attacks them. He wants to be a part of it. That’s really all you can ask for from a rookie. And he’s focused and he doesn’t really make those mental mistakes.”

Bryant said his experience at tackle in high school helps as a blocker, but the bigger bodies and scheme have been adjustments.

“It is challenging every day, and I am just looking to continue to improve in that aspect of my game,” he said. “The biggest thing with blocking is just being willing and just going in there and sticking your head in there.”

Bryant arrived at Florida Atlantic at 205 pounds and put on 10 a year, so Trickett expects him to keep getting bigger and stronger. Even without the extra muscle, Trickett doesn’t doubt his blocking.

“I’ve seen some reports saying his blocking needs work. I’d like to see what the hell they’re talking about,” he said. “Because I think that’s one of the best parts of his game is his blocking, and if you turn on the Senior Bowl tape he’s kicking everyone’s a– blocking. And that convinces me. I’m just ready for him to go up there and just shut people up with that. He’s a phenomenal blocker.”

Sheldrick Redwine has passion for fighting social injustice, foundation to help kids and is ready to take next step in career
Nick Chubb thrilled to have a season, focused on present despite big money waiting for him in near future