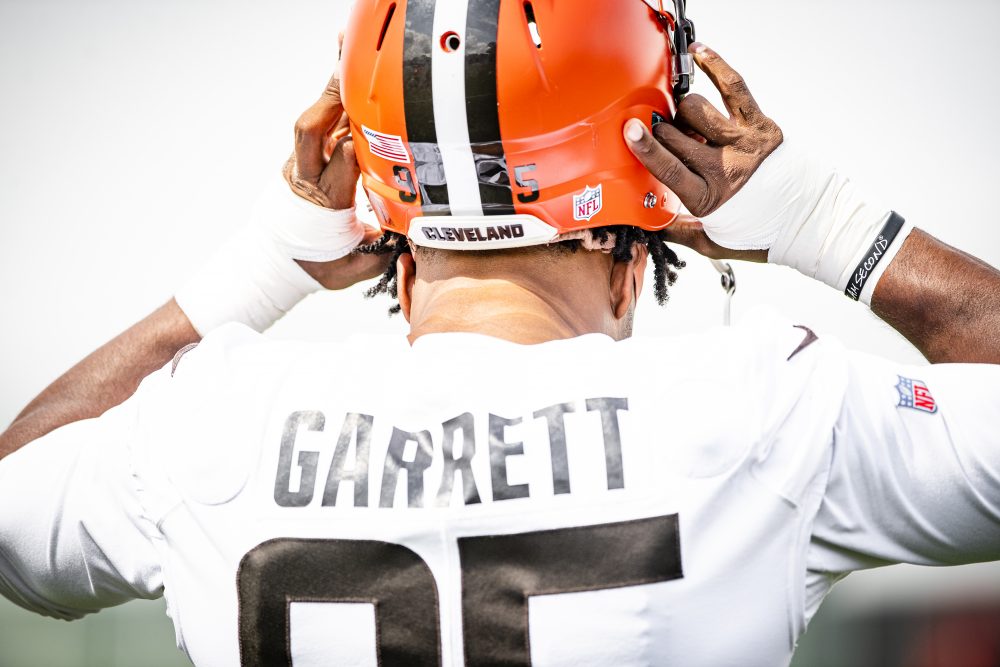 BEREA — Defensive end Myles Garrett was back on the practice field Wednesday.

This time he started without a brace on his injured right wrist.

Garrett returned to practice Tuesday after sitting out Sunday’s session at FirstEnergy Stadium. He began practice with layers of tape over the brace but quickly unwrapped the tape and discarded the plastic tube.

“Myles did a nice job yesterday. He is no worse for the wear,” coach Kevin Stefanski said Wednesday before practice.

Garrett went through individual drills during the 20 minutes open to reporters Wednesday, including violently hitting the blocking sled. The players weren’t in pads.

Wyatt Teller was expected to have to compete to keep his job as the starting right guard but he’s been with the first-team offense for all of training camp. Guards Drew Forbes, Colby Gossett and Malcolm Pridgeon opting out of the season due to coronavirus concerns was a factor, but left guard Joel Bitonio said Teller seized the opportunity.

“I know Wyatt worked his butt off this offseason,” Bitonio said. “He was truly focused. He wanted to help transform his body a little bit and just be ready to play.

“He has had some chances his first two years in the league and he has been on a couple different teams, but he understood this right guard spot was going to be a competition and he wanted to work for it. He has done everything he has really needed to. He has come out there, he has competed every day, he has worked hard and he has continued to get better like the rest of us.”

Teller started the final nine games last season after replacing Eric Kush. He started seven games as a rookie with the Bills in 2018, but they traded him to the Browns at the end of last preseason. The Browns sent fifth- and sixth-round draft picks in 2020 to Buffalo in exchange for Teller and a seventh-rounder in 2021.

“He has done a great job of really putting himself in a position to be successful this year,” Bitonio said.

Kick returner JoJo Natson has two catches and one rush in a three-year career, so he admitted to being a bit surprised he’s been a significant part of the receiver rotation in camp.

“I just look at it as Coach giving me an opportunity to show what I can do as a receiver,” he said. “I am just taking that one day at a time and learning from the guys in the room.”

Natson said he can take the top off a defense and would welcome the opportunity.

‘That would be love if I could use some of my speed on offense,” he said.

General manager Andrew Berry must cut the roster from 80 to 53 by Saturday at 4 p.m. Without preseason games, the evaluations will be entirely based on practices.

Stefanski wouldn’t say if he prefers to keep two or three quarterbacks. When it comes to the rest of the positions, the players’ ability to contribute on special teams will have an impact.

“That kind of goes into you need the best 53 football players, and really in a lot of ways, special teams factors into that, for sure,” Stefanski said.

The Haslam Sports Group has launched a diversity and opportunity fellowship to improve the pipeline of diverse sports industry leaders. The yearlong sports business opportunity will be for recent college graduates and cover a variety of disciplines with the Browns and Columbus Crew. Four people will be chosen.

“Obviously Tito is a stalwart in this city, so somebody that I want to get to know,” Stefanski said.