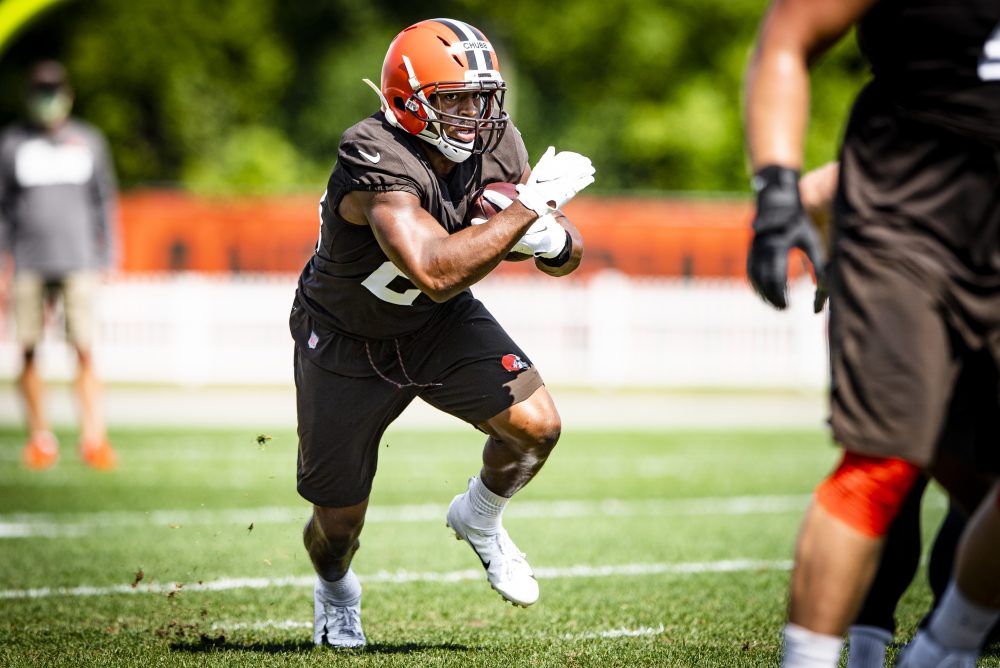 BEREA — Nick Chubb almost saw his career end with a horrific knee injury as a sophomore at the University of Georgia.

He wasn’t sure there’d be an NFL season because of the coronavirus pandemic.

So he knows better than to let his focus wander too far into the future. Even if a contract extension upward of $50 million is on the horizon.

“I see it, I know it’s happening, I’m aware of it,” Chubb said Thursday. “But I’m just focusing on this team right now.”


The “it” is a mini-run of sizable extensions for his fellow running backs across the league. Chubb isn’t eligible for an extension until after this season, but if Carolina’s Christian McCaffrey signed a record four-year, $64 million extension and Tennessee’s Derrick Henry (four years, $50 million) and Cincinnati’s Joe Mixon (four years, $48 million) followed, Chubb seems headed for huge money.

“I’m a big believer in everything happens for a reason,” he said. “Whatever happens to me, it’ll be for the best, I believe. So I’m just trying to get better every day here and not worry about the future.”

The extensions have happened despite a belief by many that running back has become less valuable in today’s NFL. Analytics seem to support not devoting a lot of financial resources to running back, so the data-driven Browns front office will have a decision to make on whether to lock in Chubb for the long haul.

The argument for securing him starts with the fact he’s one of the best backs in the league. He finished second in the NFL last year with 1,494 yards rushing, averaged 5.0 a carry and scored eight touchdowns.

He’s also respected and appreciated by teammates and coaches for his work ethic, unselfishness and devotion to the team.

“I love how Nick Chubb works,” new coach Kevin Stefanski said. “You see him on the grass and you see him in the classroom, he is all ball all the time.

“He is a good person. He is a solid citizen. He is a great teammate. Pleased with what Nick means to this team.”

Chubb has played every game in his two seasons, totaling 16 rushing touchdowns and two receiving. He got lucky when he only missed three days after sustaining a concussion Aug. 17 when linebacker Mack Wilson tackled him around the neck and the side of his helmet hit the ground.

Chubb’s looked good since returning, showing the power and burst that made him so effective last year.

“You guys see what Nick Chubb can do,” cornerback Denzel Ward said. “He is a big back. He can run. He is shifty. He is a one-cut guy. He is definitely a playmaker out there.

“Some people will probably be hesitant seeing him come around on the edge as fast as he comes. He is a great player.”

Wilson was demoted to the second team the next day in practice, and some of his teammates were angry about the overzealous takedown of Chubb.

“He reached out to me through text,” Chubb said. “He didn’t even have to. I understand. It’s football. He’s playing hard, going hard, as he always does.”

Wilson hyperextended his knee the day after Chubb’s concussion, and the initial fear was he’d miss the season. But he won’t need surgery and is expected back in about a month.

“I did feel horrible the next day seeing his knee injury,” Chubb said. “It was me and him inside the training room. I’m the perfect guy for him to talk to about knee injuries, so I encouraged him.

“It turns out his injury isn’t as near bad as mine, so that’s a positive that came out of it. Now we’re just trying to get him back out there with us.”

In 2015 while at Georgia, Chubb tore the posterior cruciate, medial collateral and lateral collateral ligaments on a run against Tennessee. He returned to rush for 2,475 yards and 23 touchdowns in his final two seasons and was drafted No. 35 in 2018.

Chubb, who’d like to capture the rushing title taken from him in Week 17 last year, was worried the pandemic would keep him off the field.

“I think the fact that we got to come out here and actually play is a positive because of all the uncertainty going on before the season. I did not know if we were going to have a season,” he said. “I think for us to be able to come out here and practice every day, not many cases on our team right now and just keep playing football, which we love, so I think that is a positive.”

Chubb did what he did last year despite a line that needed an overhaul. The Browns upgraded in the offseason with right tackle Jack Conklin and left tackle Jedrick Wills, and Chubb’s noticed a difference.

“I can tell. It is easy to see,” he said. “It has a lot to do with the coaching, too, because (line) Coach (Bill) Callahan gets those guys going every day and he never lays off them. Other than that, the five guys up there are very talented. They do everything right. They are a great O-line and a great unit, and I love running behind them.”

Chubb might’ve felt like he was on his own last year. In addition to the line’s struggles, then-coach Freddie Kitchens didn’t use a fullback. Stefanski demanded one when he was hired, and general manager Andrew Berry traded for Andy Janovich.

“I love having Andy in front of me,” Chubb said. “He has eyes like a running back. I can trust where he is going. I know he is going to be in the right place.”

The Browns have only been together for a little over a month, but it doesn’t take long to recognize and admire Chubb’s attitude.

“Very humble guy. Very hard worker on the field,” rookie receiver Donovan Peoples-Jones said. “You can just tell how much he loves football by the way he practices. It has been very inspiring to me just to see how he practices and how he finishes. Great to be around.”

TE Harrison Bryant wins Maurice Bassett Award as best rookie in camp after winning over coaches, teammates with play, focus
Rashard Higgins has gone through a lot in years with Browns, but re-signed after talk with Baker Mayfield and grateful he did