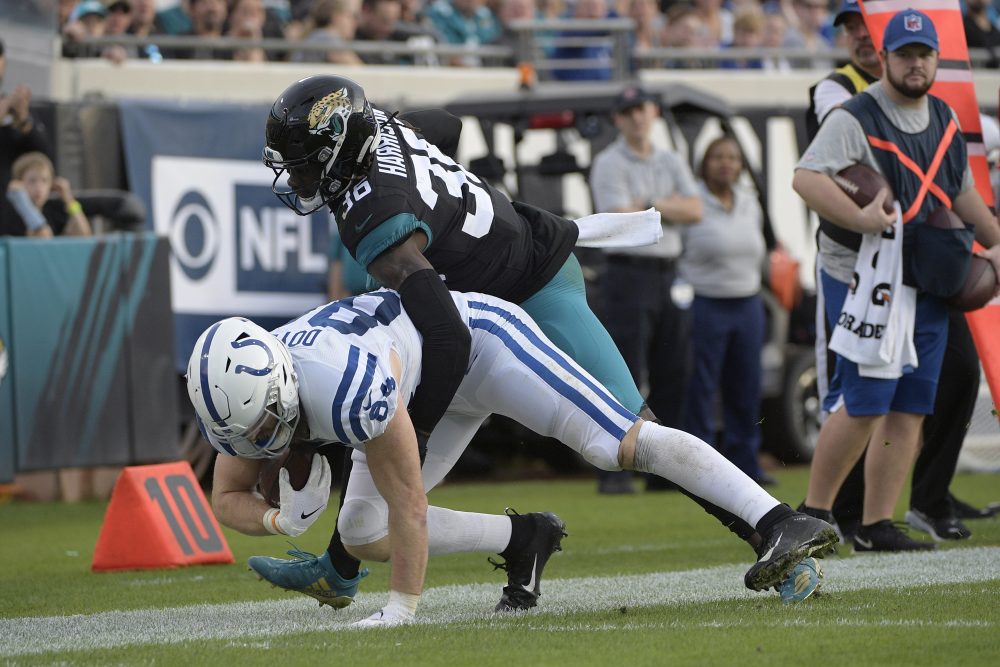 Berry sent a fifth-round pick in the 2021 draft to the Jaguars for Harrison, who’s started 22 games at strong safety in two years. He was a third-round pick out of the University of Alabama in 2018 and will join former Crimson Tide teammates linebacker Mack Wilson and left tackle Jedrick Wills.

Delpit was the No. 44 pick out of LSU and expected to start Week 1, but his right Achilles tendon ruptured Aug. 24 during a non-contact drill in practice. When he’s up to speed with the system, Harrison will likely start alongside Karl Joseph and bump 10-year veteran Andrew Sendejo to the role of No. 3 safety.

The Browns also have Sheldrick Redwine, a fourth-round pick in 2019, and undrafted rookie Elijah Benton.

Harrison, 23, is under contract for two more years and could pair with Delpit as the starters in the future. Joseph and Sendejo signed one-year deals as free agents.

The Jaguars are in full rebuild mode and have parted with several veterans as they stockpile draft picks. Harrison had been running with the first-team defense, but the Jaguars have rookie Daniel Thomas, a fifth-round pick from Auburn.

Denzel Ward went to the Pro Bowl as a rookie after being the No. 4 pick out of Ohio State in 2018. He’s determined to make it back this year and earn status among the upper echelon of NFL cornerbacks.

Ward feels he’s improved his technique under the new coaching staff and has “definitely made a lot of strides.” Returning to the Pro Bowl is only one of his goals.

“I got a lot more than just the Pro Bowl,” he said. “Just go in and try to win every game that I can.”

The first home game is Thursday Sept. 17 in prime time, so coach Kevin Stefanski will use Friday’s practice to prepare his players for the experience. The session will start at 7 p.m. at FirstEnergy Stadium and feature the routine of a gameday.

He said it will be a “crisp, quick practice” and won’t include the scrimmage period of Sunday’s session at the stadium. It will be the final work before Saturday’s roster cuts, but the Browns aren’t treating it like a normal preseason finale.

“It is not going to be something where we are going to play the young guys for an hour to see what we have because the truth is, this whole camp has been an evaluation of those young guys,” Stefanski said.

“I feel like he has been having a great camp and making plays when he has been in there,” Ward said.

Green played at Oklahoma State and reportedly received $145,000 in guaranteed money to sign with the Browns.

“He has done a nice job,” Stefanski said. “He has good size. He has been very eager to learn. I have been pleased with what he has been doing.”

“It is tough, but like with everything, you have to adjust,” he said of the preseason being canceled because of the coronavirus pandemic. “It has been a crazy year so far and a lot of adjustments have been made, and that is what we are going to continue to keep doing.

“I am using practice as preseason reps. When we do team (drills) in practices, it is kind of like a mock preseason game where all that stuff matters.”

The sixth-round pick out of Michigan has looked good as a receiver and returner.

“He has gotten better every day,” Stefanski said. “He came out here, and his effort has grown immensely from Day 1 to Day 13. We are putting a lot on his plate … and he has not backed down one bit.”

The Browns waived safety J.T. Hassell, cornerback Donnie Lewis Jr., receiver J’Mon Moore and defensive tackle Ricky Walker. After the trade for Harrison, the roster stands at 76. It must be cut to 53 by Saturday at 4 p.m.