Predicting the roster: The crowded receivers room should provide the drama 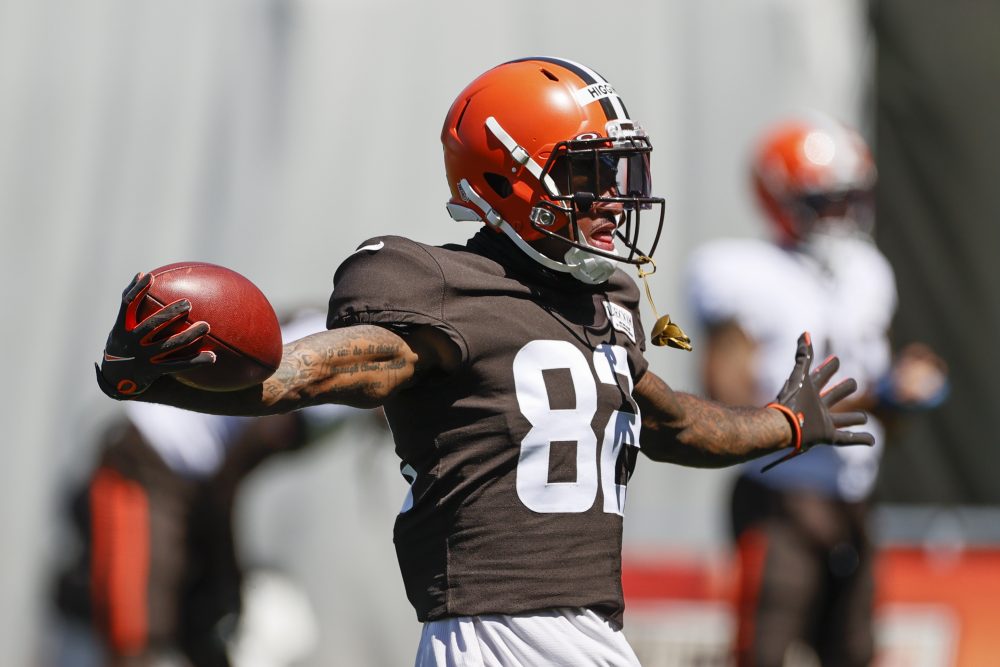 The juiciest drama of the roster cuts will involve the receivers.

That’s only fitting, because the receivers room is often filled with theatrics and divas.

General manager Andrew Berry is charged with setting the 53-man roster for the first time and must cut from 77 players by Saturday at 4 p.m. Many of the decisions are automatic, but he’ll have some difficult choices at wideout.

How many to keep? Do all the backups need to be proficient on special teams? Can JoJo Natson play quality snaps on offense, or is he strictly a punt returner?


Coach Kevin Stefanski loves using multiple tight ends at once and often employs a fullback. That doesn’t leave a lot of snaps for three-receiver sets, so Berry could try to save a roster spot and go with only five wideouts. That would make the decisions even tougher.

Odell Beckham Jr. and Jarvis Landry are obvious locks. KhaDarel Hodge has been praised by coaches, seen a ton of time with the first-team offense and is a special teams ace. Rookie Donovan Peoples-Jones is a draft pick, has been a consistent playmaker on offense in camp and can double as a kick returner.

That would likely leave two spots. Natson was signed as a free agent to boost the return game and has played more on offense than even he expected, so it would be surprising if he doesn’t make the team.

That pits Rashard Higgins, Damion Ratley and Taywan Taylor for the sixth spot. Hodge, Peoples-Jones and Natson aren’t proven commodities on offense, so this choice could wind up being the No. 3 wideout when the season opens Sept. 13 in Baltimore. Higgins has a big edge in experience and is the favorite to stick, but Ratley is much faster and has a higher ceiling.

Plenty of fans would revolt if Higgins were cut, but it’s not out of the question. If the coaches plan to use running back Kareem Hunt as the third receiver, Higgins’ chances of staying shrink.

The intrigue across the rest of the roster is reduced by the unique circumstances of this season. With no preseason games, any “breakout” performances by unknown youngsters happened in the bubble of Berea. And they’re much tougher to recognize than in a game setting.

So the number of surprises when the cuts are announced could be low.

I wouldn’t rule out a trade of tight end David Njoku. Rookie Harrison Bryant was the MVP of camp and could take Njoku’s spot as the No. 2 to Austin Hooper.

Defensive end Chad Thomas, a third-round pick in 2018, appears to be in trouble after being leapfrogged on the depth chart by Porter Gustin. And former starter Chris Hubbard was slated to be the top backup on the offensive line but could be jettisoned after an ankle injury sidelined him for the last week.

Some other things to keep an eye on:

** Because of the uncertainty involved with COVID-19, Garrett Gilbert should be kept as the No. 3 quarterback. It’s too risky to try to bring him back on the practice squad when he could be needed as the starter if something disastrous happens.

** I expect a decent amount of turnover Sunday with waiver claims. Linebacker and both lines are the spots to watch.

** The bottom-of-the-roster decisions will be influenced by whom Berry thinks he can bring back on the expanded 16-man practice squad. For instance, if he’s confident Ratley will clear waivers and come back, then it’s another reason to keep Higgins on the 53-man roster.