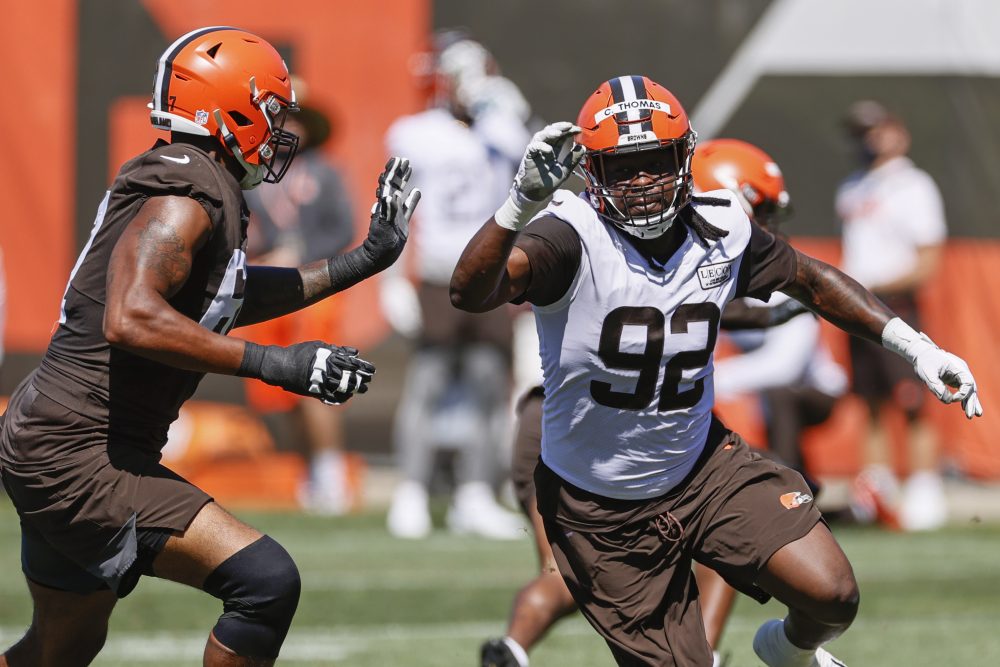 Andrew Berry’s first cutdown day as a general manager was short on surprises.

His initial 53-man roster is long on tight ends.

The names and numbers poured in for the Browns on the NFL’s busiest transactional day of the year, which followed the strangest six-month stretch in NFL history. The painstaking decisions came after an entirely virtual offseason and a condensed training camp with no preseason games.

Berry cut 24 players to get to the regular-season limit of 53, but the departed didn’t include a tight end.

In deference to new coach Kevin Stefanski’s infatuation with tight ends — he used at least two on a league-high 57 percent of snaps last year as coordinator with the Vikings — the Browns kept five: Austin Hooper, David Njoku, rookie fourth-round pick Harrison Bryant, Pharaoh Brown and Stephen Carlson. Brown and Carlson seemed to be competing for the fourth spot.

The roster remains fluid and the bottom could change with waiver claims Sunday and Monday, but allocating more than 9 percent to tight end is noteworthy.

“We want to be deep at positions that an offensive and defensive system emphasize, but it’s a credit to the players at those spots,” Berry said in the news release. “They’re good football players and they had strong camps and they earned those roster spots for the time being.”

“We share a vision of how this team is going to play, but also, we went into this process very open-minded and wanting to keep the best 53 players,” Stefanski said. “We didn’t have any hard, fast rules of how many we were keeping at any given position. The way the roster shook out is based on the performance of those players.”

Berry will study the waiver wire in search of upgrades.

“Roster management is 24-7, 365 days a year,” he said. “Certainly with the hundreds of players that are going to become available in the next 24 hours, we’ll always look to add depth and competition to the 53.”

The Browns kept only two quarterbacks — Baker Mayfield and Case Keenum — and are expected to bring back Garrett Gilbert on the practice squad if he clears waivers. A third quarterback who knows the system and can play in an emergency seems critical as the NFL tries to conduct a season during the coronavirus pandemic.

Defensive end Chad Thomas, a third-round pick of former general manager John Dorsey in 2018, was the biggest name among the cuts. The writing was on the wall when Porter Gustin, who made the team, passed Thomas on the depth chart during training camp.

Thomas played only 22 snaps as a rookie then had four sacks in eight starts and 16 games last year, but didn’t have much of an impact filling in during Myles Garrett’s season-ending suspension.

Cornerbacks A.J. Green and Donovan Olumba were also cut, which was a mild surprise given Greedy Williams (shoulder), Kevin Johnson (lacerated liver) and M.J. Stewart Jr. haven’t practiced in nearly two weeks. That seems like a good sign at least one of the injured trio will return and be able to play in the opener next Sunday in Baltimore.

Dontrell Hilliard lost his battle with D’Ernest Johnson to be the third running back behind Nick Chubb and Kareem Hunt. Hilliard played 25 games over the last two years as a third-down back and kick returner. He had 13 rushes for 49 yards and two touchdowns last year, adding 12 catches for 92 yards.

The practice squad was expanded to 16 players this year because of the need for roster flexibility during the pandemic. The Browns will likely try to bring back several of the cuts, but the players must clear waivers and be willing to return.

Of the 53 players to make the team, 33 returned from last year, 11 were added through free agency, six were drafted in April, two were acquired in trades and one claimed off waivers. Second-round safety Grant Delpit was the only member of the draft class not on the active roster. He’s on injured reserve after rupturing his Achilles tendon.

“Going all the way back to April when we first started talking about this rookie class, I think we have smart, tough football players,” Stefanski said. “I know every club across the league wishes there was a longer runway but I’m excited about this group of rookies based on how they work. They make a mistake, we identify it and correct it and you don’t see the same mistake twice. I think it’s a class that really understands how we want to play football. I’m excited about them.”

Berry acknowledged the challenge of setting the roster without preseason games.

“We always take and evaluate all the training camp practices, evaluate every snap, every rep and really try and get as good of a feel for our guys as we can,” he said. “We worked closely with our coaches and solicited their feedback as well as from our pro staff and our scouts.

“We really spent a lot of time on our roster. Where it’s a little bit different is you don’t get the preseason games, but we feel like we had enough information, enough film to make informed decisions on all 53 guys who made the team based on the practices we had throughout this month.”