Notes: Ronnie Harrison excited to be with Browns and focused on winning after trade from Jaguars 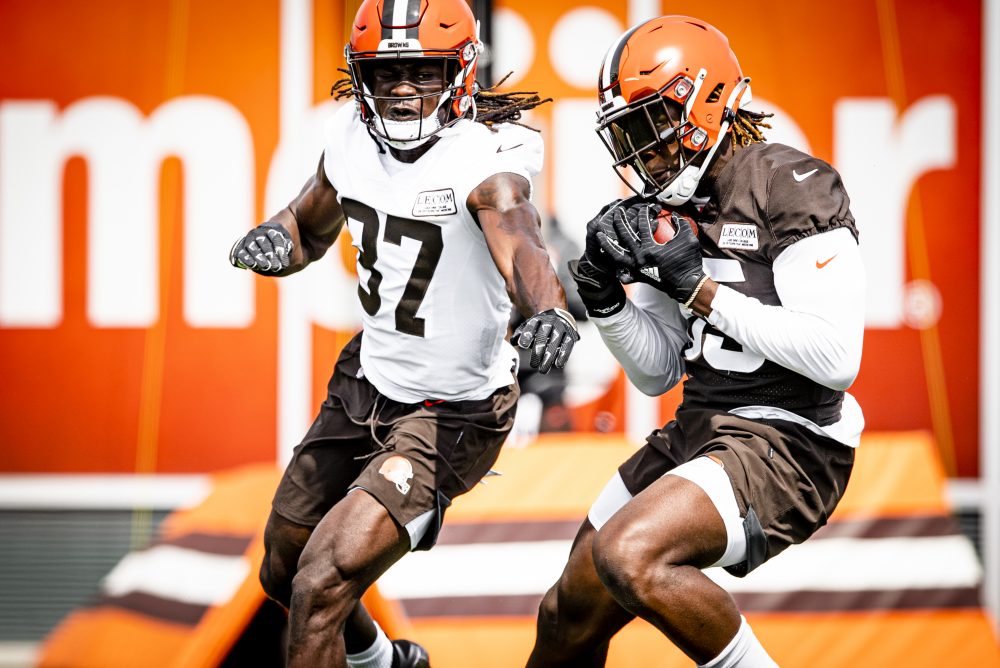 Safety Ronnie Harrison rushed to Twitter on Sunday after his first practice with the Browns. He couldn’t wait to tell the world how excited he was to have a new home after being traded from the Jaguars on Thursday for a fifth-round draft pick.

“Really was just saying just relieved to be out of Jacksonville and just happy to be on a new team,” Harrison said Monday. “This is a new team. I do not think a lot of people really understand that. With the coaches and stuff all the way down, this is a new team. The players have been here, but this a new team.

“We all want to win. The playoffs is the goal. Coming in and working hard every day is the goal. I was not throwing shots at the Jaguars or anything like that. Just happy to be out of Jacksonville. Happy to be here. New team. New goal. Ready to rock.”

So Relieved To Be Out Of Jacksonville And Around A New Team Who Wants One Common Goal! Thank You God! ✊🏿💯💯💯

The Jaguars have jettisoned many of their best and most recognizable players and appear to be in full rebuild mode after in 2017 leading the Patriots in the fourth quarter of the AFC championship game before falling 24-20.

“They have been letting everybody go. Let’s just be blunt,” Harrison said.

The Browns haven’t been to the playoffs since 2002 but appear on the upswing after a recent influx of talent.

“Really just being around a great group of guys,” Harrison said of his excitement. “There is a lot of talent on this team. Everybody knows that. From defense to offense, they have the guys that can make the plays.

“With this new coaching staff, just their energy and how upbeat they are just made me so excited when I first got in here. I am just ready to get to work. I really feel like this is the year we can change things around here.”

Harrison is expected to assume a significant role alongside safeties Karl Joseph and Andrew Sendejo. Rookie second-round pick Grant Delpit is out for the season after his Achilles tendon ruptured.

Harrison played mostly strong safety in 22 starts with the Jaguars in two seasons after being a third-round pick out of Alabama but said he also played free safety and nickelback. He said the Browns coaches have discussed using him at strong safety and in the three-safety dime package.

With the opener Sunday in Baltimore, Harrison and the coaches are trying to get him up to speed.

“He is smart. They are spending a lot of time together,” coach Kevin Stefanski said. “He is picking it up. He looked good out there today to me. We will determine over the next few days what that looks like this week.”

Harrison said he’ll be “somewhat ready” by Sunday but not 100 percent.

“There will be some mistakes if I were out there, but it is really based on the coaches,” he said. “I am just ready to help however I can, whether that be special teams or whatever it is.”

He’s putting in the work to be as prepared as possible.

“Every day in my playbook, like I have been, taking extra notes during the meetings and whenever Coach is talking I am writing,” Harrison said. “I am constantly adding stuff to my notes and constantly asking guys questions at practice on the field, just trying to eat everything I can up as quick as possible.”

Rashard Higgins has gone through a lot in years with Browns, but re-signed after talk with Baker Mayfield and grateful he did

Stefanski’s career as a head coach opens with the Ravens, who went 14-2 last season before losing their first playoff game.

“Really good football team,” he said. “Very well-coached. Balanced on offense, defense and special teams. It will be quite a challenge.”

Quarterback Lamar Jackson is the reigning MVP after throwing for 3,127 yards and 36 touchdowns and rushing for 1,206 and seven, and creates an incredible challenge in practice as the coaches try to simulate facing him.

“It is very hard. He is the MVP of the league, a special talent,” Stefanski said. “I think our coaches have some ideas in how to try to simulate that speed, that quickness and that ability. It is something that we have been talking about for a long time, and we are now starting the preparations for Baltimore so that is something that we are introducing to the players really as we speak.”

“I think we do,” he said. “When it comes to roster decisions, they are never easy, and those are conversations that are ongoing.”

Defensive end Myles Garrett announced the start of the “Tackle Thirst with Myles” campaign for the season and pledged to donate $5,000 to his NFL Waterboys program for every sack.

He’s the captain of NFL Waterboys, which provides clean water to communities in desperate need at home and abroad.

Garrett invites all fans and local businesses to join him in pledging money per sack, with the goal of raising $95,000 in honor of his No. 95 and to bring clean water to 9,500 individuals in desperate need by the end of the season.

“Every time I record a sack, it will be more than just a stat line. It will change the life of someone who has never had clean water,” Garrett said in the news release. “I hope that all Cleveland will join me and make a pledge so that together we can change the lives of 9,500 people.”