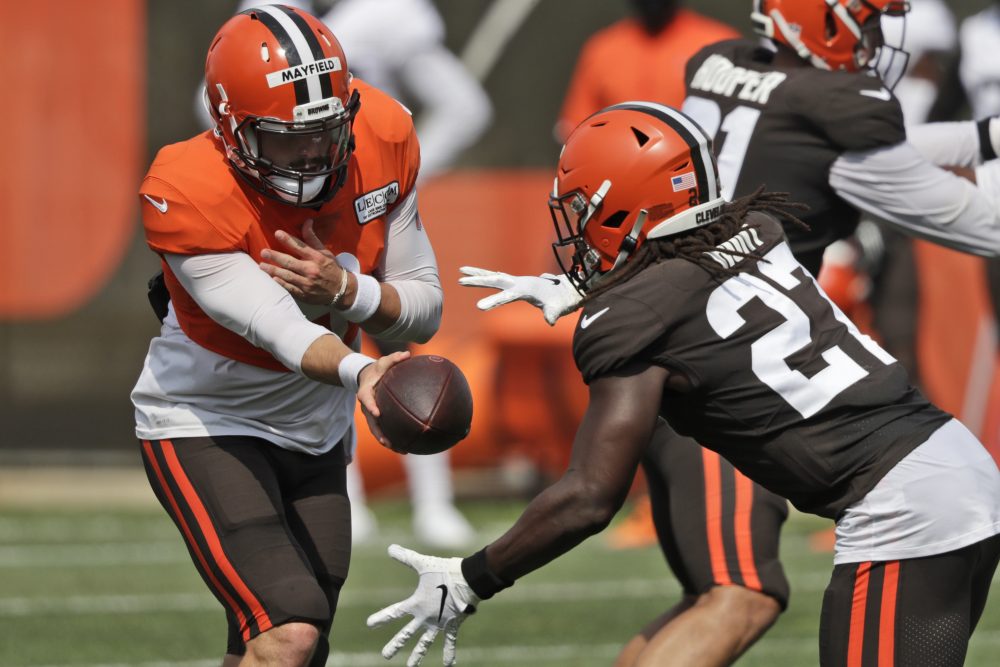 Kareem Hunt grew up dreaming about playing for the hometown Browns.

It became a reality last year, and he’ll get the chance to keep living the dream after signing a two-year extension through 2022 on Tuesday. The extension is worth $13.25 million with $8.5 million guaranteed, a league source confirmed to The Chronicle-Telegram.

“Cleveland has always been home to me, and putting on the Orange & Brown has been THE dream growing up,” the running back who was born in Elyria wrote in a long post on Instagram. “Being able to make it official, and play my heart out for the city I love for the next few years is a blessing.

“Thank you to Mr. and Mrs. Haslam, Andrew Berry, Coach Stefanski and the entire Browns’ organization for continuing to believe in me through the process, and as an integral part in the offensive scheme.”

The Browns took a chance on Hunt when he had been banished from the league, and now they’ve made a commitment to him.

Hunt joined the Browns in February 2019 after he had been cut by the Chiefs during the previous season when video was released of him shoving and kicking a woman in the hallway of a Cleveland hotel.

John Dorsey, Cleveland’s general manager at the time, met with Hunt and convinced owners Dee and Jimmy Haslam to give him a second chance.

They knew a suspension was coming, and Hunt was sidelined by the NFL for the first eight games of 2019 for a pair of off-field altercations, including the aforementioned one.

Hunt, 25, returned for the second half of last season and rushed 43 times for 179 yards and two touchdowns and caught 37 passes (third on the team) for 285 yards and a touchdown.

He then put his career in jeopardy again, as he was pulled over for speeding in Rocky River in January and a small amount of marijuana was found in his car. He was given a ticket but wasn’t cited for the marijuana. He admitted to the officer he would’ve failed a drug test.

The Browns kept Hunt, signing him to a restricted free agent tender, but Jimmy Haslam said his actions were “not acceptable. He’s got to do better.”

“I’m blessed that the Browns gave me another opportunity,” Hunt, who was raised in Elyria before moving to the East Side and attending Willoughby South High School, said in June. “So, yes, I’m lucky to have another opportunity to play football. You never know. Honestly, I’m just blessed to play the game, so I’ll always feel lucky to play football. I know any second it can be gone.”

After a strong training camp, Berry secured him through 2022. The Browns aren’t ignoring Hunt’s off-field history but counting on him to keep doing better.

“Kareem Hunt is a core component of our offense. He has been a great teammate, outstanding worker, and steadfast in his desire to have success in his hometown for the long term,” Berry, the first-time general manager, said in the news release. “Personal growth is often times non-linear but Kareem has remained committed to becoming the best version of himself and we are proud of the redemptive strides he has taken. He understands the opportunity he has in front of him — provided he maintains his current personal trajectory — and we look forward to the contributions he will continue to make to our team.”

The season starts Sunday in Baltimore, and Hunt will be the No. 2 back behind Nick Chubb, who finished second in the league in rushing last year with 1,494 yards.

“And, of course, a BIG thank you to the entire DAWG POUND for welcoming me back home,” Hunt wrote. “I promise to continue to push and work hard to bring a championship here for you all, representing the best team in the NFL, and make a lasting impact in the community and on the field.”

Chubb and Hunt give the Browns two of the best backs in the league, and it’ll be interesting to see how first-year coach Kevin Stefanski uses them.

Chubb’s rookie contract runs through 2021, so the Browns have time to decide if they can afford to extend him, too. Chubb was the team’s best player last season and is admired and respected by coaches and teammates for his work ethic and selflessness.

He worked out with Hunt for a bit in the offseason, including running a hill in Westlake.