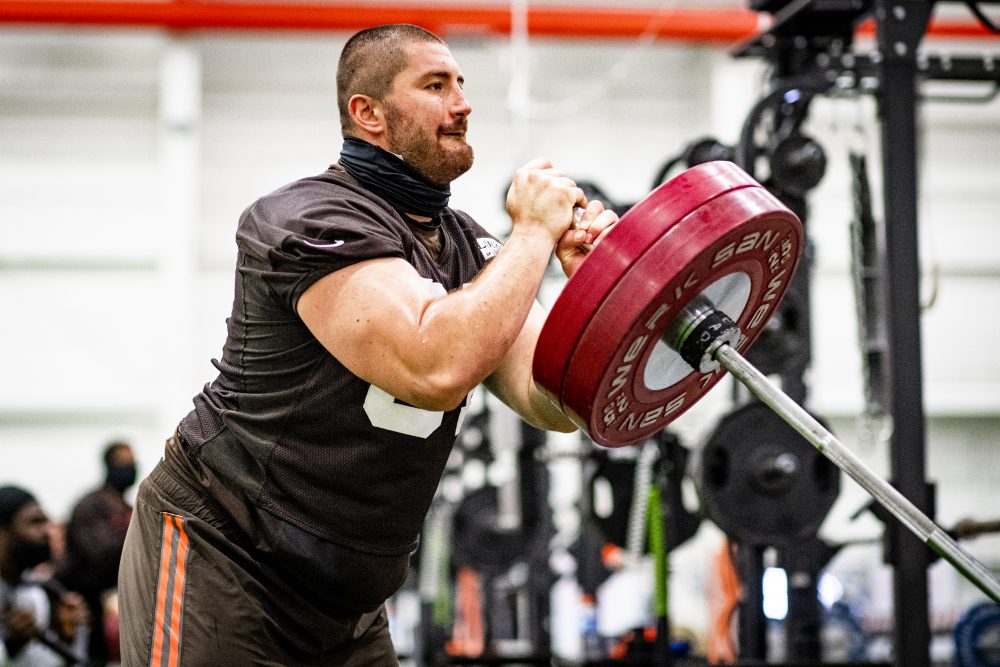 BEREA — Center JC Tretter hasn’t missed a game in three years with the Browns and doesn’t expect the streak to stop now.

Tretter chose to have arthroscopic knee surgery Aug. 13 when his right knee flared up following his return to Berea after the remote offseason. He said it’s tough to pinpoint the exact cause of the injury and could’ve tried to manage the pain and play through it but decided surgery gave him the best chance to be back for the opener Sunday in Baltimore.

“We put a plan in place and we continue to push through that and make sure we are checking all the boxes,” he said. “We will continue to do that the rest of the week, make sure everything is working right and we can continue moving forward.”


Tretter missed all of training camp — rookie fifth-round pick Nick Harris replaced him — but practiced for the first time Monday and again Wednesday. He was listed as limited on the year’s first official injury report, and coach Kevin Stefanski wasn’t ready to declare him ready.

“We will see how JC looks today and really will not make a determination until later in the week,” he said before practice.

Tretter and left guard Joel Bitonio have played every snap since Tretter signed as a free agent in 2017.

“You just want to take advantage of every chance. You’re not going to play forever. A lot of it’s a pride thing of making sure you’re out there available. That’s the one real statistic you can have as an offensive lineman is availability. You always want to be available for your team and help your team win.”

Running back Nick Chubb is looking forward to running behind Tretter, who said he’s not worried “at all” about having the necessary chemistry with his linemates.

“It’s huge for us,” Chubb said. “JC’s been playing this game for a while. He’s an older vet, he’s wise, he’s very athletic, he makes the right calls.

“It’s a hard position and he’s a baller. We’re all happy to have him back.”

The two-year, $13.25 million extension, including $8.5 million guaranteed, the Browns gave running back Kareem Hunt on Tuesday shows the organization trusts him to stay out of trouble off the field. That’s significant given Hunt’s eight-game suspension last year for two previous altercations, including pushing and shoving a woman.

“He has made sure that he is living the right way and doing the right things, and that is obviously a big part of this,” Stefanski said.

“We are all extremely happy for Kareem,” quarterback Baker Mayfield said. “Proud of him for the work he has put in and for the changes he has made. To be here in his hometown, everybody is happy for him.”

Hunt thanked everyone in the organization “from top to bottom” and singled out former general manager John Dorsey, who drafted Hunt with the Chiefs and signed him with the Browns in February 2019.

“I respect them a lot for giving me another opportunity,” he said.

#Browns DBs going through drill as they prepare for #Ravens. pic.twitter.com/DpajwbAHu3

Tretter, who doubles as president of the NFL Players Association, wants everyone around the league to remain vigilant as they attempt to play a full season during the coronavirus pandemic.

“So far we have done a really good job, but something to remember is previous successes do not mean anything in the future,” said Tretter, who originally was living in the team hotel to protect his pregnant wife but has moved home. “We can do all the right things for these last six weeks to get this point, but being successful moving forward comes from doing the right things continually.”

Stefanski has promised to announce before the season whether he or coordinator Alex Van Pelt will call the plays. He still wasn’t ready Wednesday.

“No, I will get to that, though,” he said. “I think it is interesting, there is gamesmanship. It is something that we will announce when we feel appropriate.”

He also wouldn’t “speculate” on if he’d call a game much differently than Van Pelt would.

“We don’t know those two guys, per se, as play callers too much,” he said. “They both have experience, but it’s not a vast amount of play-calling experience. So we’re going to play against the system and the players. And whatever plays are called, hopefully we can defend them.”

Harbaugh acknowledged it’s a challenge preparing for the new offensive and defensive systems of the Browns without any preseason games to scout.

The Browns filled out the expanded 16-man practice squad with tackle Greg Senat and running back John Kelly.

** The pandemic caused the NFL to alter its roster rules, including allowing teams to protect four players on the practice squad every week so another team can’t sign them to the active roster.

“I think a lot of factors go into it,” Stefanski said. “It may vary each week.”

Notes: Ronnie Harrison excited to be with Browns and focused on winning after trade from Jaguars
Notes: Sheldon Richardson says it’s like Lamar Jackson “is playing ‘Madden’ out there”