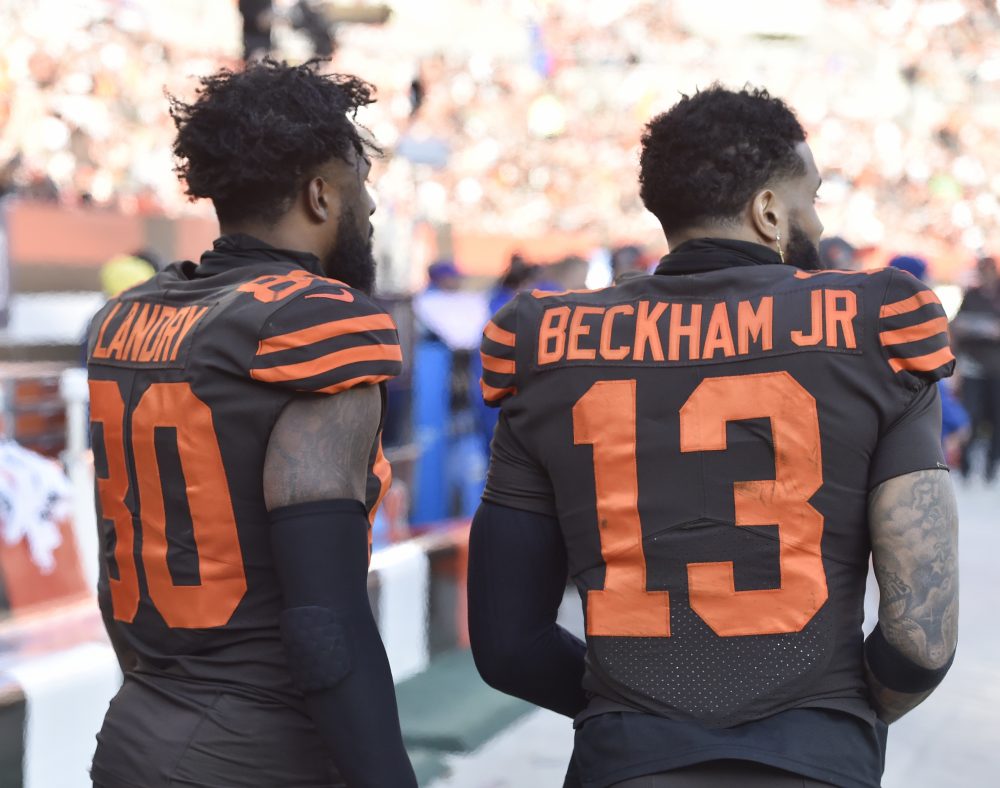 BEREA — Odell Beckham Jr. and Jarvis Landry appreciate being able to do the mundane again.

The best friends each exceeded 1,000 receiving yards last season but weren’t themselves after reuniting with the Browns. Beckham dealt with a core muscle injury that robbed him of his elite burst, and Landry had a hip injury that kept him from refining his craft during the week.

They had offseason surgeries and expect greatness this season, which starts Sunday in Baltimore.

“Being able to have the confidence that a guy like he has, to be able to come out here each and every day and use his gifts and not feel hindered or not feel restricted by anything that might be going on with his body,” Landry said Thursday of Beckham. “It is good to see him out here making plays, dominating.”

“Jarvis looks great,” Beckham said. “He has always been a phenomenal player. I do not think we are going to see anything less than phenomenal.”

Landry tried to temper expectations of him, as he’s only seven months removed from the extensive surgery. He got a few days off during training camp to manage the rehab process and left the field during one practice but wasn’t listed on the team’s official injury report Wednesday or Thursday, which means he was a full participant in practice.

“The biggest thing was practice,” he said. “I am a big firm believer in practice and getting those reps in practice out there with the guys and getting the looks and being comfortable with everything going into the game weeks.

“I am looking forward to having a season where I can actually be out there practicing more and not worried about an injury and be able to take the field on Sunday with a clear head and just going out there and make plays.”

Landry said he’s still improving and working to make sure he stays healthy.

“It is one of those things that the further out I get from surgery, the better I will continue to feel,” he said. “Right now, I am just doing everything possible to be able to come out here, work as hard as I can each day and make sure I take care of my body.”

Landry, who made his fifth straight Pro Bowl, played 94 percent of the snaps last season, so it’ll be interesting to see how much, if at all, new coach Kevin Stefanski restricts his playing time early in the year. Rashard Higgins and KhaDarel Hodge would be the candidates to give him a rest.

Beckham was declared 100 percent healthy before camp and looked like his old self, including making his trademark one-handed catches. He caught 74 passes for 1,035 yards and four touchdowns but never got in complete sync with quarterback Baker Mayfield, at least in part to a lack of practice time.

Mayfield not making excuses, out to prove he’s better than he showed in 1st 2 years

So Beckham expects the connection to be improved.

“For one, I can run,” he said. “I can lift my leg up on a table. It is crazy for me to look back and think about kind of just how I made it through the season last year because there were little motions that I could not even do, much less go against the best of the best week in and week out.

“Just being able to run and be healthy, I think it makes it a lot easier for him. Now this is the second year that we have been with each other. We both are just taking strides. Both have been through a lot. The talks I have had with him, I know he is hungry and ready. Just an overall feeling of we both want to be great. He has looked great to me. I think Baker is ready to have a big year.”

Beckham obviously hasn’t stopped making predictions, but he backed off a proclamation that went way awry.

“I think it is selfish for me to say that 2020 is going to be my year, and if I would have known that 2020 would have been a year like this, I do not think I would have ever said that,” he said. “It has been a tough year for all of us emotionally — pandemic, the world that we are living in. It has been tough on everybody.

“I think the best thing that this world could do would be to finish this year strong and just find a way to make it the best that it has ever been. Kind of just having that mindset of just being great. That is just for the world in general.”

Beckham has too much spirit not to be excited for the start of the season. New coordinator Alex Van Pelt sees the energy.

“I know he feels great,” Van Pelt said. “He has been working his butt off in camp so far. I know he wants to be successful this season. Coming off of last year not feeling great the whole season, I think he is really looking forward to the opportunities he will have this year.”

Landry might not be there yet but can’t wait until the day he and Beckham are 100 percent.

“It is something that gives us opportunities to make more plays and win more games,” Landry said. “That is what we are looking to do here this season.”

The star receivers are only part of a constellation of playmakers in Cleveland’s offense. Running backs Nick Chubb and Kareem Hunt and tight end Austin Hooper give Stefanski, Van Pelt and Mayfield a handful of options.

“The training camp gave us the idea of how we are going to use guys within the system,” Van Pelt said. “Definitely we were trying to figure out how guys fit and play to the strengths of our guys. Now we have a really good idea about where each guy fits and what roles they will play.”

Landry won’t mind if the running game carries the load.

The return to health, another year with Mayfield and a new coaching staff have renewed hope in Beckham and Landry, and defensive tackle Sheldon Richardson has noticed.

“Confidence is up for the boys,” he said. “Juice (Landry) is definitely one of the ones who keeps me going and keeps the juice going for the offense. Odell is definitely more confident in the offense this season.

“Just hoping that those guys go in there and score a lot of touchdowns.

Baker Mayfield not making excuses, out to prove he’s better than he showed in 1st 2 years
Season Preview: Mature beyond his years, Kevin Stefanski was destined to become a head coach