Season Preview: Mature beyond his years, Kevin Stefanski was destined to become a head coach 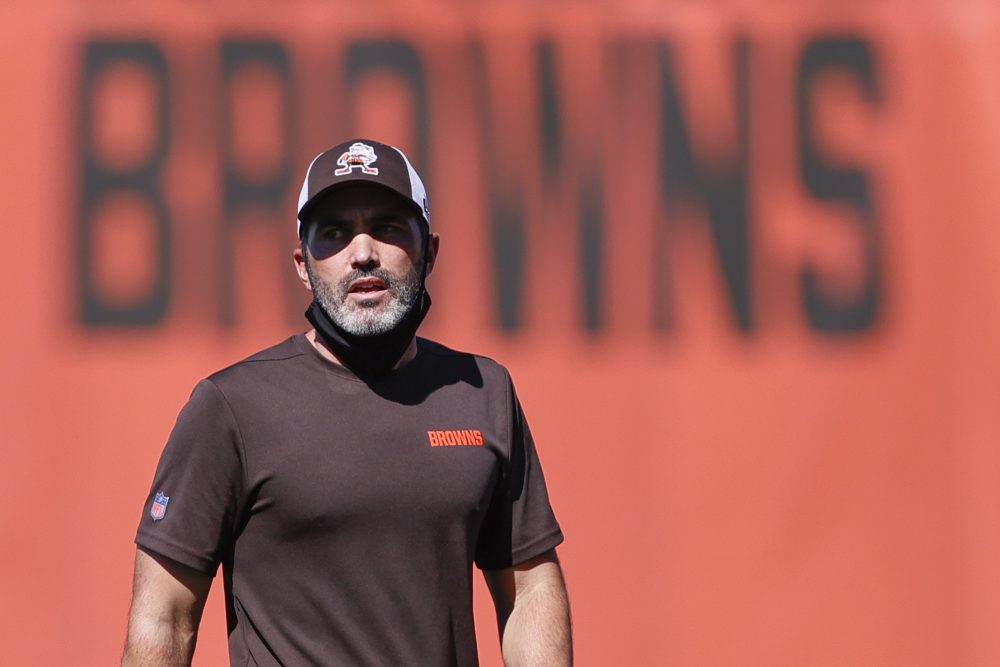 Kevin Stefanski wasn’t a typical little boy. Most preschoolers don’t have the discipline and patience to think before acting, but Stefanski was already weighing the pros and cons of certain scenarios.
“He stays in the moment and stays in the situation, assesses it and goes from there,” his father, Ed, told The Chronicle-Telegram by phone Sunday. “He’s been that way since, it’s crazy to say, since he’s 3 or 4 years old. He’s always had common sense, thinking things through at a very young age. More mature than I am, that’s for sure.”
The young Stefanski even served as a sounding board for his mom, Karen.
“It was funny because obviously working and coaching and all the things I was doing, my wife raised the kids,” Ed said. “He was always there to, I guess, be the one she could bounce things off. That’s kind of strange, but that’s the truth.”
Stefanski seemed destined to be a coach. Ed is senior adviser to Detroit Pistons owner Tom Gores and a former NBA general manager. And Stefanski was a safety at the University of Pennsylvania and has impressive self-confidence.
But nothing could’ve prepared him for the last six months in his first chance to be a head coach after Browns owners Dee and Jimmy Haslam hired him in January.
Before free agency began in March, the NFL went on lockdown due to the coronavirus pandemic. The offseason program was moved entirely online, meaning no meetings or practices at Browns headquarters, just Zoom sessions over a computer.
If that weren’t enough for the 38-year-old to process, he also had to console, calm and inspire his players after the deaths of George Floyd, Breonna Taylor, Ahmaud Arbery and, more recently, the shooting of Jacob Blake. Racial injustice in America became a mandatory conversation across the NFL, and Stefanski encouraged action from his team and took it himself.
The unique challenges of 2020 would be too much for some coaches.
Not Stefanski, the fifth coach hired by the Haslams since 2013.
“He’s been tremendous,” quarterback Case Keenum said. “There’s obviously nobody better in this situation to be a head coach. As detailed as he is and getting the work done and putting together a plan and following through with the plan, and as the situation evolves and changes, still being able to accomplish the goals he set out to do.
“Man, he is taking it in stride and he’s doing a phenomenal job.”
Just another reason for Papa to be proud.
“I guess I should say I’m surprised but I’m not,” Ed Stefanski said. “That’s who he’s been his whole life.”

A STRING OF ADJUSTMENTS
Stefanski is a people person. He’s clever, makes connections easily and wants to lead.
But the same guy who flew to Austin, Texas, to establish a relationship with quarterback Baker Mayfield didn’t meet most of his players until late July when they were finally allowed to report to Berea. And because of the ongoing strict COVID-19 protocols, Stefanski still hasn’t held a full-team meeting in the auditorium designed for them.
“I don’t know if we’re going to this year,” said Keenum, who spent 2017 with Stefanski in Minnesota. “It’s just so strange.”
The strange doesn’t stop in 2020.
Stefanski wears a mask everywhere he goes at the facility, including onto the practice field. He was forced to miss a camp practice after he and more than a dozen players and staff received false positives on their daily virus tests. And the preparation for the season included no preseason games and a condensed training camp.
“He is always at his very best when things are not quite right or the circumstances are difficult,” pass game coordinator/receivers coach Chad O’Shea said.
The unpredictable journey began on Zoom, where Stefanski and his staff installed new offensive and defensive systems and monitored the players’ individual workouts. Not only did he have to keep the players’ attention over video, he had to create chemistry.
“We have team meetings and he kind of has a way for (building) camaraderie,” cornerback Denzel Ward said. “We have what is called the four H’s and just kind of getting to know guys, explaining our history and things about ourselves that we may have not known about our teammates before.”
The genesis for the 4 H’s — history, hero, heartbreak and hope — was to “come together while apart.” Stefanski got the idea from a high school friend, Jimmy Martelli, the director of operations for the VCU men’s basketball program.
“I just thought it would be helpful to do that in a virtual setting while guys are not spending a ton of time in the locker room together,” Stefanski said. “And it has been unbelievable to hear some of the stories, what people have come from and where they are going.”
Stefanski has plenty of ideas but he’s also willing to listen and learn. A perfect example is adopting Gary Kubiak’s wide zone run scheme and play-action passing game in 2019 when Stefanski was offensive coordinator for the first time with the Vikings and Kubiak was hired as assistant head coach/offensive adviser. The Browns offense will look a lot like the old Texans and Broncos systems run by Kubiak.
“He is a guy that is not an ego guy,” special teams coordinator Mike Priefer said of Stefanski.
Listening and learning is vital in the fight against racial injustice.
Stefanski held discussions and encouraged action by the players. He took the message to heart, attending a protest in Avon and visiting the Tamir Rice memorial in Cleveland with other members of the organization. He also started a social justice committee and shortened a practice so the players could form an action plan they revealed Aug. 30.
“He’s been open-minded about everything,” defensive tackle Sheldon Richardson said. “He says for himself it’s a learning experience, he’s never had to go through anything like this before.
“He’s been effective, they’re having meetings every other day about something going on in the world. I hear guys talking about that a lot. So he’s handling it pretty well.”

A HEAD FOR FOOTBALL
Stefanski was an off-the-radar candidate when he interviewed for the Browns job after the 2018 season. He had never been a full-time coordinator and had only called plays at the end of that year after John DeFilippo was fired.
Stefanski finished runner-up to Freddie Kitchens, who went 6-10 in his lone season, but the seed was planted for a future with the Browns. His Ivy League education and appreciation for data fit with the front office, and he already had a bond with Andrew Berry, who was hired as general manager after Stefanski was in place.
Stefanski was the quarterback at St. Joe’s Preparatory School — the St. Ignatius of Philadelphia — and an honorable mention All-Ivy League safety at Penn. As a freshman he called the defenses and made the presnap adjustments.
“He was like having another coach on the football field,” said Penn coach Ray Priore, who was the coordinator and defensive backs coach during Stefanski’s time. “Very, very much of a cerebral kid. Understood the game and his maturity level was just at a whole different level at a very young age.”
Ed Stefanski is a scout at heart and not afraid to evaluate the athletic ability of his four sons. He said Stefanski faded out of baseball early and wanted to be Jason Kidd on the basketball court but realized in high school he didn’t have the offensive skills. After a strong football career at Penn, the focus became coaching.
“I always told him, going into coaching is great, try coaching at a young age,” Ed said. “You can be an old man and go into management. But coaching’s more fun.”
Stefanski got his communications degree then worked for a season as Penn’s assistant director of football operations. He had spent the 2005 training camp with the Philadelphia Eagles in the operations department, working with offensive coordinator Brad Childress, who hired Stefanski with the Vikings when he became coach in 2006.
Stefanski, a Philly guy through and through, became a Minnesota man. He spent 14 years with the Vikings, rising from assistant to the head coach to assistant quarterbacks coach, tight ends coach, running backs coach, quarterbacks coach and coordinator. He survived two head coaching changes and kept getting promoted.
Keenum took over as starter in Week 2 in 2017 and went 11-3 to lead the Vikings to the playoffs with Stefanski the quarterbacks coach under coordinator Pat Shurmur, who coached the Browns in 2011-12.
“Coach Shurmur was kinda big-picture, calling plays, ‘this’ll all work out, here we’ll make a play, we don’t have to have all the answers, we just have to make the right plays at the right time,’” Keenum said. “And then I was kinda OCD about certain things and needed answers on different pressures and the protections that we had, and Kevin would answer all my questions. He kept me in the right frame of mind weekly.
“When I left, I was like, I want to work for this guy again. I was thrilled that he got the job.”


GET TO WORK
The offseason challenges were different but Stefanski’s approach stayed the same. Put his head down and keep working.
“He tries to be player-friendly, but there’s too much work in there for players to sit there and say you’re player-friendly,” Richardson said.
Even with his first game looming Sunday, Stefanski wouldn’t acknowledge the personal milestone.
“I get so wrapped up in the week and in the process. It is hard for me to look too far ahead and too far behind,” he said.
His dad can.
“This Sunday watching my son’s going to be a little surreal, to be honest with you,” Ed said. “You always wish the best for your children, but this is special.”
Mayfield appreciates the no-BS approach of Stefanski, Jimmy Haslam loves that he didn’t use the virus as an excuse and running back Nick Chubb praised his communication skills, including telling the team to “embrace the suck” of the circumstances.
“I really respect him because he does not hold anything back,” receiver Jarvis Landry said.
Stefanski has been buttoned-up with the media on the Zoom calls, and Ed said he isn’t likely to let his guard down — unless he’s hanging out with his three brothers.
“One of the parts of maturity is the ability to really be sort of cool and calm and continue to always be ready,” Priore said.
Despite his youth and relative inexperience, Stefanski was confident he’d become a head coach.
“It says to me that he has been learning,” Keenum said. “In every job he’s ever had, he’s just adding things to the toolbox. All right, when I’m a head coach, this, this, this and this.”
“You have confidence when you’re prepared,” Priore said. “I really believe that Kevin has put everything into it in terms of preparing himself for this opportunity, has surrounded himself with the list of coaches that he has and their pedigrees.
“But you also lead from your heart, and I think that’s who Kevin is. I’m sure he’s put in time, effort and energy and he’ll give those guys everything that he can to make the program successful.”

Feeling healthier this year, Odell Beckham Jr., Jarvis Landry expect greatness from each other
Myles Garrett excited for return to field, not worried about how he’s perceived after suspension