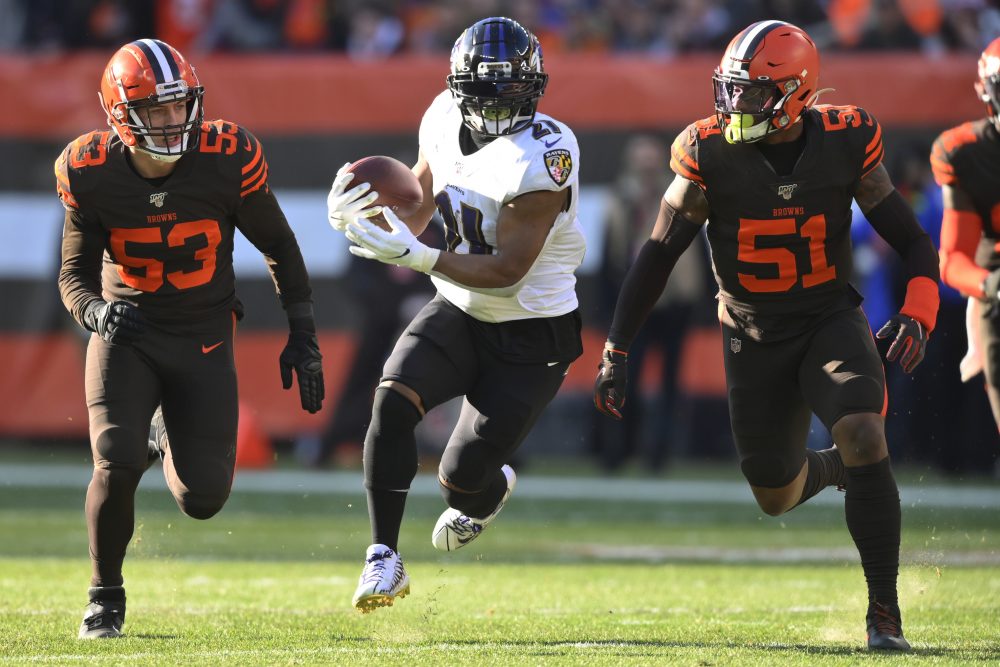 In the high-flying NFL of the 21st century, this matchup certainly qualifies as a throwback.

The Ravens broke a 41-year-old NFL record with 3,296 rushing yards last year, and their 5.53 yards per carry set the mark for a 16-game season. They ran it 596 times compared to 440 pass attempts. Quarterback Lamar Jackson led the way with 1,206 rushing yards, but running back Mark Ingram added 1,018, a 5.0 average and 10 touchdowns. Then the Ravens drafted J.K. Dobbins in the second round after he rushed for 2,003 yards for Ohio State in 2019.

The Browns counter with the backfield tandem of Nick Chubb and Kareem Hunt and new coach Kevin Stefanski’s wide zone scheme. (With him calling plays last year, the Vikings ran 476 times and threw 466.) Chubb finished second in the league last year with 1,494 rushing, averaging 5.0 yards and scoring eight touchdowns. His best game came in a win at Baltimore in Week 4 with 165 yards and three touchdowns. Hunt led the league with 1,327 rushing yards as a rookie in 2017, is healthy and signed a two-year, $13.25 million extension Tuesday.

The Ravens figure to have the advantage stopping the run. They ranked fifth a year ago, allowing 93.4 yards a game, while the Browns were 30th at 144.7.

The game might be decided on the ground, but the quarterbacks remain the main attractions. They’re also easy to compare. Baker Mayfield won the Heisman Trophy in 2017 and was the No. 1 pick of the 2018 draft, and Jackson won the 2016 Heisman and was drafted 31 picks after Mayfield.

Jackson is the reigning MVP after becoming the only quarterback in NFL history to throw for 3,000 yards and rush for 1,000 in the same season. He led the Ravens to a 14-2 record, including 12 straight wins, and Ingram said he’s “a million times” better this year.

“I am going go out there prepared for a Lamar 2.0,” Browns defensive end Myles Garrett said. “If he is coming out faster or with a better arm, we just have to play him like we would last year. Play him as best we did and to the best of our ability.”

Mayfield needs to be miles better than he was a year ago for the Browns to approach their goals in 2020. He ranked 31st in completion percentage (59.4), interceptions (21) and passer rating (78.8), as his accuracy and composure in the pocket dipped. The Browns can’t expect Mayfield to challenge for MVP, but he needs to play like a top-15 quarterback.

With playmakers aplenty, it’s up to Kevin Stefanski, Baker Mayfield to get the most out of them, make sure they bring wins

Injuries have left the Browns short-handed at cornerback — starter Greedy Williams and nickelback Kevin Johnson were ruled out — but that shouldn’t be a huge factor in this matchup. The Ravens have made additions at wideout, but the offense is carried by the running backs and tight ends.

That could prove to be an issue for the Browns defense. The linebacking corps was in transition during the the offseason and is loaded with questions. The most pressing: Can they cover? Without Mack Wilson (knee), B.J. Goodson, Sione Takitaki and rookie Jacob Phillips will be asked to stick with Baltimore’s talented crop of backs and tight ends despite limited experience in that role.

Mark Andrews will provide the toughest test. Mayfield’s former Oklahoma teammate led NFL tight ends with 10 touchdowns last year to go with 64 catches and 852 yards. Coordinator Joe Woods may substitute a safety in certain situations, but the linebackers won’t be able to hide.

Player in NFL history with 80 catches and 700 receiving yards in each of his first six seasons: Jarvis Landry

Ravens who’ve been to the Pro Bowl

THE PICK: The Ravens are a brutal matchup for a first-time coach who didn’t have a real offseason or a preseason. A bunch of points are needed to beat Lamar Jackson and the powerful Baltimore offense, and that’s too much to ask for a Browns offense that won’t be clicking on all cylinders. Ravens 31, Browns 20.

Jim Ingraham: Browns’ return to glory begins with the return to their classic uniforms
Season Predictions: After getting carried away last year, I’m picking 8-8 for Browns