Season Preview: With playmakers aplenty, it’s up to Kevin Stefanski, Baker Mayfield to get the most out of them, make sure they bring wins 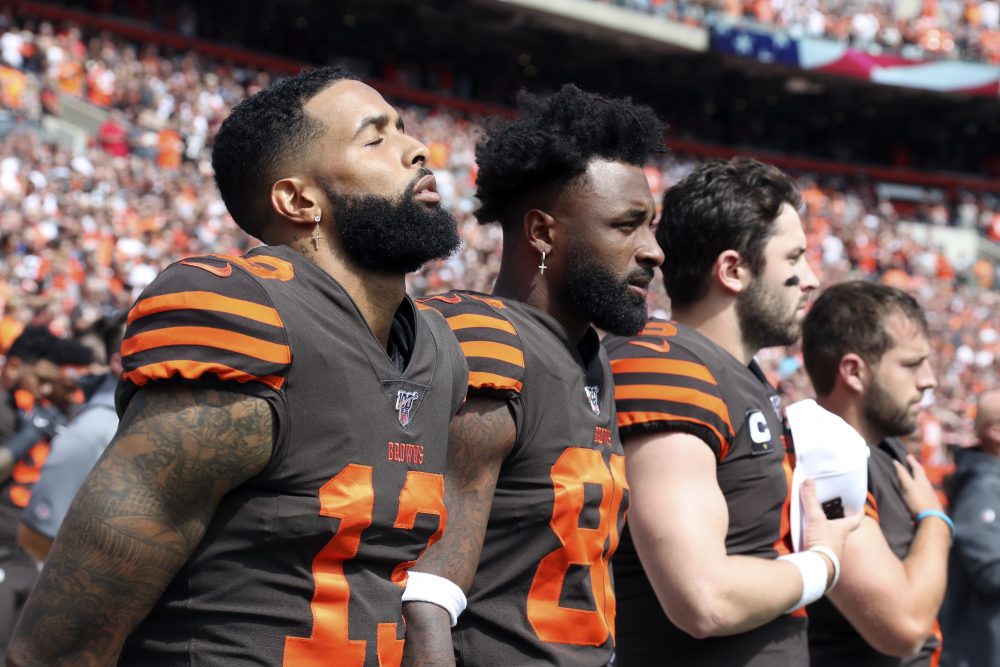 Odell Beckham Jr. has the blueprint for keeping all of Cleveland’s playmakers pleased this season.
“You just throw for 600 yards each game and rush for 200, and I think everybody will be happy,” he said during training camp.
Beckham’s tongue was planted in his cheek, because he knows those numbers are not of this planet. But the answer, and the question that elicited it, speak to the tremendous talent on the Browns offense and the potential for discontent if new coach Kevin Stefanski and coordinator Alex Van Pelt can’t figure out how to maximize it.
General manager Andrew Berry’s priority in his first offseason on the job was to make quarterback Baker Mayfield’s surroundings as comfortable as possible.
Stefanski’s play-action system should mesh with Mayfield’s skill set. Veteran Jack Conklin at right tackle and rookie Jedrick Wills at left tackle should provide protection Mayfield can trust.
The rest of the equation is much sexier.
Berry kept running back Kareem Hunt on a restricted free agent tender, then gave him a two-year, $13.25 million contract extension Tuesday. Remember: Hunt is the backup to Nick Chubb, who had the NFL rushing title ripped out of his hands in Week 17 last year.
Berry signed Pro Bowl tight end Austin Hooper to a four-year, $42 million contract to leave the Falcons. With receivers Beckham and Jarvis Landry, a top-tier tight end can be considered a luxury, but not for Berry.
And while Stefanski vows to use a variety of personnel packages and alter them to exploit the specific opponent, Mayfield will look around the huddle at times and see Beckham, Landry, Hooper, Chubb and Hunt. That’s 12 total Pro Bowls, and 5,252 yards and 27 touchdowns a year ago. Mayfield referred to the full house as “dealer’s choice” in an interview on the team’s radio network.
“Very dangerous. There is talent everywhere you look on the offense when they come out there,” nickelback Kevin Johnson said.

THE DISTRIBUTOR
Someone has to get the guys the ball, and Mayfield is the man with the responsibility. Stefanski’s run-heavy, play-action scheme is designed to make the decisions and throws easier, but Mayfield still has to deliver.
For that, he’ll have to regain the accuracy that left him last season, when he ranked 31st in the NFL in completion percentage (59.4) and interceptions (21) in his second year. He was still wide and high with too many throws during camp this year as he tried to master Stefanski’s playbook after no offseason practices.
Mayfield insists he’s in a better place physically and mentally than a year ago, when he “lost himself” during the personal and team struggles. The No. 1 pick in 2018 who rarely lacks for swagger admitted doubting himself and wants to get back the Mamba mentality inspired by Kobe Bryant.
“I know how good I can be. And I think a lot of people have forgotten that,” Mayfield said on Building the Browns. “So I’m out to prove myself right, because I’ve always believed in myself, and I’m out to regain that.”
Defensive end Myles Garrett can relate. He ended last year on a six-game suspension for ripping off Steelers quarterback Mason Rudolph’s helmet and hitting him over the head with it.
“Just two young Texas boys who want to lead their side of the ball to success,” Garrett said. “He obviously wants to bounce back and have one helluva year, and I want to do the same. We are kind of in the same boat. We are competitive. We want to be the best that we can be, and we know that last year was not that.”
Receiver Rashard Higgins has been close with Mayfield since they were on the second team during the 2018 preseason. Higgins sees changes in his friend.
“He is more focused. I feel like he knows what he has to do,” said Higgins, who expects an even better Mayfield than the one who set the NFL rookie record with 27 touchdown passes. “I feel like there is a way better version that he is showing us that you have not seen yet. The time is Sunday. You shall see it.”
Backup quarterback Case Keenum was another of the offseason additions to support Mayfield. The veteran has had success as a starter and experience with Stefanski and will help prepare Mayfield every week.
Keenum’s been impressed with Mayfield’s leadership, including gathering receivers and tight ends in Texas during the offseason, and his arm strength on deep balls. Keenum believes the table is set for a bounce-back season.
“What I think is so great about his talent and the system that we’re putting in, he’s just got to go be himself,” Keenum told The Chronicle-Telegram. “I see him being himself and playing good ball. I’m excited to watch it, because I do think he’s poised to have a good year. His mindset has been spot-on, exactly what it has needed to be and should be.”
Chubb has seen and heard the difference.
“He has come back and is saying all the right things and not saying some things. It is great,” he said. “I have believed in Baker from Day 1, and nothing has changed my opinion of Baker. I know he is excited to get out there and show the world who he is.
“He is making the changes that need to be made. He is still making the big plays as Baker does, but he is just being smarter with the ball. That is all it came down to is protecting the ball.”

THE SYSTEM
Stefanski used multiple tight ends on a league-high 57 percent of snaps last year as Minnesota’s play caller. He likes to employ a fullback. The Vikings ran (476) more than they threw (466) with him calling the shots.
What does that mean for Beckham and Landry?
“You try to play to the strengths of your team, knowing that it is going to pivot every four or so weeks,” Stefanski said.
Beckham watched receivers Stefon Diggs and Adam Thielen prosper with the Vikings — Diggs in the Beckham role — and is convinced he’ll have opportunities with Stefanski at the helm.
“Definitely. It is funny because I watched the Vikings for so many years. Diggs is one of my favorite receivers,” Beckham said. “Just seeing him and then seeing him and Thielen and the things that they have done for years, it is truly impressive. I always was kind of wondering who was the one behind this, and we end up getting the guy. There is definitely something to look forward to.”
Stefanski’s scheme is similar to what Kyle Shanahan ran in Cleveland in 2014 and to take the 49ers to the Super Bowl last season. The rushing attack is based on the wide zone scheme, which sets up passes off bootlegs, play-action and misdirection.
There’s a lot going on.
“What we try to do on the offensive side, it may look difficult to the defense but it should be easy for the offense,” Stefanski said. “There are some things that you can do — alignments, motions, shifts — the goal is to confuse the defense and not the offense.”
He’s been reluctant to reveal how he’ll spread the touches but has been clear he’s more concerned with featuring players than running particular plays.

WINS ARE THE THING
Players want the ball. And when they don’t get it enough, many pout or complain. It happened last year under coach Freddie Kitchens when the game plan would fall apart after the first quarter, or Beckham wouldn’t be involved.
The overriding factor with Kitchens was that the Browns were losing. The team that had Super Bowl expectations went 6-10.
“There is nothing like having options, and some teams do not have as many as we do,” Landry said. “We understand that, but we also understand that having as many options as we do have, if you look at last year’s season, it only got us what? Six games winning.
“We have to find a way to put it together as players and play together, play for each other, no matter who is getting the ball, no matter who is not getting the ball, and create this unselfish system that we will need to win.”
Stefanski plans to attack the defense’s weaknesses each week, which could mean a rotation of offensive heroes.
“We have to know there is only one football, so every game everyone will not have a big game,” Hunt said. “As long as we win, that is the only thing that matters and that is the biggest thing.
“Some games, Odell might have 200 yards. Some games, Nick might have 400 yards and Jarvis might have 10 (catches).”
Beckham was reminded his scenario of 600 yards passing and 200 yards rushing was unlikely, and asked again how to keep all the playmakers happy.
“Just win,” he said.

Myles Garrett excited for return to field, not worried about how he’s perceived after suspension
After months of uncertainty, start of season brings relief and excitement