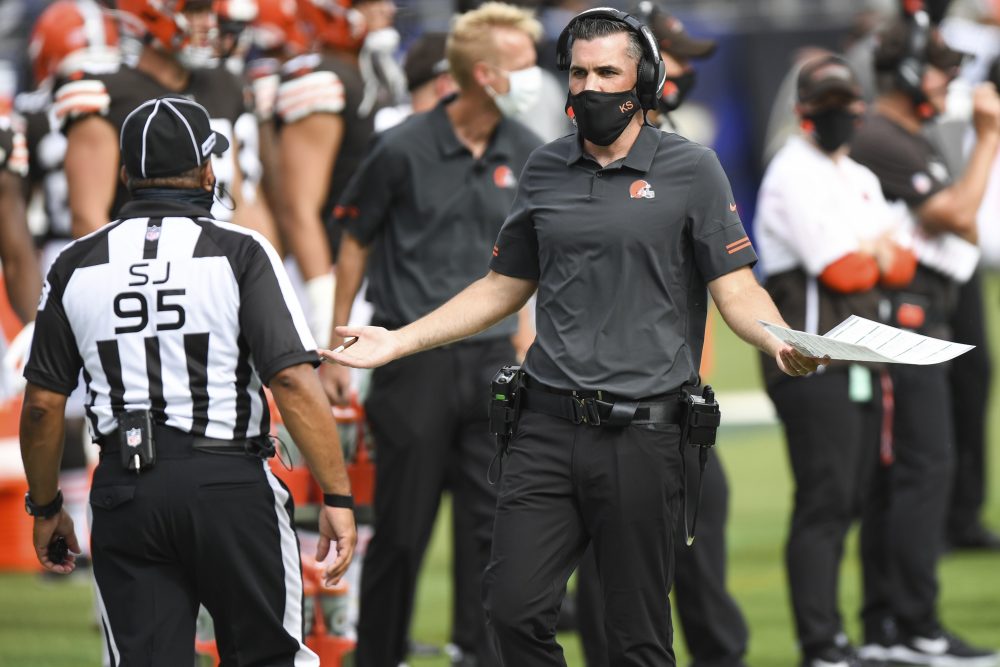 Sunday in Baltimore, Kevin Stefanski had his one and only chance to make a good first impression. How’d it go? Um …

Over to you, second impression!

If you didn’t know better, and the failed fake punt in the first quarter was enough to make you wonder … well, let’s not even go there.

Let’s go here: The honeymoon is over. The floor was swept, the champagne glasses removed and the folding chairs stacked about halfway through the Baltimore Ravens’ 99-yard touchdown march through the defenseless Browns defense in the second quarter of a 38-6 season-opening walloping of Cleveland, in a game that wasn’t nearly as close as the score indicates.

It was a rude and rather alarmingly easy waxing of the visitors by a Ravens team that spent most of the game doing whatever it wanted to do with little resistance from its helpless opponent.

It was also Stefanski’s first taste of the sour gruel served to so many Browns coaches before him.

The smiles and handshakes, vows and promises, toasts and salutes that accompany the arrival of each new Browns coach fade quickly, almost instantly, once the real games begin.

Stefanski’s honeymoon was a lengthy, but fractured one, thanks to the coronavirus and all the hurdles to team preparation it produced.

Eventually, though, the games must be played. Sunday, Stefanski said hello to his first game as coach, and four gruesome quarters later, he kissed his honeymoon goodbye.

The last time the Browns didn’t lose their first game of the season, Baker Mayfield was 9 years old and the Browns coach was Butch Davis. So we’re at 16 years, nine coaches and counting since the Browns started a season with the almost unfathomable record of 1-0.

For the Browns, losing Sunday’s game wasn’t necessarily the issue. Playing the way they played in Sunday’s loss was the issue. It wasn’t as bad as the previous coach’s debut last year, when the Browns racked up a ridiculous 18 penalties in a 30-point loss at home to Tennessee. But this one was still bad. It looked like the varsity vs. the freshmen.

There is such a category as playing well, but losing. The Browns avoided it Sunday. Not even close. The first clue was the first-quarter fake punt and subsequent fumble by the rumbling, stumbling Scottish Hammer, Jamie Gillan.

“That was my responsibility. It didn’t work out. Put that right on me,” Stefanski said.

One thing new Browns coaches tend to learn very quickly is the fine art of falling on their sword. There must be a pile of them in a closet in Berea. Stefanski, to his credit, took his plunge like a man.

“We’ve got a lot to clean up and we’ve got to clean it up in a hurry,” said the whiplashed coach, who gets a chance to make a second impression Thursday vs. the Cincinnati Bengals.

That’s not much time to prepare for a game, but the Bengals, like the Browns, aren’t much of a team. Stefanski, however, is right when he says he and his gridders have a lot to clean up.

Sunday’s embarrassing pancaking included the usual head-scratching moments and strategies that infect most Browns games, not the least of which was why the Ravens receivers were constantly wide open and why the Browns receivers constantly weren’t.

If you missed the game, yes, the Browns are still obsessively going overboard in trying to get the ball to Odell Beckham Jr., to little effect, the few times they do. Stefanski promised he’ll “get to the bottom of it.”

Mayfield was not awful, which is a step in the right direction from last season. A step in the wrong direction was a third-and-41 situation for the Browns offense in the second quarter (hint: they didn’t make it), and a missed field goal and extra point by kicker Austin Seibert, who bounced an extra point try off the upright, meaning he didn’t miss by much. Think baby steps.

The Browns’ fleet of tight ends were largely invisible, but this is a short week and they can’t fix EVERYTHING in three days.

Hopefully, though, by Bengals Thursday, Stefanski will have washed from his eyes the woe from his debut as a head coach and the grim realization of what he’s signed on for in Cleveland.

Commentary: The new guys may do something new … win
Analysis: Feeding the ball to Odell Beckham Jr. simply makes sense, but connection with Baker Mayfield must improve