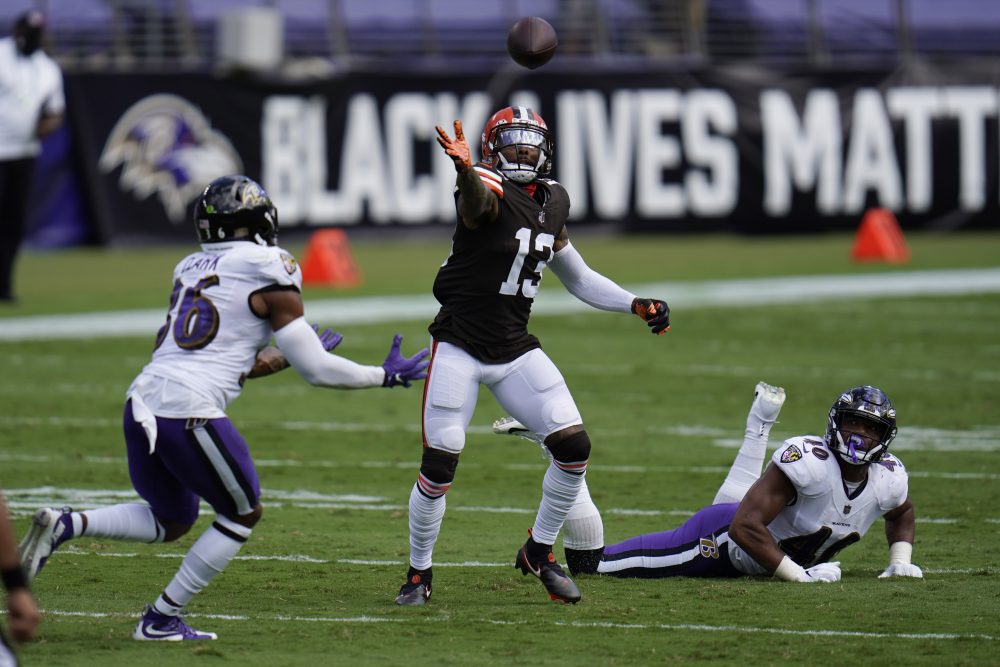 The Browns were in position to slash the deficit and go into halftime with the momentum.

Baker Mayfield looked to No. 1 receiver Odell Beckham Jr. on a quick out on third-and-2 that would’ve given the Browns a first down inside the 20-yard line with less than a minute left. The throw hit Beckham in the hands and he dropped it.

Beckham isn’t to blame for what followed — Austin Seibert missed a 41-yard field goal wide right and the defense allowed a 69-yard touchdown drive in 35 seconds — but he started the sequence that pretty much decided the game, as the Ravens led by 18 at halftime on the way to a 38-6 victory in Baltimore.

In a difficult opening matchup in which the Browns needed their stars to lift them, Beckham had little impact. He caught three passes for 22 yards on 10 targets.


“We did not connect a few times out there,” first-year coach Kevin Stefanski said on Zoom from Baltimore. “We have to get to the bottom of it obviously. Pass game requires precision from 11 guys.”

Beckham is healthy after being bothered all last season with a core muscle injury that required surgery in January. He wasn’t a factor early, but even after Mayfield made a concerted effort to get him the ball in the third quarter, it wasn’t good enough.

Beckham drew consecutive penalties on the Ravens that brought first downs, but he also lost his place and stepped out of bounds to nullify a catch. And he was called for a 15-yard face mask penalty after catching a bubble screen in the second quarter that was part of an ugly string of events that took the Browns from first-and-10 at Baltimore’s 29-yard line to third-and-41.

Mayfield overthrew an open Beckham deep on that play, and Beckham’s frustration was obvious. He wasn’t one of the five players made available on Zoom interviews after the game.

The Ravens boast a strong set of cornerbacks, led by Marlon Humphrey and Marcus Peters. They held Beckham to his sixth outing with three or fewer catches in 17 games with the Browns.

“The fact that we did contain their weapons was probably the key thing,” Ravens coach John Harbaugh said. “We kept the receivers pretty much under control, which was big, because we know how good those guys are.”

Defensive end Myles Garrett, No. 3 receiver KhaDarel Hodge and safety Ronnie Harrison kneeled during the national anthem, while Mayfield stood after announcing Saturday he had changed his mind.

“I respect all of my teammates’ decisions,” Mayfield said. “We talked about it, we had discussions and we are all on the same page. We are in this together in showing solidarity to try and unite instead of divide.”

Mayfield had the name of Julius Jones on the back of his helmet as players were allowed to call attention to social and racial injustice.

“A very sad story. A guy who is wrongfully incarcerated in the state of Oklahoma,” Mayfield said. “I hope I spread that message and I continue to do so.”

Garrett said his choice to kneel was “just a message” and he said the team didn’t know the Black national anthem was played before “The Star-Spangled Banner,” which is why they were in the locker room for the former.

Rookie left tackle Jedrick Wills, the No. 10 pick, left the game in the second half with a leg injury and didn’t return, but a league source told The Chronicle-Telegram it doesn’t seem serious. X-rays on the leg were negative, another source said, and the team should know more Monday.

“I thought protection for the most part was great all day long,” said Mayfield, who was sacked twice and hit four more times. “I thought Jedrick played well. Proud of Jedrick and how he played.”

Wills was penalized once for holding. Kendall Lamm replaced him after the injury.

** Rookie third-round linebacker Jacob Phillips exited with a right knee injury in the second half and didn’t return. He posted a picture on Instagram of the leg immobilized in the training room. He started and had a tackle.

“He’s got great potential,” middle linebacker B.J. Goodson said. “You saw him out there today flying around and getting after the ball. We can’t wait to have him back.”

** Tight end David Njoku (knee) also left and didn’t return. He had three catches for 50 yards, including a 1-yard touchdown.

The Browns signed veteran kicker Cody Parkey to the practice squad in case they need him in a COVID-19 emergency, but they might be tempted to activate him after Seibert went 0-for-2. Seibert, a fifth-round pick in 2019, missed an extra point off the left upright and was wide right on a 41-yard field goal attempt.

The special teams as a whole was a huge disappointment. They had two face mask penalties covering kicks, allowed a 38-yard kickoff return and a 17-yard punt return and failed on a fake punt.

“That did not work out, and you can put that right on me,” Stefanski said.

The Browns didn’t have any surprises on their inactive list.

Mayfield’s touchdown to Njoku was the 50th of his career and 10th for Njoku.

** Tavierre Thomas was the nickleback in place of Johnson and had a sack on a blitz.

** Hodge was the No. 3 receiver ahead of Rashard Higgins.

** JoJo Natson was the punt and kickoff returner. He returned one punt for a yard, while all the kickoffs were touchbacks.