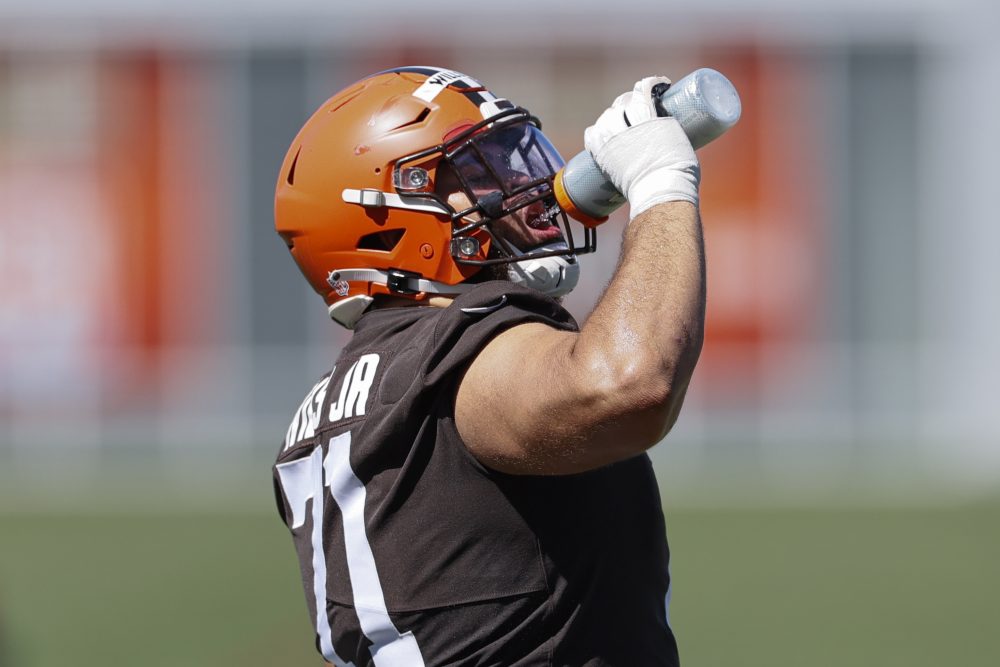 College football doesn’t have NFL Pro Bowlers.
Even the SEC.
As Jedrick Wills struggled with the technique transition from right tackle to left tackle in training camp, he became further discouraged when defensive ends Myles Garrett and Olivier Vernon exposed his deficiencies.
“Of course, because you come from a place in college where I just dominated everybody I went against,” Wills said. “It was easy and it was a walk in the park, and now you are going against these guys who are Pro Bowlers and some of the best pass rushers in the league. It gets frustrating at times, but you just have to learn from your losses.”
Wills was the No. 10 pick in April after three years at Alabama. He played right tackle for coach Nick Saban just like he had for Eric Shaw in high school in Lexington, Ky.
The Browns saw the necessary athleticism and footwork to feel confident Wills could move to the left side and protect Baker Mayfield’s blindside. In fact, general manager Andrew Berry dismissed the significance of the switch, saying “tackles are tackles.”
That may prove accurate in the long term. But with the Browns traveling to face the Ravens on Sunday, Wills hasn’t reached the ideal comfort level as he works on reversing his technique and adjusts to the varied and layered pass rushes of Garrett and Vernon.
Wills may have been the Browns player hurt most by the lack of offseason practices and preseason games.
“It definitely would have helped to get these things moving along way back in OTAs, if we would have had those with this COVID thing going on,” he said. “It would have definitely helped, but we have to adjust now and just keep moving forward.”

With playmakers aplenty, it’s up to Kevin Stefanski, Baker Mayfield to get the most out of them, make sure they bring wins

Coach Kevin Stefanski hasn’t wavered from the plan to start Wills from Day 1 but will likely have to adapt the game plan to help the rookie. Left tackle is arguably the second-most important position on offense, and if Wills is overmatched and left to fend for himself, he could sabotage what has the potential to be a high-powered offense.
“I guess I would say it is a boost in confidence just to know that they are still behind me, are pushing and have full faith in me to get the job done,” Wills said. “From my end, words can only do so much, so it is really up to me to just keep getting better and fix some things I need to work on.”
Shaw has no doubt he will. He described Wills as “hardworking, very intelligent and very intense.”
“I’ve been around some great players in my time of playing, and he is a special kid,” Shaw, who played linebacker for the Bengals, said by phone.
Shaw, who played Wills at right tackle because he had another Division I tackle, has no doubts Wills will be a success on the left side. He said Wills loves challenges and pointed to the decision to play for Saban as proof.
“He knew he was going to be pushed and pushed to a place where he can have an opportunity to go play at the next level,” Shaw said. “He embraced it.”
Wills knew he was playing catch-up when he arrived for camp, which likely contributed to the discouragement. His teammates noticed and intervened.
“Just helping him try and focus on each and every play and understanding in this league you have to play the next play,” left guard Joel Bitonio said. “If there is a penalty, if there is a sack or if there is something that goes wrong, there is another play that is coming right up and you can’t get down on yourself.
“It is not pretty all the time, but every day he is fighting and getting better. Not every block in the NFL is pretty. You might have to win sloppy sometimes, and he is learning that is OK. When you are at Alabama and you are playing teams, sometimes you just win every block, and that does not happen all the time in NFL. You learn from those mistakes and you keep improving, and you have seen that fight with him.”
Shaw believes Wills has too much passion to fail.
“We all talk about his ability, his God-given talent, which is phenomenal,” Shaw said. “But his excitement about making sure that the team he’s on is being successful. That excitement about just being out there working as a group and accomplishing something, he gets really into that.”

Q and A with defensive end Adrian Clayborn: We talk golf, a 6-sack game, TV, his reason for charity work and a lot more
Baker Mayfield, Browns look to rebound, get much needed win as No. 1 pick Joe Burrow visits in prime time