Q and A with defensive end Adrian Clayborn: We talk golf, a 6-sack game, TV, his reason for charity work and a lot more 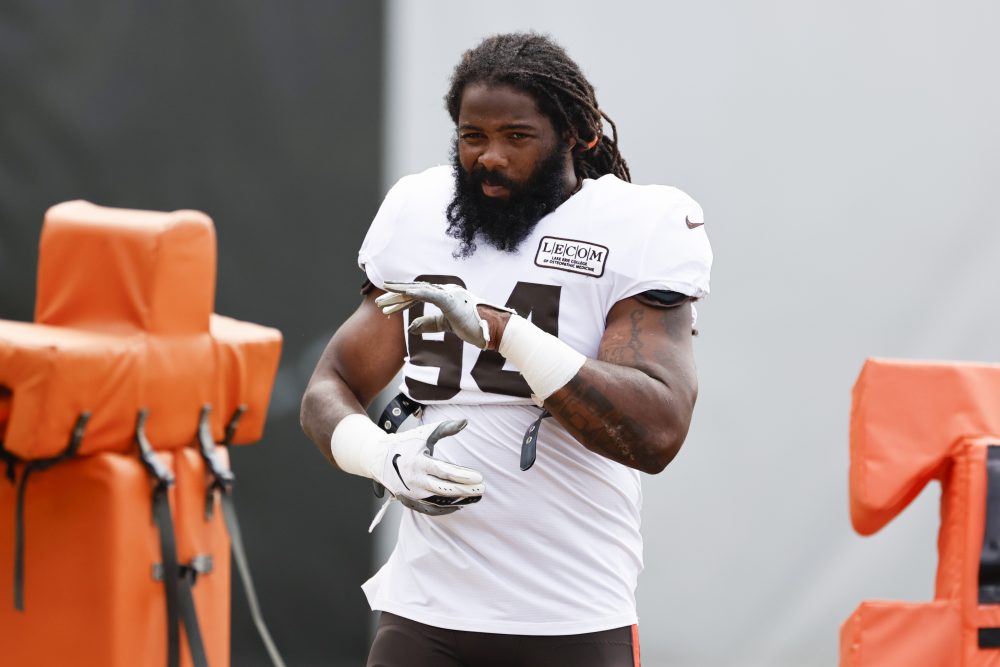 Scott Petrak, The Chronicle-Telegram Browns beat writer, wasn’t able to sit down with defensive end Adrian Clayborn because of COVID-19 restrictions, but they talked by phone for nearly 20 minutes, covering a wide range of topics, including golf, TV and his six-sack game.
Clayborn is in his first season with the Browns after signing a two-year, $5.75 million contract in free agency. He was the No. 20 pick of the Buccaneers in 2011 and has 36.5 career sacks.
The conversation has been edited for space.

SP: You posted a picture of you golfing Monday (Aug. 31), where were you?
AC: I played Grey Hawk (in LaGrange).

SP: How long have you been golfing?
AC: Probably about eight years now.

SP: What got you into golf?
AC: Just getting into the league and a lot of the older guys were playing. Just grew to love the game. It’s a great game. It’s competitive, so it’s something to do in the offseason, and something you can play for a long time.

SP: Have you played a lot of courses around here?
AC: I’ve only played a couple. I’ve only been here for the last month. Try to get out on my off days. I played Sweetbriar (Legacy) a couple times. Played that Grey Hawk, and I think that’s about it.

SP: What kind of scores do you shoot?
AC: I usually shoot low 90s, high 80s if I’m hitting it right. If I’m all over the place, then it can get ugly.

SP: There are a bunch of good courses around here.
AC: That’s what people have told me. I’ve been taking recommendations and trying to write them all down.

SP: Why did you sign with the Browns?
AC: The most important thing to me was finding the right scheme, and this scheme is something I’ve played in for most of my career. So once I found that and then got to talk to the coaches and see how they’re going to play me, it felt like a match from the teams I was potentially looking at.

SP: What role do you see for yourself?
AC: Situational rusher. Rushing inside and outside. And then just backing up the two main guys with OV (Olivier Vernon) and Myles (Garrett). And provide support there.

SP: When you mention scheme fit, I assume that goes beyond just a 4-3 alignment. What is it about coordinator Joe Woods’ scheme that fits you?
AC: It’s just that attack for the defensive line, not much reading. Just attacking and getting upfield and playing the run and then rushing the passer.

SP: Do you take pride in having a leadership role?
AC: Yeah. I embrace it. I mean, I’ve gained quite a knowledge going on my 10th year, so I just try to help out the young guys in the D-line room as much as possible.

SP: Your long beard makes you look wise.
AC: Yeah. You gotta fake it till you make it.

SP: At this stage in your career, do you feel you’ve got a ton left in the tank?
AC: Yeah. My body still feels good. I’d say my body probably feels better now than it did as a rookie. I know how to take care of it now, I know how to eat right and I know what it takes to make it through a full season healthy. So I feel like my body still feels about the same as when I was 24.

SP: Would you prefer a full-time role, or do you like being the third end?
AC: Everybody wants to be a starter, but that’s not where my career is right now. If one of the guys went down, then I prepare for that role. But right now I’m just playing the role that I have, and then if something changes, I’ll take advantage of it.

SP: You had six sacks in a 2017 game against the Cowboys. How does that happen? What does it feel like to be in the middle of that kind of performance?
AC: Going against a backup (Chaz Green). At that time I was the starter. And then just the offensive scheme. They didn’t really give that much support. They didn’t give him any chips, they didn’t give him any help from the guard, and I just took advantage of it.

SP: Did you feel bad for that tackle at all?
AC: No, not really. It’s the NFL. Made me some money off of it.

SP: What stands out about Garrett?
AC: Just athletic ability, man. He can put his body in certain positions that I couldn’t even do when I was 18. He knows how to rush and he knows how to use his body to the max, which is impressive. Him and OV, it’s been pretty cool to see.

SP: How good can Garrett be? I think he’d tell you he hasn’t quite gotten to where he thinks he can be. He thinks he can be an MVP-type player.
AC: I think he can get there. It’s going to take more knowledge of the game, you get that just by playing in the league. More years in the game, learning more ways to rush and learning what offensive tackles like to do to you. I think he’s well on his way there.

SP: How did you get involved in the charitable organization A Better Chicago?
AC: I’m going to always do charitable things, but I live in Chicago now. And I was just looking for an organization to try to help out with this pandemic that was going on. And inner cities get hurt the most and hit the most. And Chicago is really bad right now, so I was just trying to help out. And me and my agent found the organization, they do a great job for what they do. So it was the right fit.

SP: A Better Chicago focuses on kids, homeless and dads coming off drug addictions. Why are those groups important to you?
AC: Well, I believe kids, obviously they’re the future, but to me, they’re innocent. Some positions they’re put in they don’t deserve and if I can change their outlook and hopefully change their future.
Homeless because I have a soft spot for them. Most of the homeless are dealing with mental disease and they don’t want to be in that position but somehow they got in that position, so just trying to help them out of that.
And then fathers with drug addiction, my father was on that path before he passed away. And I just want to help fathers get out of situations, as well.

SP: It must be a really good feeling that you’re helping so many people?
AC: That’s what we’re put on this Earth for. If you’ve been blessed, you’re supposed to bless other people. So that’s what I try to do and hopefully I can do as much as I can.

SP: The Browns organization had social justice meetings recently and came up with an action plan. What did it mean to you to be part of that discussion?
AC: We just wanted to come up with main demands, we wanted to come up with a strategy for how we can help in this situation. Not just put out a blanket statement, or just words. I think we’ve got something good going on, something we can do while we’re in season and the future. So hopefully we’re trying to create change in this crazy world we’re living in right now.

SP: You have a son, Jalen, who’s almost 11 months old. How’s being a dad for the first time?
AC: It’s been fun so far. I’m really enjoying being a dad.

SP: I know you watched a bunch of TV shows during the shutdown, do you have a new show that’s gotten your attention?
AC: No. I’m looking for something. I’ve really been in a rut, I think I’ve watched all of Netflix.

SP: Ever watch “Ray Donovan”?
AC: Oh, yeah. I watched all of that. That was a good show.

SP: Besides golf and TV, do you do anything else for fun?
AC: No. That’s about it. Just trying to get on the course as much as I can. Kinda was obsessed.

SP: What’s the best part of your golf game?
AC: Probably short game. I like putting. I like having touch around the green. My irons are coming along a lot better than they were. And driver, pick a day and it’s different.

SP: You played with former Browns linebacker Christian Kirksey at the University of Iowa. Did he give you any Cleveland recommendations or advice?
AC: I’ve asked him a couple things. He hooked me up with a massage therapist and all that. So I’ve been asking him for things I need and he’s been helping me out.

SP: What did you think about the offseason controversy regarding Iowa and strength coach Chris Doyle, who was ousted after allegations of mistreatment of Black players?
AC: I don’t know. I mean, I never had the experience that some of those guys have, but I definitely have seen it. I think that what came out of it needed to happen, sometimes you need a reality check to know that you can’t really talk to people the way you talk to people. So I think moving forward hopefully they correct it, and hopefully Coach (Kirk) Ferentz can right some of the wrongs with some of the guys and hopefully it moves forward.

After months of uncertainty, start of season brings relief and excitement
Plenty of (Jedrick) Wills to succeed as rookie makes switch to left tackle