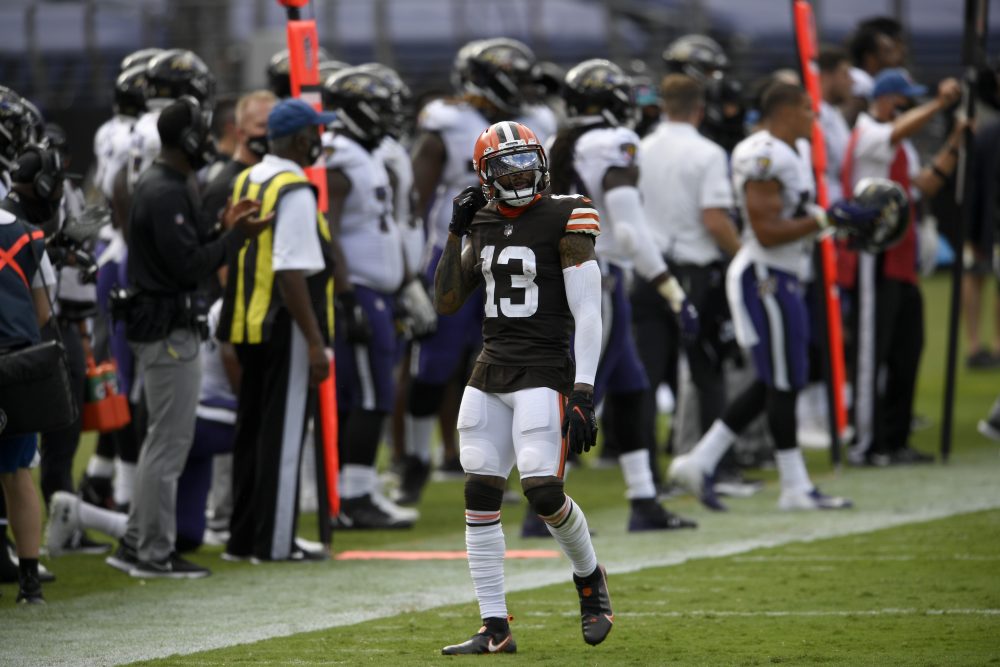 The problem wasn’t coach Kevin Stefanski and quarterback Baker Mayfield trying to get the ball to Odell Beckham Jr. on Sunday in the 38-6 debacle in Baltimore.

The problem was too many of the attempts were unsuccessful.

After another optimism-crushing opener, Beckham became a popular target of criticism … again. The argument goes something like: He’s a diva who demands the ball, becomes disruptive when he doesn’t get it and, therefore, his coach and quarterback go too far to appease him.

While there are elements of truth there — and Beckham deserves to be ripped for a game-altering drop on third-and-2 with 46 seconds left in the second quarter — it doesn’t mean Beckham should languish on the backside of the offense.

“He is a good football player, so I do not think it is newsworthy that he is a focal point of our offense,” Stefanski said Monday.

Because Beckham’s first season with the Browns didn’t live up to expectations — for him and the team — the temptation is to question everything. Including an effort to get him involved.

Stefanski wasn’t part of the dysfunction last season, when Beckham played through a core muscle injury, never developed a connection with Mayfield, didn’t agree with how he was used by coach and play caller Freddie Kitchens, reportedly asked other teams to “come get” him and finished with 74 catches for 1,035 yards and four touchdowns.

“He is a good football player so we want him to touch the ball. I think that is good for us,” he said. “We are mindful of all of our players in terms of how they are touching it.”

Beckham brought such a huge persona with him from the Giants he’s never far from anyone’s thoughts. So when he doesn’t have a catch in the first quarter, everyone notices. And when Mayfield does look in his direction, just as much conversation follows.

Beckham finished the opener with three catches for 22 yards. He was officially targeted 10 times. While a .300 batting average works in baseball, it doesn’t cut it for a receiver.

Beckham didn’t come up with a low pass over the middle that looked catchable, stepped out of bounds for no reason to nullify a catch and was penalized 15 yards for pulling the face mask of cornerback Marcus Peters after he caught a bubble screen — his first touch almost 20 minutes into the game.

This isn’t to argue he had a strong game. Or even that he helped the team in its upset attempt.

The point is fans shouldn’t freak out when Mayfield focuses his attention on No. 13. Those in favor call it “feeding” Beckham. Those frustrated term it “forcing it.”

The Browns have other big-time playmakers in running backs Nick Chubb and Kareem Hunt and receiver Jarvis Landry, so Stefanski and Mayfield can’t be obsessed with Beckham. And there will be opponents who prioritize taking Beckham out of the game plan, so restraint is necessary.

But featuring him is the smart thing to do, and Mayfield’s string of throws to Beckham in the third quarter weren’t extreme. The Browns didn’t trade for him to use him as a decoy. They aren’t paying him $14 million this season to be a secondary element of the offense. The former rookie of the year and three-time Pro Bowler still has All-Pro talent.

Beckham had two catches for 17 yards in first half, and it looked like someone in a position of importance checked the stat sheet in the locker room. On Cleveland’s first drive of the third quarter, Mayfield threw to Beckham six times.

“It really was not (a concerted effort),” Stefanski said. “It is just kind of where the reads took him. I do not think he was forcing the ball.

“We did not connect obviously as much as we would like to. I think it is a combination of things. A couple balls, I am sure Baker wants back. A couple of routes, I am sure Odell wants back.”

The lack of meaningful connections between Mayfield and Beckham is concerning after they couldn’t get on the same page last season, but Stefanski said they “definitely” can get in sync quickly. As a play caller, Stefanski said he already feels good taking advantage of what Beckham does best.

“We have a pretty good feel for Odell and his skill set,” Stefanski said. “He is a talented football player. It is our job to put him in a position to make plays.

“Are we going to learn about him, what he is comfortable with and what we are comfortable with throughout the season? Yes, so that will grow, but I think we have a pretty good sense of it right now.”

Stefanski knows a good thing when he’s got one.

And that it would be counterproductive not to use him as much as possible.