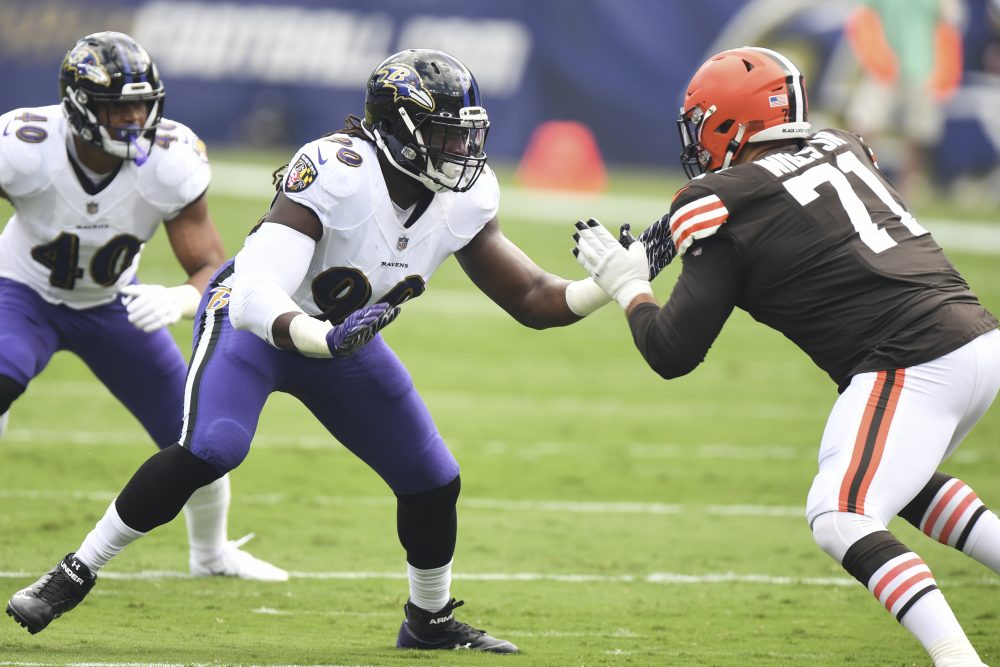 Rookie left tackle Jedrick Wills left the 38-6 opening loss to the Ravens on Sunday with a leg injury but has a chance to be back in the lineup Thursday night against the Bengals at FirstEnergy Stadium.

“He’s sore,” Stefanski said of Wills, the No. 10 pick out of the University of Alabama.

Stefanski said it was too early to tell if he’ll be able to face the Bengals.

The Browns and Bengals were required to put out an injury report later Monday, with the teams estimating what the participation would’ve been if they’d practiced. Wills was listed as limited.

Wills was a right tackle in high school and college. Without a preseason, Sunday was his first game action at left tackle.

He was penalized for holding but otherwise received a passing grade.

“I felt like Jedrick was good,” Stefanski said. “Can always be better. There’s some things we want to clean up with him technique-wise. But I would say it was a solid first outing.”

Tight end David Njoku was placed on injured reserve after leaving the game Sunday with a knee injury. He’s expected to return after missing the required three games.

“Lil pit stop. Back in a couple weeks,” he posted on Instagram.

ESPN reported he has a sprained medial collateral ligament.

Due to roster uncertainty given the coronavirus pandemic, the NFL is allowing players on IR to return this season after missing as few as three games. And there’s no limit to the number of players who can return from IR.

In the past, only two players could come back in a season and they had to miss at least eight games.

** Stefanski didn’t provide an update on rookie linebacker Jacob Phillips, a third-round pick, but Phillips is expected to miss time after leaving the game with a knee injury. His right leg was immobilized following the game and he was listed as DNP.

** Cornerbacks Greedy Williams (shoulder) and Kevin Johnson (lacerated liver) and linebacker Mack Wilson were also listed as DNP. They were inactive vs. the Ravens and haven’t practiced in weeks.

** Defensive end Olivier Vernon (abdomen) was added to the injury list and listed as limited.

** Offensive lineman Chris Hubbard (ankle) was upgraded to limited after missing more than two weeks of practice. He could be needed with the injuries to Wills and Conklin. Kendall Lamm replaced Wills on Sunday.

Defensive end Myles Garrett’s first game back after ending last season with a suspension was a dud. His statline: a tackle for loss, a quarterback hit and a fumble recovery.

Stefanski didn’t think the Ravens did anything special to neutralize Garrett.

“Every team we play is going to be very mindful of Myles Garrett so they will have a plan for him,” Stefanski said. “We expect big things from him. I think Myles expects big things from himself. The good news is we have a game on Thursday.”

As startling as the loss may have been, the Browns had no choice but to quickly switch gears to the Bengals.

“We talked about that yesterday,” Stefanski said. “We have a game here on Thursday, so they flushed it.”

He named turnover margin and penalties as the two biggest areas to improve. The Browns had three turnovers and eight penalties.

“I think that we have a good staff and we have the right players in,” cornerback Denzel Ward said. “We are going to go in and do what we have to do to get the job done next time.”

Safety Ronnie Harrison, acquired in a trade Sept. 3, is expected to take on a larger role as he gets comfortable. The defense could use him as soon as possible after veteran Andrew Sendejo had a rough opener.

“Ronnie is somebody that we are finding out more about and seeing what he can take on,” Stefanski said.

The Browns averaged 5.1 yards a carry and Baker Mayfield was sacked twice.

** Stefanski said the buck stops with him for the failed fake punt in the first quarter.

“Any play like that, I am fully responsible for,” he said. “We were trying to maximize possessions in that game. When there are times that it calls to be aggressive, we are going to be aggressive.”