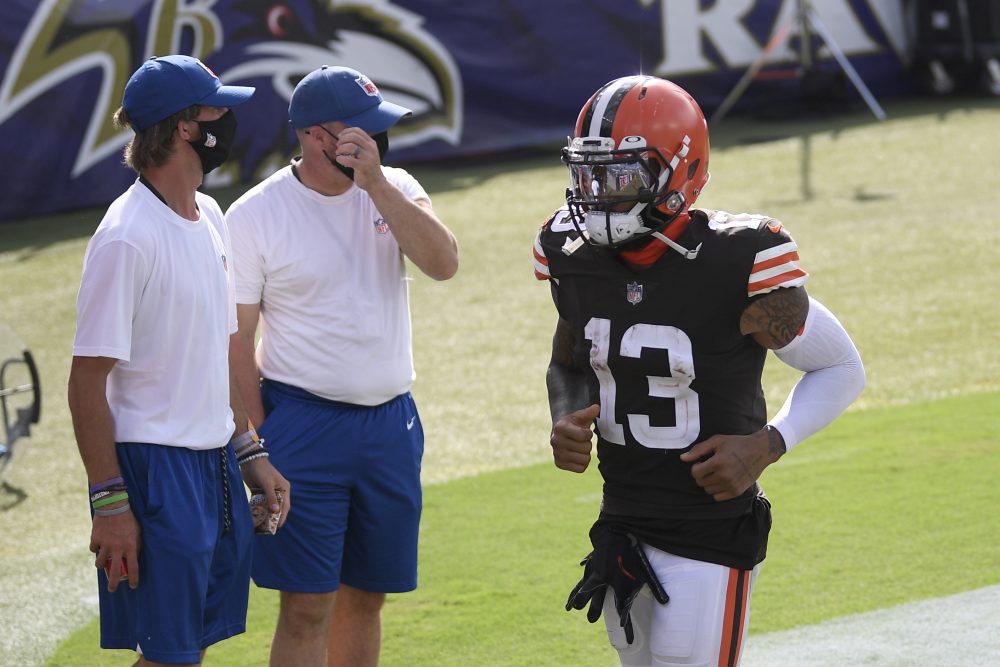 BEREA — Odell Beckham Jr. believes he’s been misrepresented and misunderstood during his six-plus years in the NFL.

In an honest moment, he would likely say he’s been misused in 17 games with the Browns.

Others would say he’s mismatched with quarterback Baker Mayfield.

Beckham just wants his critics to stop making the same mistake and realize something about him.

“I’m just here at a point in my life where I just want to play football, I just want to win. Period,” he said Tuesday on a Zoom call before practice. “There’s nothing else that can distract and deter me from those goals and I think once I get you all, the world, everyone to understand that I care about one thing, and that’s winning and producing, I think that you’ll be able to see some of the other actions and look at it from a different perspective than a perspective of a lot of the names and attachments that have been thrown on me in a way.”

Producing is a significant part of the equation. The three-time Pro Bowl receiver believes his team is better served when he’s a primary piece of the offense.

An argument can be made on both sides whether that was the case Sunday in the 38-6 opening loss to the Ravens.

Beckham was targeted 10 times but had only three catches for 22 yards, the second-lowest yardage total of his career. He waited nearly 20 minutes before seeing the ball on a bubble screen and said he “absolutely” prefers to get involved early and find a rhythm.

“It’s like a shooter (in basketball) putting up a couple threes early and you hit one, two of them, you’re like, ‘God knows, you might drop 60,’” he said. “I would love to get involved early, but it just didn’t go that way Sunday.”

He said he’s not entirely comfortable bringing that up with new coach Kevin Stefanski.

“It’s a tough position to be in with the way that I feel like I’ve been misrepresented to the world,” Beckham said. “It makes it just seem as if I just want the ball, when really I just want to help. I just want to be able to help this team in any way I can.

“You get a sense of just playing your role and you have to trust that the coaches are going to put you in the right position.”

Beckham had a pivotal drop on a third-and-2, stepped out of bounds to nullify a reception and was penalized 15 yards for pulling a face mask while trying to stiff-arm the defender. He also drew two penalties on the Ravens that brought first downs.

The chemistry problems with Mayfield from a year ago clearly weren’t solved in the truncated training camp. Beckham continues to say game reps are the cure, so they’ll get another chance to click Thursday night when the Bengals visit FirstEnergy Stadium as the Browns look to avoid going 0-2.

“Obviously it didn’t go the way we wanted,” Beckham said. “Kinda just toss it up as a mulligan, you’ve got 15 other games, 15 other opportunities and just keep it moving.”

He needed time to reach that state of Zen. He said the Ravens beat the sh– out of the Browns and he processed the lopsided loss like every defeat — with difficulty.

“Go to sleep at 5 in the morning, up just thinking,” he said. “When you want to be at a certain level of greatness, anything less or short of that is never going to be acceptable to you.

“I can sit here like it didn’t bother me, and not stats, I just mean as far as the way that the game went, but I’d be lying. I would definitely like for the game to have went a different way.”

New York radio host Mike Francesa tweeted he heard the Browns are looking to trade Beckham. The rumors started last year and carried through the offseason, and the Browns have been consistent in refuting them.

They’re trying to make it work with a former No. 1 pick at quarterback, one of the league’s most electrifying receivers and a first-time coach.

“It takes all three of us just being on the same page,” Mayfield said. “We had some great one-on-one opportunities on some of those passes from Sunday but just did not connect. Some were just a little bit of miscommunication or a little overthrow. We are working on that so we will get it fixed.”

Mayfield targeted Beckham six times on Cleveland’s first possession of the third quarter, and fans and media questioned whether he forced the ball to him.

Mayfield said Beckham was drawing a lot of one-on-one coverage.

“I mean, that is when the alert goes off in your head,” Mayfield said. “You want to get him the ball. But it has to be the right scenario and right situation for us to do that.”

“We give the quarterbacks very black and white reads,” Stefanski said. “It is not every single play that is starts with Odell. There are plenty of plays that start with him, but we make sure that we coach the quarterback on the reads, and the ball goes where the defense dictates based on the read.”

The tension level seems to rise when the ball doesn’t find its way to Beckham as often as he’d like. The cameras and eyes of observers follow him looking for signs of frustration, so he was asked if he needs to monitor his body language.

“That’s just the way my life’s gone. So you have to watch everything you do,” he said. “Everyone’s always watching. If you don’t have the same reaction that somebody may like, a story, a headline or whatever can be written about you.

“That’s always tough, that’s just the position I’m in. I’ve helped put myself in that position by some mistakes and a lot of by what I did on the field, all the good things that I feel like we often forget about. But that’s just kinda helped put me in this position where the spotlight is always going to be on me, right, wrong, indifferent. That’s something you’ve got to deal with, live with.”