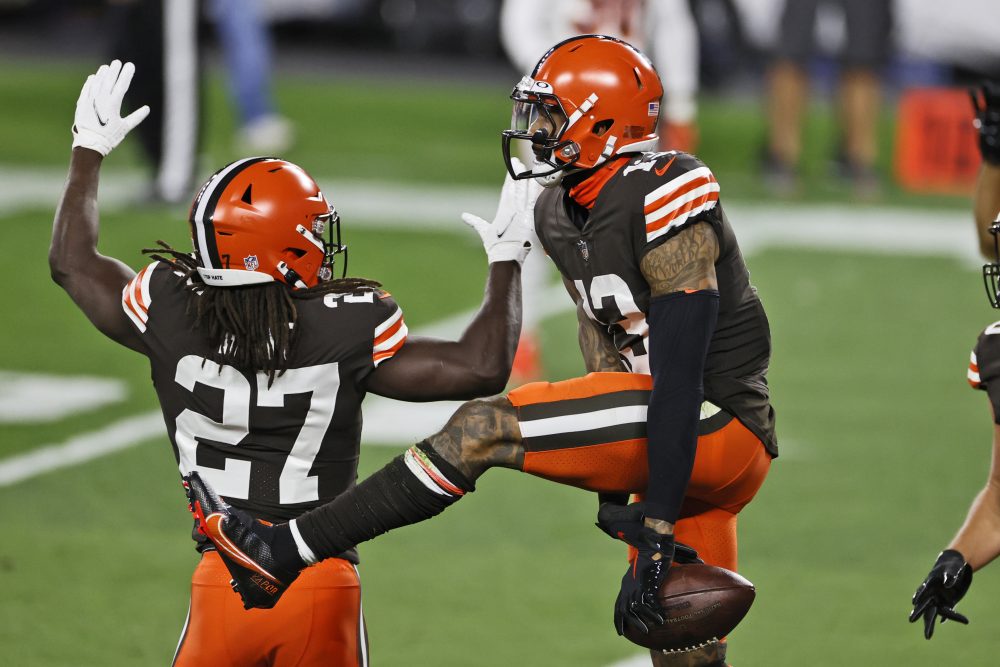 CLEVELAND — Quarterback Baker Mayfield played like he did as a record-setting rookie. “O-B-J” chants filled FirstEnergy Stadium after receiver Odell Beckham’s 43-yard touchdown catch. Nick Chubb wouldn’t be denied on an 11-yard touchdown run, or just about any of his carries.

The Browns offense looked efficient, balanced, explosive and like it’s supposed to with a No. 1 pick at quarterback and playmakers all around him. And the defense got just enough stops as the Browns beat impressive rookie quarterback Joe Burrow and the Bengals 35-30 on Thursday night.

The victory was a nice rebound after a 38-6 loss to the Ravens in the opener Sunday and gave coach Kevin Stefanski his first victory in his first home game. His game plan and play calling were smart and creative.

“It builds an enormous amount of confidence,” Mayfield said. “If we start clicking and keep getting better, this is going to be a fun ride.”

Mayfield’s first matchup with Burrow, a fellow No. 1 pick and Heisman Trophy winner, was worth the price of admission for the 6,000 fans allowed to attend during the coronavirus pandemic. It was also a fun celebration of the 100th anniversary of the founding of the NFL in Canton.

Mayfield and Burrow traded on-target throws and scoring drives all night, perhaps providing a glimpse into the next decade of the Battle of Ohio. Mayfield went 16-for-23 for 219 yards, two touchdowns, an interception and a 110.6 passer rating. Burrow was 37-for-61 for 316 yards, three touchdowns and a 90.6 rating. The 61 throws were second most for a rookie in NFL history, trailing Carolina’s Chris Weinke’s 63 in 2001.

The Bengals refused to go away, and the Browns let them hang around with a Mayfield interception and Porter Gustin face mask in the fourth quarter, but a six-play, 75-yard touchdown drive that featured nothing but runs all but sealed the win with 3:55 left.

Burrow wouldn’t quit and the Bengals scored with 43 seconds left, but the Browns recovered the onside kick.

“The hype is real with Joe,” Mayfield said. “I thought he played extremely well, just being decisive, keeping plays extended, taking care of the ball. He did a great job.

“That team loves him. They follow him and he leads them.”

Chubb started the key fourth-quarter drive with 30 yards on two carries, and Kareem Hunt finished it with four runs for 45 yards, including a 1-yard touchdown.

“It starts upfront. The offensive line played great,” Mayfield said. “Those were some big holes, and those guys weren’t going down by just one single guy. Those guys are real special. That shows what we’re capable of when we get the run game going.”

Baker and OBJ are BACK.

“We were productive tonight,” Stefanski said. “Had a very short week of practice. But we kinda know what our system is, we know what we want it to look like. I was proud of the guys for how they responded.”

A critical sequence occurred in the middle of the third quarter, as the game seemed to turn three times in a matter of moments.

Chubb appeared to score on a 23-yard touchdown run in which he refused to go down, but a replay review spotted the ball at the 1. The Browns had taken the second-half kickoff and methodically marched down the field.

But the Browns failed on three Chubb runs and a third-down incompletion, giving the Bengals the ball inside the 1. The drive lasted 13 plays but couldn’t deliver points.

“We want to be aggressive. Sevens over threes are just a huge deal,” Stefanski said of the decision to go for it on fourth down.

Defensive end Myles Garrett stripped Burrow on third down, and end Joe Jackson recovered at the 1. The Browns were in their three-end rush package, even with Olivier Vernon (abdomen) and Adrian Clayborn (hip) out, and Gustin leveled Burrow just after Garrett had pried the ball loose.

Garrett was playing his first game on the lakefront since he was ejected, and later suspended for the final six games, for hitting Steelers quarterback Mason Rudolph over the head with Rudolph’s helmet. That also occurred in a Browns win on a Thursday night.

“Myles being able to get a rush on them, strip the ball and us get it right there on the goal line, it is a game-changer,” Mayfield said.

After an incompletion, Chubb scored on second down for a 28-13 lead with 5:45 left in the quarter.

The start was exactly what the offense needed. The run and pass worked, and Stefanski went with the misdirection, play-action game that was so successful when he was coordinator with the Vikings.

The “O-B-J” chant broke out in the second quarter after Beckham caught a 43-yard touchdown. After three catches for 22 yards on 10 targets in the opener, Beckham made the big play he’s paid to make.

Notes: During interview on Uninterrupted, Odell Beckham Jr. says he plans to play for as long as he can, is in “best place” in his life

He ran a double move and left cornerback William Jackson III in the dust, and Mayfield faked a handoff to the right, rolled left and put the ball on Beckham.

Stefanski downplayed his first win, but it meant something for his players to deliver it for him and they commemorated it by presenting him with a game ball.

“It was really nice to get him his first win,” Mayfield said. “He works extremely hard.”