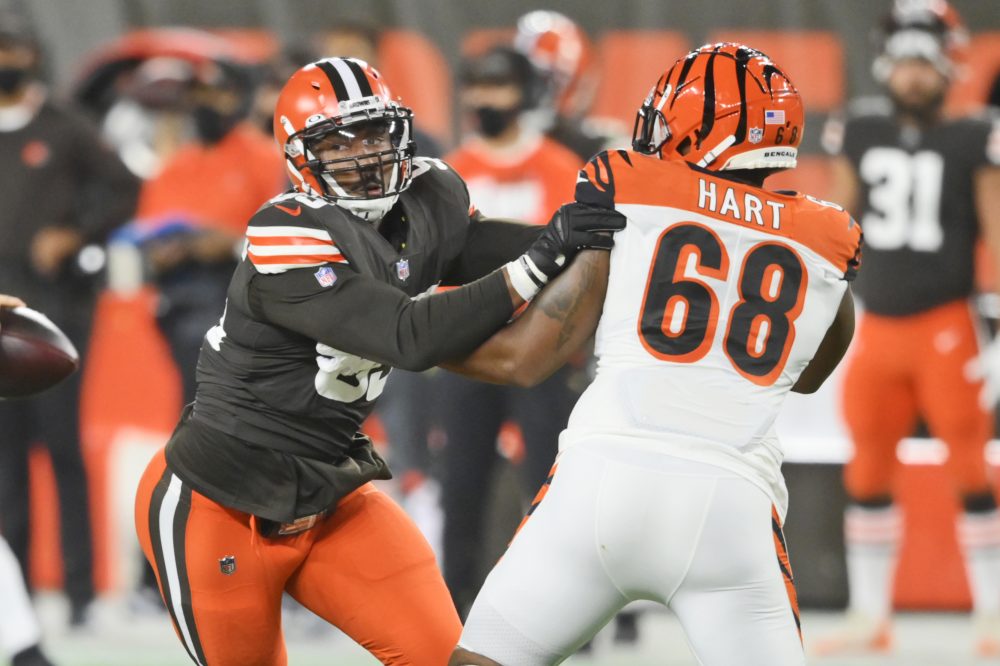 The defense gave up 30 points for the second straight game to open the season, this time to a rookie quarterback. But coach Kevin Stefanski saw a surge in positives from the unit Thursday night in the 35-30 win over the Bengals.

The strip-sack from defensive end Myles Garrett topped the list.

After the Browns offense had been stopped on the goal line on fourth down midway through the third quarter, Garrett got through the line and knocked the ball from No. 1 pick Joe Burrow’s right hand. End Joe Jackson jumped on the ball at the 1-yard line, and Nick Chubb scored two plays later for a 28-13 lead.

“It was a little bit of retribution right there, getting that play done and setting up the offense for a big score, so definitely proud of that,” Garrett said after the game. “Not proud of giving up so many points, but that is something we can look at on film, figure out where our weaknesses are and how to capitalize on some of the balls they threw our way and how we can get better.”

Stefanski pointed out a few other bright spots. The defense was able to pressure Burrow, sacking him three times and hitting him four more, it held running back Joe Mixon to 46 yards and 2.9 a carry and limited seven-time Pro Bowl receiver A.J. Green to three catches for 29 yards on 13 targets.

Despite the good, the Browns allowed 30 points and 316 passing yards, although Burrow needed 37 completions and 61 attempts to get there.

“We just have to make sure we are getting off the field,” Stefanski said Friday after the Bengals went 8-for-18 on third down and 5-for-5 on fourth down. “We will look at that, pull it apart and see what are the ways that we can just get off this field.

“It is hard. There are going to be some attacks and guys are moving the ball, but if we can find a way to get off that field and we find a way to turn the ball over, that will play to our strengths.”

The Browns have forced two turnovers in two games, both fumbles. Garrett recovered one in the opener and forced the crucial one Thursday.

“That is just the kind of characteristics of intelligent, good defensive players. Knowing that we are see ball, get ball,” he said. “A sack is nice, but we are here to take the ball away at the end of the day. Those are the plays you need to make to define your season. Hopefully that is just the start for me.”

Garrett said the team was determined to get back on track after the 38-6 opening loss to the Ravens.

Rookie left tackle Jedrick Wills, the No. 10 pick, played every snap after leaving the opener with a shin injury and held up well. Mayfield wasn’t sacked, and Wills gave up one pressure in 24 pass-blocking opportunities, according to Pro Football Focus.

“Jedrick is somebody that he is grinding himself,” Stefanski said. “He had some really nice plays out there last night, and it is never perfect. I promise you there are things we are going to work on, but he is showing the mentality of what we want this offense to look like and certainly what we want the offensive line to look like.”

“He is playing with a lot more confidence,” Janovich said. “I think OV helped him a lot. Just the terrible pass rushes that he had, it was hard to watch sometimes, but it made him a better player.”

Right tackle Jack Conklin was held out Thursday night because of an ankle injury, so Chris Hubbard stepped in. He had returned to practice Tuesday after missing a couple of weeks with an ankle injury.

“No sacks, the way we rushed the ball, Chris coming off of an injury, I could not be more proud of Chris Hubbard, impressed by Chris Hubbard,” Stefanski said. “He is a good person. He is a good football player. I just think the world of him.

“The decision was we just did not feel like it would be right to put Jack out there. Jack fought his butt off in the last game and was not feeling great with that ankle, and he just grinded.”

The signature play of defensive tackle Sheldon Richardson’s active night was a sack of Burrow, who had rolled right and thought he could evade Richardson. It didn’t happen, and Burrow was thrown to the ground.

“He is 100 percent full-tilt all the time on the field,” Garrett said of Richardson. “He has great effort. You love a guy who is always running to the ball and who is always trying to make a play. That is Shel. Never gives up on a play.”

Richardson finished with six tackles, including the sack and another for a loss.

“He was in the backfield,” Stefanski said. “You get everything that he has on gameday, which I appreciate.”

The mini-bye after a Thursday night game usually allows players to take a quick trip. Not in a pandemic.

Center JC Tretter, who’s the NFL Players Association president, said players are required to get tested for COVID-19 even on their days off.

“We will have to be in here and test every morning still, so I guess there is really no opportunity to travel out,” he said.

Tretter is encouraged by the low number of positives tests around the league, especially after a week of teams traveling to games, but reiterated everyone in the NFL must continue to do the right things.

“It has been extremely positive so far,” he said. “Again, one mistake, one lapse can throw a huge wrench in this entire thing. That is really the focus now is making sure everyone understands that we have done great for two-ish months right now, but we have a long way to go and we have to stay focused and diligent in what we are doing.”

Stefanski didn’t have an update on defensive end Adrian Clayborn, who left the game with a hip injury. He said no one else was injured.

He also said injured players such as cornerbacks Greedy Williams and Kevin Johnson and linebacker Mack Wilson are progressing and will benefit from the extra time before the game against Washington on Sept. 27.

Notes: During interview on Uninterrupted, Odell Beckham Jr. says he plans to play for as long as he can, is in “best place” in his life
Notes: Defensive end Porter Gustin motivated by no margin for error, teams with Myles Garrett for huge play vs. Bengals