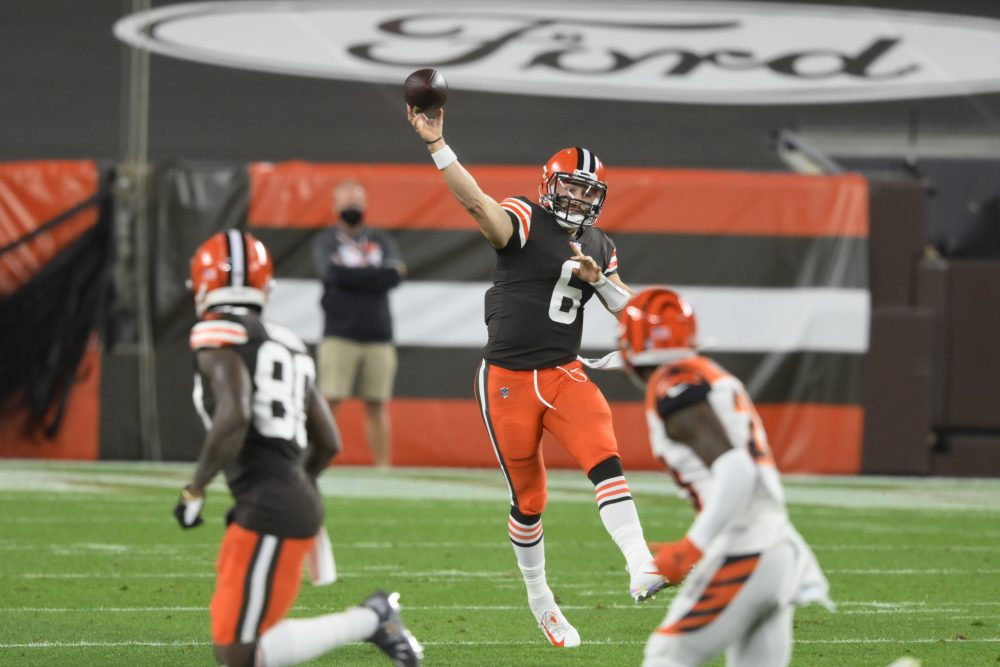 Wins are obviously the most important thing, but two statistics for Baker Mayfield go a long way toward success for him and the Browns.

Accuracy was Mayfield’s calling card at Oklahoma, but too often he lost his aim and touch in the Year 2 regression of 2019. The on-target throws against the Bengals were a welcome return, as they set a tone, kept drives going and paired perfectly with the dominant rushing attack.

Mayfield had completed five passes, including a 43-yard touchdown strike to Odell Beckham Jr., and scrambled 8 yards for a first down before his first incompletion — an intentional grounding when a screen was blown up by the defense. The rest of his incompletions: Beckham was held on a go route but no flag was thrown; a throwaway through the end zone; a bit high on a dump-off to tight end Austin Hooper; wide on an out to Beckham in the end zone; and just wide to Hooper on an out in the end zone.

“Baker did a very nice job — extremely accurate, whether from the pocket or on the move,” coach Kevin Stefanski said Friday. “He made really good decisions with the ball, albeit that one pick at the end, which I know he is not happy about. Really played fast. Led the team. He did a nice job.”

The second key is eliminating turnovers, which remains a work in progress. Mayfield was intercepted in the fourth quarter, making it eight straight games with a pick.

The turnover didn’t wreck his performance, as he helped deliver the victory needed to quiet the doubt after the ominous 38-6 opening loss to the Ravens. It should serve as a valuable lesson.

The Browns led 28-16 to start the fourth quarter and quickly moved into Bengals territory. A touchdown would’ve made it a three-score game, all but ending the suspense.

But Mayfield got greedy. Some would argue Stefanski made the mistake by calling a pass after three straight Kareem Hunt runs of 11, 10 and 6 yards, but if Stefanski wants to be aggressive, he needs to be able to trust Mayfield to make the right decision with the ball.

“I know he wants it back,” Stefanski said after the game. “The bottom line is we have to learn from it and put that in the memory bank.”

Stefanski gave Mayfield targets short and intermediate on second-and-4 from the 26-yard line, but Mayfield went for rookie tight end Harrison Bryant near the goal line. He appeared open, but Mayfield didn’t see cornerback Williams Jackson III, unoccupied by a receiver, dropping to the deep middle from the left side.

Interceptions aren’t always the quarterback’s fault, but this one was on Mayfield. And when Joe Burrow led a 14-play, 83-yard touchdown drive on the ensuing possession, the Bengals trailed only 28-23. Luckily for Mayfield and Stefanski, they could turn to the run game for all six plays on a 75-yard touchdown drive that again provided breathing room.

“We talk a lot about the balance between being aggressive and smart,” Stefanski said. “I want our quarterbacks to be aggressive. I also want them to know the value of the football.”

Mayfield’s clock got sped up on the interception. Defensive end Khalid Kareem didn’t buy the play action and forced Mayfield to stop his rollout and make a quick decision. In that situation and with the run game as good as it is, Mayfield needs to be more careful.

“We spend a ton of time with the quarterback on his decision-making,” Stefanski said. “We will always be making sure that an important part of our teaching moments are taking care of that rock.”

Slinging the rock also matters, and Mayfield found his form against a suspect Bengals defense. Only twice in 16 games last season did he complete a higher percentage of passes, in a win over Miami and a loss at Arizona. He finished the year ranked 31st in the NFL with a 59.4 completion percentage.

But Stefanski brought a scheme that should accentuate Mayfield’s strengths, including throwing on the move and outside of the pocket. After not using the misdirection play-action in the opener, Stefanski started the Bengals game with two such calls for a pair of completions. The touchdown to Beckham also came with Mayfield outside the pocket after faking a handoff to the right and rolling left.

“Baker’s ability to make plays outside the pocket is something that comes to him very naturally and something that is important to our style of play,” Stefanski said. “I thought it was on display.”

Mayfield also threw well from the pocket, including an out to Hooper, an in to receiver Jarvis Landry and an in-rhythm out to receiver KhaDarel Hodge. Such throws are necessary to convert third downs, and the Browns went 5-for-8.

“He made some really heady plays on third down,” Stefanski said.

The strides for Mayfield were obvious. The next step is to stop throwing interceptions.