Mailbag: What can be done at safety? What’s gotten into Wyatt Teller? Where’s Rashard Higgins? 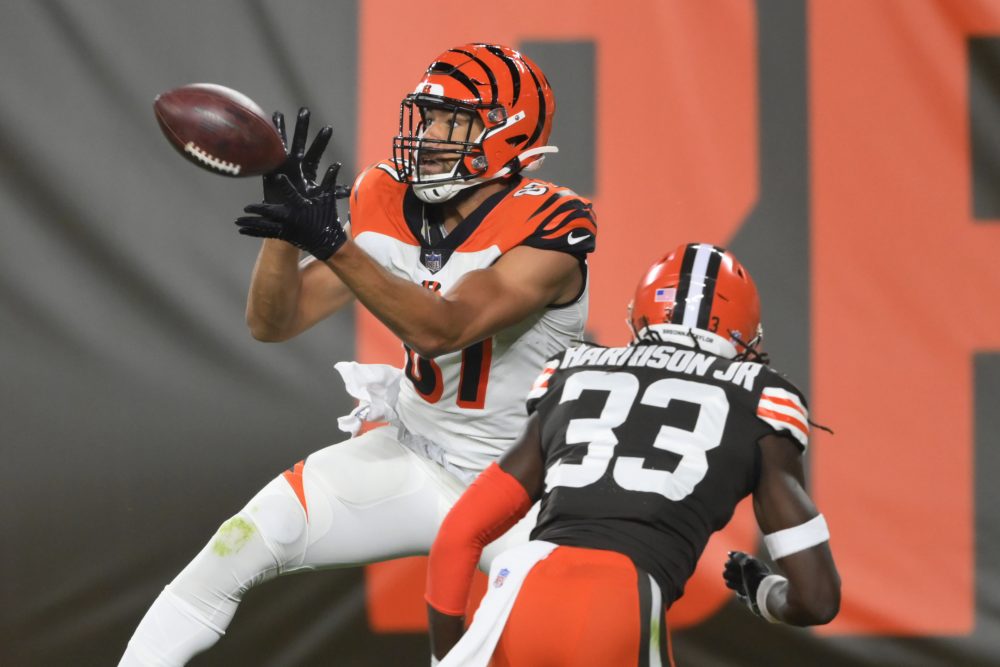 Q: The safety position still seems to be a significant problem for our defense. What direction do you think the Browns will go — stay with the starters and hope they will get better, use some of their cap space on a free agent, or promote a safety from their practice squad?

A: @VertochKyle asked about Ronnie Harrison, so this should take care of both your questions.

The safeties have undoubtedly been a weakness through two games. The first option is Harrison, who was acquired in a trade with the Jaguars after rookie Grant Delpit was lost for the season with a ruptured Achilles tendon. The coaches have been trying to get Harrison up to speed, and I’d hope he’d be ready for a larger role given the extra time before the game Sunday against Washington. Harrison played a series against the Bengals in place of Karl Joseph but didn’t get to the corner in time as tight end C.J. Uzomah caught a 23-yard touchdown pass. I was surprised Harrison filled in for Joseph rather than Andrew Sendejo, who had a terrible opener against the Ravens. But after that choice by the coaches, I’m expecting the Browns to use a three-safety rotation starting Sunday. Who plays would depend on the situation and offense’s personnel package.

The Browns hope Harrison is the upgrade they desperately need. The other option is to sign free agent Eric Reid, whom Colin Kaepernick recently said was being blackballed for his outspoken stance against social injustice. The Browns have embraced the fight for social equality, so they shouldn’t have a problem signing Reid, who started 16 games last year for Carolina, totaling 130 tackles, six passes defensed, four sacks, two fumble recoveries and a forced fumble. I’d go after him if Harrison proves not to be the answer.

Q:
My most pleasant surprise this season has been Wyatt Teller. Solid play would’ve been all any of us Browns fans could hope for at right guard, but Teller has often been flat out dominant. I counted three plays where Teller blocked his man to the ground against the Bengals and I can’t remember a play where his defender wasn’t taken care of. What’s the story there?

A: Former general manager John Dorsey saw something in Teller to trade for him at the end of last preseason, but Teller didn’t do much to win over anyone during his nine starts last year. Expecting a rugged preseason competition, Teller went to work in the offseason, telling Nate Ulrich of the Akron Beacon Journal he gained 16 pounds of lean muscle and lost 3 pounds of fat to weigh in at 315. He also spent time before the season working with center JC Tretter and left guard Joel Bitonio.

Stefanski raved about Teller’s physical play against the Bengals, as the Browns dominated on the ground, rushing for 215 yards. Teller’s supposed to be the weak link on the line. If that’s the case and he continues to play like this, the Browns will own the line of scrimmage.

Q: About Jack Conklin, do we know how long he will be out?? I was pleased to see that Chris Hubbard who replaced Conklin at right tackle against the Bengals was rated by PFF in the top 20 for NFL tackles this year. Please evaluate the right tackle position.

A: Conklin tried to give it a go in pregame Thursday night and looked OK to me, but general manager Andrew Berry and coach Kevin Stefanski determined he wasn’t ready on a short week and had him dress only in case of emergency. So I would expect Conklin to be back either Sunday against Washington or the following week in Dallas.

I’m glad you recognized Hubbard, who lost his starting job when Conklin was signed in free agency. Hubbard missed more than two weeks of practice with an ankle injury, returned last week, got ready in a hurry and helped the line allow no sacks and rush for 215 yards.

Q: Is linebacker Sione Takitaki going to be able to improve his bad tackling?

A: That’s a great question after Thursday night, and I don’t have the answer. Takitaki loves to hit and had five tackles against the Bengals, but the concern is if he can hold up in space. He still needs to prove he’s athletic enough.

Q: Why haven’t we seen Rashard Higgins play yet?

A: You weren’t the only one with this question. To me, the answer is simple: The coaches like KhaDarel Hodge better as the No. 3 receiver. I know Higgins is a fan favorite and people are still upset that coach Freddie Kitchens didn’t use him last year, but I like Hodge getting the snaps as the No. 3.

Hodge has been part of the “heavy” package, serving as the lone receiver with two tight ends and a fullback because he’s a better blocker than Higgins. Hodge has also grown as a receiver and had two catches for 39 yards against the Bengals. I think he has a higher ceiling than Higgins, and it looks like the coaches agree.

A: From watching for years players pack their bags Fridays for games, I think most players recycle their cleats. This, of course, doesn’t include Odell Beckham Jr., who seems to have a special pair for each matchup.

As for gloves, when fans packed the stands, the players routinely gave away their gloves after each game. So it’s safe to say they use a new set of gloves every week. I would guess it’s not universal, as there have to be superstitious players who hang on to the lucky pair.

Q: The only wide receiver in club history to have more than one 1,000-yard receiving campaign as a Brown is Mac Speedie, who was recently selected (but not yet inducted) into the Pro Football Hall of Fame. I think one of those seasons came in the AAFC, however.

A: You also sent a quarterback history lesson, but it was longer and I thought this tidbit was especially relevant with Beckham and Jarvis Landry on the roster. It’s really hard to believe that not a single Browns wideout since 1950 has reached 1,000 yards twice, but it seems a safe bet Beckham, Landry or both will end that drought this year. Both hit a grand last year.

Mailbag: How will Kevin Stefanski’s personality translate to success? Will Mack Wilson be back soon? Will team be significantly better by 2nd half of season?
Mailbag: Which version is the real Browns? Will offense need to score 30 every game? What’s going on with kick coverage?