Notes: Defensive end Porter Gustin motivated by no margin for error, teams with Myles Garrett for huge play vs. Bengals 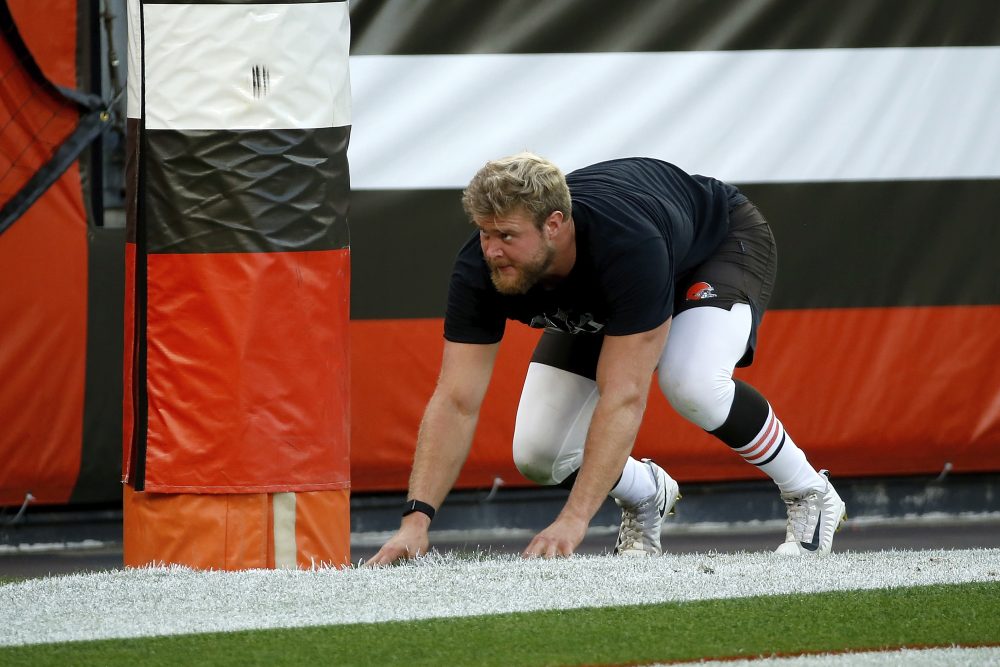 BEREA — Defensive end Porter Gustin didn’t have the chance for the strip-sack because Myles Garrett got to Bengals quarterback Joe Burrow a split-second sooner. But Gustin worked in tandem with Garrett to penetrate the pocket, then arrived in time to lower the boom and take down Burrow after he had lost the ball.

Joe Jackson, the third end on the field, recovered the fumble at the 1-yard line, setting up the offense for an easy and pivotal touchdown Thursday night in the 35-30 victory.

“It definitely brought some satisfaction,” Gustin said Monday after practice. “What it really did is it gave our team the momentum and it gave us energy.”

Gustin lined up at left end with Garrett at left tackle. They ran a stunt, with Garrett heading outside and Gustin inside. They both came free.

“It does not work one without the other,” Gustin said. “Working together on that is what made that happen.

“It was nice to be able to get out there and do it in a game setting and be able to hit the quarterback. I have not been able to do that since last season. (Burrow) did not seem too rattled up, but I like to think it got him thinking a little bit, a little worried.”

Gustin is the fourth end on the depth chart but was bumped to No. 2 Thursday night when Olivier Vernon (abdomen) was inactive and Adrian Clayborn (hip) left the game. Gustin earned the roster spot with a strong training camp, leapfrogging Chad Thomas.

“Going in as a backup, it is definitely a different feel. The preparation is different and you get a lot less reps in practice,” Gustin said. “You can take that two ways. You can kind of see it as I am not going to play and not really prepare like a starter. Or you can see it how I have been seeing it where I know I may only get a few reps during the game, and if that is the case, then I have no room for error because if I go in and mess it up, the coaches are going to be reluctant to put me in again. In that sense, it has kind of changed my perspective, and if anything, probably helped motivate me to prepare more just knowing that I am on a short leash. You have to be prepared and be ready to take on anything.”

Gustin (6-foot-5, 257 pounds) was undrafted out of USC last year and joined the Browns’ practice squad Nov. 4. He was promoted to the active roster Nov. 22, played six games with one sack, then used the offseason to add weight and continue the conversion from outside linebacker.

“With Porter you know you are going to get an honest day’s work,” coach Kevin Stefanski said. “Effort is there from snap to whistle. He is a very diligent worker. He is going to be where he is supposed to be.

“And really throughout training camp he just kept making plays, and it is as simple as that. It is starting to show up a little bit in these games.”

Gustin competed against rookie left tackle Jedrick Wills in camp and has seen significant improvement from the No. 10 pick.

“He has done great, and I think he has come a long way from the beginning of camp until the end,” Gustin said. “He is out there going against a lot of good pass rushers, and sometimes it does not go his way, but that is how it always is, especially for a rookie coming out here. It is tough.

“I think he has gotten better from it, learned from it and been able to step it up and come out and do really well on gameday, so it is great.”

Vernon, Clayborn and rookie linebacker Jacob Phillips (knee) didn’t practice but worked on the side with the athletic training staff.

Phillips and Vernon were hurt in the opener Sept. 13 and didn’t play against the Bengals. Clayborn was hurt Thursday and left the game. He has two sacks in 50 snaps.

The Browns, Cavaliers and Indians will partner with Cleveland VOTES and the Cuyahoga County Board of Elections to host National Voter’s Registration Day at Rocket Mortgage FieldHouse on Tuesday from 10 a.m.-2 p.m. The nonpartisan event will be held in the atrium, and kiosks will be set up to confirm voter registration status, update and/or register to vote and complete an absentee/vote-by-mail application.

** Stefanski said he was mostly a dad over the long weekend but worked from home a bit.

“I did some TV scouting yesterday watching the Washington Football Team versus Arizona,” he said. “I did some scouting from my back porch.”

** Tight end Kyle Markway (6-4, 247) was signed to the practice squad. He was undrafted out of the University of South Carolina in 2019 and spent time on the Giants’ practice squad.

The Browns have an open spot on the 16-man practice squad.