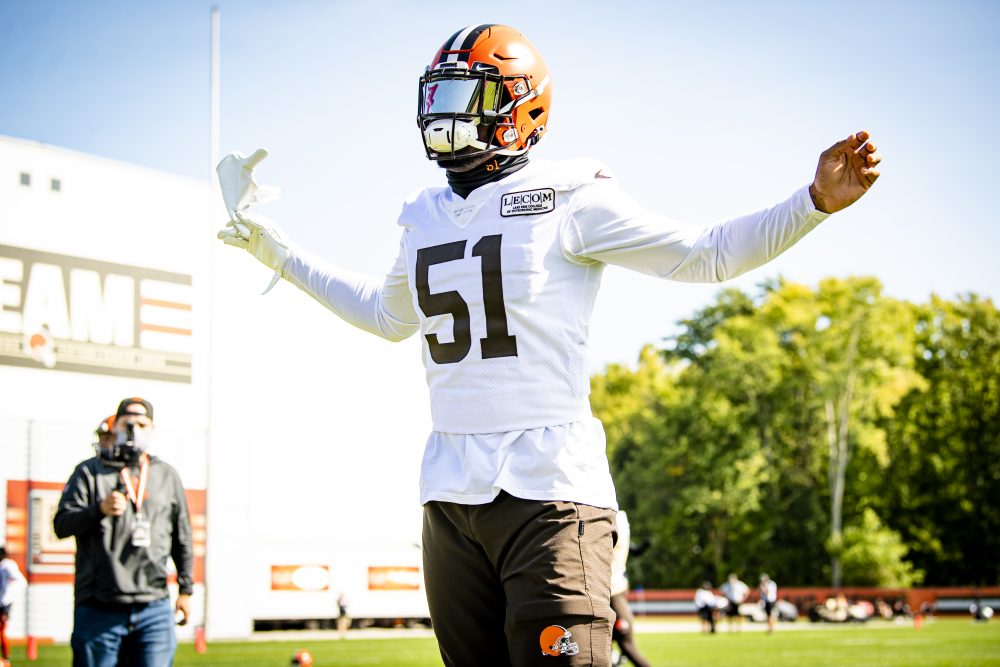 BEREA — Linebacker Mack Wilson thought he was done for the season when his left knee hyperextended Aug. 18. Nickelback Kevin Johnson didn’t have any idea what to expect when he found out his liver had been lacerated in a freak accident during practice Aug. 19. Cornerback Greedy Williams walked off the practice field Aug. 24 and his banged-up shoulder didn’t respond as quickly as he hoped.

The three key defensive pieces returned to practice Monday after the Browns’ long weekend following a 35-30 win over the Bengals on Thursday night.

“Good to get some guys back out there on the grass, moving around,” coach Kevin Stefanski said.

“Just being out there and having the helmet on next to your brothers is always a great feeling,” Williams said.

The positive update for the Browns was in sharp contrast to much of the news across the NFL. Giants running back Saquan Barkley, 49ers defensive end Nick Bosa and Broncos receiver Cortland Sutton were among the long list of high-profile players to suffer major injuries Sunday. The aforementioned trio have torn anterior cruciate ligaments and are out for the season.

“I was heartbroken for them,” Wilson said. “For these guys to be going down and these great guys that are leaders on their team and guys that their organization needs, it is tough.” 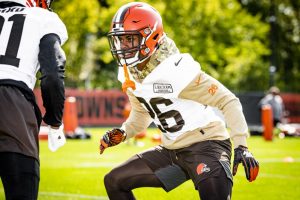 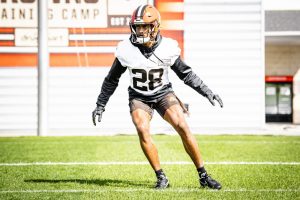 The Browns (1-1) have given up 68 points and 586 passing yards in two games, so they could use the help in the back seven. They’ve been especially vulnerable in the middle, where Johnson in the slot and Wilson at linebacker should help.

“It will be a huge spark to have all three of us back,” Wilson said.

Stefanski wouldn’t say if Wilson, Johnson and Williams would play Sunday against Washington (1-1), but Wilson said he’s ready and Johnson indicated he would be, too.

Williams is coming off his first shoulder injury, which was suffered on a “hard hit,” and said he’d probably have to wear a brace to prevent further damage. Stefanski complimented veteran replacement Terrance Mitchell on his performance vs. the Bengals, so the coaches could have a decision to make whether to return Williams to his starting spot opposite Denzel Ward.

The Browns have sorely missed Wilson, who’s the best coverage linebacker on the roster and had predicted a breakout Year 2 for himself. When he went down a month ago, he didn’t expect to be back this season, let alone in Week 3.

“I was just thinking to myself, ‘Why me?’ I thought I was going to be done for the season with all the pain I was feeling,” he said.

Once the swelling subsided, the timetable was set at six-to-eight weeks.

“I was just telling myself every day, ‘I am a warrior. I am built for this. I know I will be back sooner,’” he said. “It was like maybe the sixth day and the doctor had said he had never seen anything like it as far as my healing process.”

Wilson went down the day after he took down running back Nick Chubb with a neck-high tackle that led to a concussion.

“For me to make a bad decision with tackling Chubb when we should not be tackling, I felt like it was karma, honestly, with me going back the next day and getting hurt,” Wilson said. “I just stayed positive about it and just kept my head held high.

“I made a poor decision by just tackling him anyway. I felt like I was out of control a little bit.”

Johnson, who signed a one-year deal as a free agent, couldn’t have been blamed for wondering what he had done to deserve the lacerated liver, which happened when he got tangled with rookie tight end Harrison Bryant trying to break up a pass. Johnson’s career has been marked by injuries, but this was a new one, referring to it as “random.”

“I just thought that I got the wind knocked out of me really, really bad, but then it felt a little bit different than that,” he said, adding he couldn’t breathe normally for a long time. “I was really upset when I heard the news, just because it sounded kind of bad.

“I was not necessarily scared. I more so wanted to play. I was p—– off more than anything. As the time went on, I was realizing that it was not too bad and I was healing pretty quick. I feel blessed that I am able to be back out there and practice.”

The doctors told Johnson once the liver heals, it’s healed. He won’t have to wear extra padding or worry about it happening again.

“I feel like I did right before I injured it,” he said.

That could be a huge boost for the secondary, as Tavierre Thomas struggled filling in in the slot. Johnson was the No. 16 pick in 2015 by the Texans, has started 19 games and had a strong camp before the injury.

“He is a savvy player, and he is not very old but he has some reps, you know he has some pelts on the wall,” Stefanski said. “He was able to make some plays and we will be excited when we do get him back out there.”

“Getting injured is just one of the most depressing things ever because you are not out there with the team, you are not traveling with the team, you are always in the training room and you are rehabbing,” Williams said. “It is a bad feeling to get injured and you can’t do certain things that you love. I put in all that hard work and now I have to sit back and miss two games. There is a lot of stuff that goes through your mind when you are injured.

“That is why I am happy to be back out on the field. I feel like I am free. I feel like I am able to do what I love, and that will just give me an opportunity to get back out there and run with my teammates. It is an amazing feeling.”