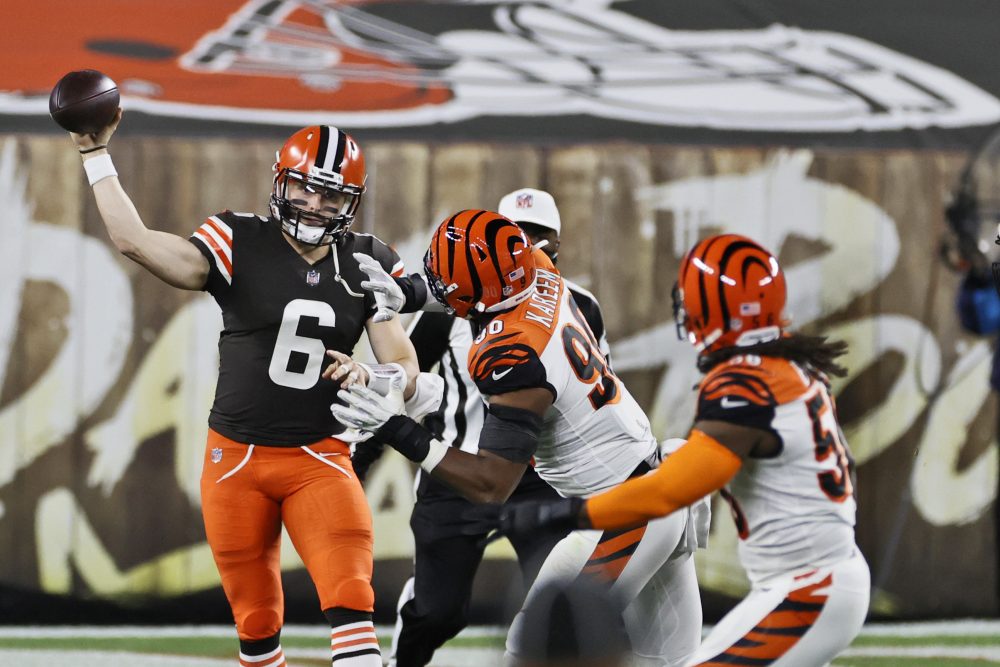 BEREA — Baker Mayfield’s confidence took a hit last season — in part because he kept getting hit.

With a renewed belief in the offensive line, Mayfield has regained some of his signature swagger.

“I feel really great,” Mayfield said Wednesday regarding his protection. “We had no sacks and over 200 yards rushing. They played extremely well.

“We are going to lean on those guys and trust them to do that week in and week out.”


Mayfield wasn’t hit in the 35-30 win Thursday night over the Bengals, according to the official gamebook, after the Ravens sacked him twice and hit him four more times in the opener. The challenge gets much stiffer this week, with Washington and its league-leading 11 sacks visiting FirstEnergy Stadium on Sunday.

Instead of spending the week worrying and planning escape routes from the pocket, Mayfield has faith in the reconstructed line. Free agent pickup Jack Conklin will be back at right tackle after missing the Bengals game with an ankle injury, rookie left tackle Jedrick Wills is getting comfortable and right guard Wyatt Teller looks like a different player after an offseason spent transforming his body. Left guard Joel Bitonio was already a Pro Bowler, and center JC Tretter is solid, tough and reliable.

“They are really good upfront,” Mayfield said of Washington’s defensive line that has five first-round picks. “That is the challenge for us. The game starts upfront.

“We have to bring the intensity. We have to find completions, get the ball out, establish the run game and not let them be the game wreckers.”

Mayfield has acknowledged this is a huge year for him. He’s eligible for a contract extension after the season and must prove he’s a better player than he showed last year, when he ranked 31st in the league in completion percentage, interceptions and passer rating.

The pressure was already cranked up for the Week 2 prime-time matchup with the Bengals, and a perfect start helped Mayfield quickly move past a disappointing performance in the 38-6 loss to the Ravens.

Mayfield opened Thursday night with back-to-back completions of 9 and 26 yards on rollouts off misdirection play-action. He added a 43-yard touchdown to Odell Beckham Jr. on a similar design and was 5-for-5 for 98 yards before an intentional grounding when a screen play didn’t work.

“Have to come out firing and executing early on,” Mayfield said. “You have those first 15 plays that you want to come out and get going, and we need to do that again.”

Mayfield also played well from the pocket against the Bengals, finishing 16-for-23 for 219 yards, two touchdowns, an interception and a 110.6 rating. But the early success with the movement off play-action is what the Browns envisioned when Stefanski brought the scheme he learned from longtime coach Gary Kubiak.

“Yes, definitely, especially with the threats we have,” Conklin said. “We need to get the quarterback out in space and when we get the defense to worry about the run, it is just going to give him a lot more time and getting him in a position where he is not worrying about just having to sit back in the pocket.

“That is tough for any quarterback just to sit back there and worrying about the offensive line holding up. When you change it up on the defense and make them think we are going to be out of the pocket, so then in the situations where you do have to sit back, they are a little bit slower and it is not going to be a collapsed pocket as quickly. You can really see him starting to grasp the offense on Thursday night. I am excited to see what he can do the rest of the year with it.”

Conklin said he can feel Mayfield’s confidence on the field, but Mayfield continues to be understated in his dealings with the media. He’s deflected questions about himself and shared the credit.

“I am very comfortable doing it,” he said of rolling out. “It does not just help me, though. It helps the O-line move in the pocket where we are not just dropping back and letting teams tee off on us and having them having to react. It helps our run game out. It makes us more versatile, and teams have to prepare more for that.”

The touchdown to Beckham will give opposing defenses something else to worry about. Mayfield and Beckham haven’t consistently been on the same page since Beckham arrived last season, but his nifty double move and Mayfield’s perfect throw could give them momentum.

“We had a few more completions last Thursday, so just continue to build that, get the ball in his hands and let him make plays,” Mayfield said of Beckham, who led the team with four catches for 74 yards on six targets

He spread the ball around against the Bengals — eight players had catches — after targeting Beckham 10 times for three completions and 22 yards in the opener. With playmakers across the skill positions, Mayfield said the message from Stefanski and coordinator Alex Van Pelt is to trust the play calls to keep everyone happy.

“The quarterback, it is such a hard position to play in and of itself,” Stefanski said. “You just have to stick to your reads and trust what you are seeing and the ball goes where the defense dictates it goes oftentimes. It is our job as coaches to design an offense where we make sure our guys are touching the ball. We are very mindful of it as we put a plan together. We are mindful of it on gameday. The quarterback has enough to worry about other than making sure he is getting X player X touches. That is just more a function of our offense.”

Mayfield’s only big mistake Thursday came when he forced a pass, but it wasn’t intended for Beckham. He was pressured as he rolled and thought rookie tight end Harrison Bryant was open deep down the middle in the fourth quarter. The throw was intercepted at the 2-yard line.

“No negative plays when you have someone in your face like that,” Mayfield said. “I see Harrison win on (safety) Jessie Bates on the corner post, but because I stepped up and had to stop and did not have my eyes on the backside corner, that is where the interception happened. When it comes to that stuff and I can’t see the whole field or the perfect look that we need for it, just check it down or find an incompletion.”

Baker Mayfield, Browns look to rebound, get much needed win as No. 1 pick Joe Burrow visits in prime time
Odell Beckham Jr. finds “acceptance,” understands he’ll have to learn where he fits in offense led by running game