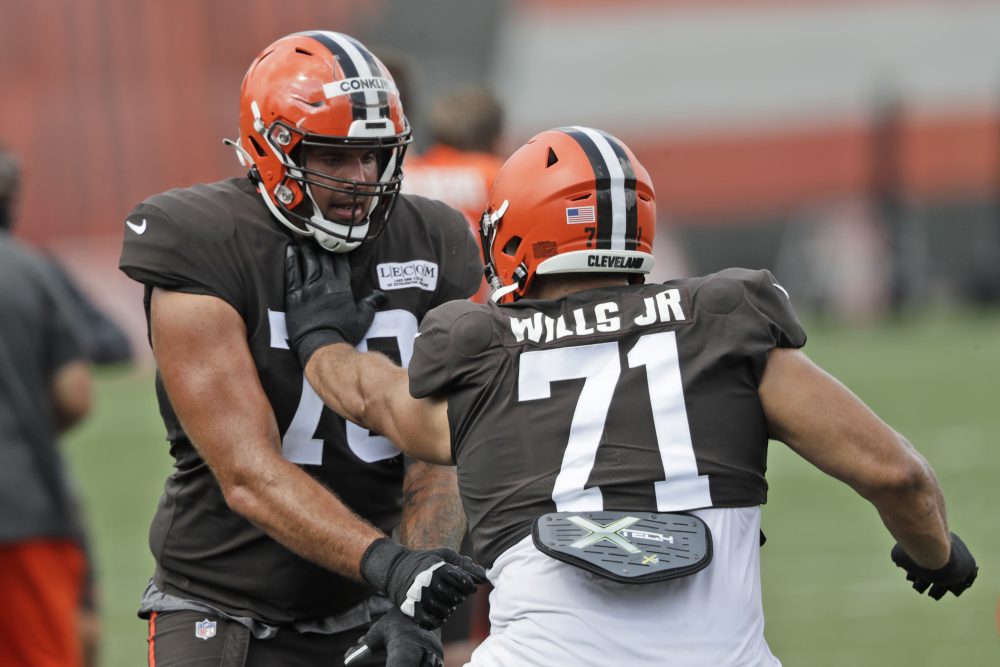 BEREA — Right tackle Jack Conklin didn’t want to sit out the 35-30 win over the Bengals. There’s no way he’s missing two games in a row.

“The ankle’s feeling great,” he said Wednesday on a Zoom call. “I’ll be back to 100 percent this week, rolling. Obviously it’s a tough situation on a short week, trying to come back after getting beat up and it came down to the wire.

“It’s tough, you want to be out there and play. That’s why I’m here and hopefully we don’t have this situation again.”

Conklin limped through the fourth quarter of the 38-6 opening loss to the Ravens on Sept. 13. He tested the ankle before the game last Thursday night, but coach Kevin Stefanski decided to start Chris Hubbard. Conklin was active in case of emergency but didn’t play.


The Browns face Washington on Sunday at FirstEnergy Stadium, and the extra time has helped.

“Definitely. Having those 10 days are fantastic for my ankle,” Conklin said. “I’m feeling great.”

Washington’s front four of ends Chase Young and Montez Sweat and tackles Jonathan Allen and Daron Payne were all first-round picks, including Young going No. 2 in April out of Ohio State. Young has 2.5 sacks, and Washington leads the NFL with 11.

“Obviously they’re a great front and they’re playing really well,” said Conklin, who signed a three-year, $42 million contract as a free agent in March. “They’ve got some young guys up there that are doing a great job and really coming together and working as a group.

“It’ll be a great challenge for us this week to keep everybody clean. It’s going to be a fun week. We’re excited to get out there and show what we can do.”

Conklin was limited in practice Wednesday, but Stefanski believes him when he says he’s back.

“Jack is a trustworthy guy,” he said. “You take what he says definitely to heart.

** Cornerbacks Greedy Williams (shoulder) and Kevin Johnson (lacerated liver) and linebacker Mack Wilson (knee) were limited as they try to return after missing the first two games. Stefanski said a decision will be made on all of the aforementioned players’ availability for Sunday later in the week.

** For Washington, defensive end Ryan Kerrigan (toe) and receiver Steve Sims Jr. (toe) were among those who didn’t practice.

The Browns don’t just consider the 215 rushing yards against the Bengals something to celebrate. They expect to replicate the performance every game with running backs Nick Chubb and Kareem Hunt.

“It is a big goal but it is something that we can do,” Conklin said. “When you have two backs like that, you never are going to have somebody who is tired. You can just bring in the next guy, and he is not going to be a drop-off at all.”

Washington coach Ron Rivera said the duo reminds him of when he had DeAngelo Williams and Jonathan Stewart with the Panthers.

“First of all, I like their offensive line,” Rivera said on a conference call. “They are a very well-coached group. That tandem of Hunt and Chubb is dynamic. They are versatile backs. They run inside and they run outside.”

“Wyatt has been great for us,” Chubb said. “I know (line) Coach (Bill) Callahan is on his tail every day at practice to get him going and not letting him slow down or stop or anything. He has been a great part of this team.”

Teller entered training camp as the one lineman not assured of a starting spot but easily secured the job.

“To Wyatt’s credit, he works very hard in the weight room and on the practice field,” Stefanski said. “He works at his craft. He is always getting extra, so I think that shows up.”

Safety Ronnie Harrison played six snaps against the Bengals, and Stefanski expects the number to jump. Harrison was acquired in a trade with Jacksonville on Sept. 3 after rookie second-round pick Grant Delpit was lost for the season with a ruptured Achilles tendon.

“Ronnie just showing up on campus a few weeks ago, we are definitely learning more about him as he learns more about us and our system,” Stefanski said. “We are looking to put him in places where he can help us, and I think his role will continue to grow.”

Stefanski expressed his condolences following the death of Hall of Fame running back Gale Sayers, and said he’s shown his kids highlights of the Bears great on YouTube.

** The Browns protected McCrane, quarterback Garrett Gilbert, running back Dontrell Hilliard and tackle Greg Senat from being poached off the practice squad by another team this week.

** Stefanski quickly pulled up his mask during the Zoom call when asked about other coaches being fined $100,000 by the league for not cover their faces during games.

“This thing is not coming off,” he said.

Notes: Defensive end Porter Gustin motivated by no margin for error, teams with Myles Garrett for huge play vs. Bengals
Notes: DC Joe Woods says return of injured trio will allow him to be more versatile, should help defense get off field