Odell Beckham Jr. finds “acceptance,” understands he’ll have to learn where he fits in offense led by running game 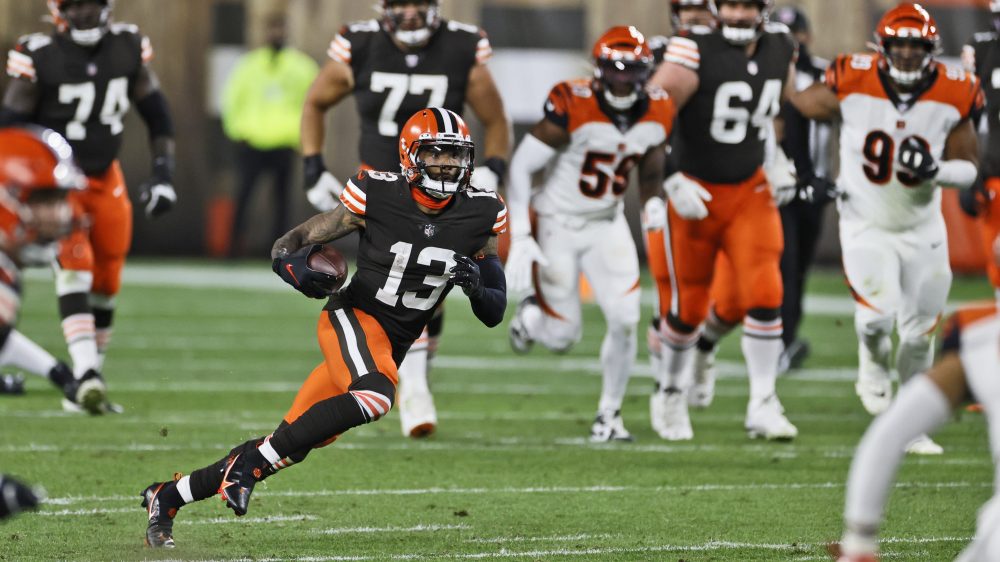 BEREA — The rushing attack has become the engine of the Browns offense. Nick Chubb and Kareem Hunt rank among the best running backs in the league, the wide zone run scheme is the base for coach Kevin Stefanski’s system and the passing game is rooted in play-action.

Receiver Odell Beckham Jr. could be resentful for what will likely be diminished opportunities but says he’s learned not to be.

“One of my biggest growths has come in acceptance in a sense and for me knowing it is probably not going to be that kind of season,” he said Thursday.

Beckham is accustomed to being the center of attention and a focal point of the offense. He was rookie of the year in 2014 and a three-time Pro Bowler with the Giants and had his fifth 1,000-yard season in 2019 in his first year with the Browns.

He’s also a student of the game and understands the state of the offense, especially coming off a 35-30 win over the Bengals in which Chubb and Hunt combined for 210 yards and three touchdowns on the ground. Not counting the kneel-down to end the game, Stefanski called runs on nine of the last 10 offensive plays.

“You have two legitimate No. 1 backs in the backfield, and our team is very, very, very good at running the football so you have to play to your strengths,” Beckham said. “Then I think you learn where you fit in and where you are able to make your plays and how you can help the team.

Baker Mayfield targeted Beckham 10 times in the opening loss at Baltimore but only connected three times for 22 yards, although Beckham drew two penalties on the Ravens that brought first downs. They were much more efficient against the Bengals, with Beckham catching four passes on six targets for 74 yards, including a 43-yard touchdown.

“It starts first with the team, and whatever is best for the team is what we are going to do. I think he understands that,” coordinator Alex Van Pelt said. “Whenever you have the ability to run the ball as effectively as we did on Thursday night, he may not get as many opportunities, but there are going to be games now when things are not going quite that way and we are going have to lean on him to catch the ball and run routes and get open.”

Receiver Jarvis Landry doesn’t generate the conversation his best friend Beckham does but he also wants the ball and to continue his streak of five Pro Bowls. Landry leads the team with eight catches for 107 yards.

“The strength of our team right now has been our running game, and we want to continue to try to use that as much as possible, but I think we are smart enough to recognize when the ball needs to be in the air and not on the ground,” he said. “We have a lot of unselfish guys in this building. That is what it is going to take when you have a lot of Pro Bowl-caliber players on one team to be unselfish and understand that when a ball comes your way, just take advantage of the opportunities, whether they be few or many.”

The offense will evolve through the season and defenses could adjust to try to stop the run game. Landry believes all the playmakers, including tight end Austin Hooper, will have plenty of chances to contribute to wins.

“I do not think anybody is panicking right now about targets or anything like that,” Landry said. “Our main focus is just trying to win games.”

Beckham said he learned from ESPN’s Michael Jordan documentary to play the game within the game. So if the game plan is run-heavy, he’ll set new goals and work on something else, such as his release off the line.

His route-running looked as crisp as ever against the Bengals, especially on the touchdown, when he ran an out-and-up and got cornerback William Jackson III to bite on the first move.

“The touchdown catch was an extremely disciplined route,” Van Pelt said. “He did exactly what he was asked to do. He was at the right depth. It was a play that we had set up a little bit earlier in the game. He made it look exactly the same. His precision of route-running was excellent.”

Beckham knew the ball was coming his way when he lined up to the left. Mayfield faked a handoff to the right, rolled left and made an accurate throw.

“I think for him, it is not a lack of confidence thing,” Landry said. “It is just getting the opportunities to make plays, and when they are there, he is going to make them.”

Beckham had another chance for a long touchdown down the same sideline, but Jackson grabbed his jersey as he was pulling away, the pass fell incomplete and the official didn’t throw a flag. Beckham again pointed to his improved maturity.

“I think a younger me would have been more upset. And now just realizing, it is like life: You just kind of roll with the punches,” he said. “Right now, my mentality is to keep playing and know that those calls probably will not get called and just to fight through that.”

Stefanski isn’t worried about balance as a play caller. What’s important is having the threat of the run and the pass throughout the game.

“Obviously OBJ was a little bit banged up (last year) but he still could take the top off of a defense,” left guard Joel Bitonio said. “You saw it last week on the long touchdown. He still opens it up for other people.

“I do think Odell really gives us a deep threat over the top that people have to respect.”

Baker Mayfield gains confidence playing in Kevin Stefanski’s system, behind the rebuilt line
Impressive and inspirational: Larry Ogunjobi off to great start, determined to take game to next level in pivotal year