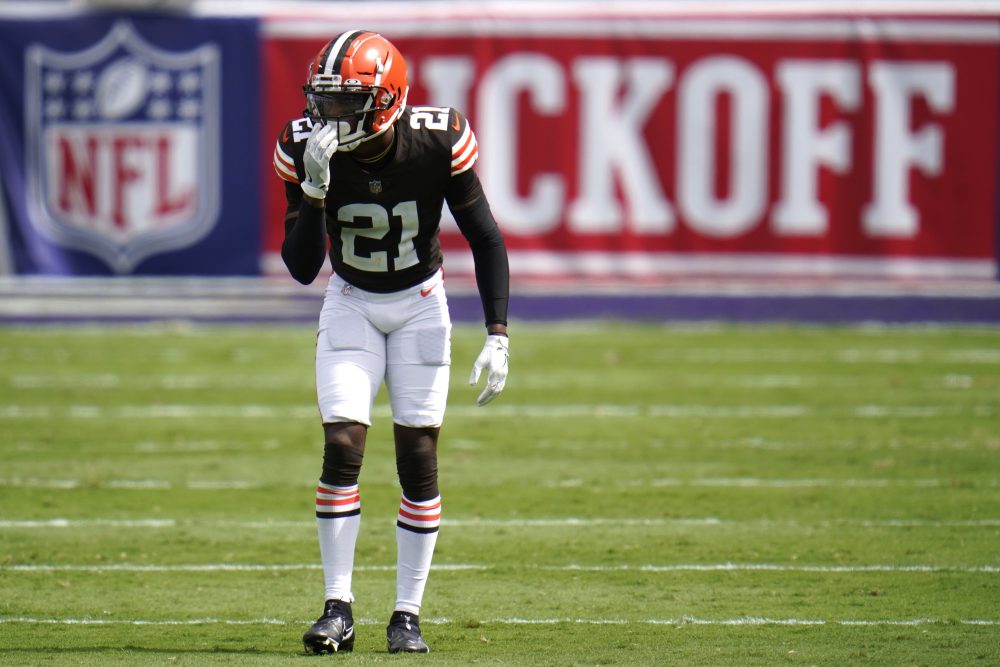 BEREA — The Browns may be without both starting cornerbacks Sunday when they face quarterback Dwayne Haskins, receiver Terry McLaurin and the rest of the Washington offense at FirstEnergy Stadium.

Greedy Williams (shoulder) was ruled out for a third straight game and Denzel Ward (groin) was listed as questionable Friday on the official injury report.

Ward was hurt in practice Thursday and didn’t practice Friday. He watched closely during the period open to reporters.

“We listed him as questionable and that is exactly what he is,” coach Kevin Stefanski said. “We have a few hours here to see how he does, and then we will make a determination before the game.”

Williams was injured Aug. 24, returned to practice Monday and was limited all week. Terrance Mitchell will again start in his place.

If Ward doesn’t play, Kevin Johnson would start. Johnson returned to practice this week after his liver was lacerated during practice Aug. 19. He was a full participant Thursday and Friday.

“Excited to have Kevin back,” Stefanski said. “He has looked really good throughout the week, and then we just have to be mindful of this is his first football action.”

Johnson would be the nickelback if Ward plays. Tavierre Thomas, who struggled against the Bengals in a 35-30 win Sept. 17, would likely remain in the slot if Johnson is needed outside.

Linebacker Mack Wilson (knee) and defensive end Adrian Clayborn (hip) were listed as questionable. Wilson has been out since Aug. 18, and Clayborn has two sacks in two games.

“We want to make sure we use all of the remaining hours before gametime to make a prudent decision,” Stefanski said of Wilson.

With Vernon out and Clayborn questionable, the depth at end will again be tested. Porter Gustin played opposite Myles Garrett against the Bengals after Clayborn joined Vernon on the sideline. Joe Jackson is the other end on the roster.

“Porter is the guy that every coach wants in the room,” line coach Chris Kiffin said. “He’s one of those guys that you know is going to get the job done, he is going to do everything that you ask him and he is going to do it with the technique that you coach and make you look really good as a coach. He just works his tail off.

“I was telling somebody the other day that he was picking up breakfast and he got some pre-made eggs. I said, ‘Why don’t you get fresh eggs?’ He said, ‘That is not time-efficient, Coach. Can’t wait for those.’ That is his mindset. Love that guy.”

The Browns teamed with the Cavaliers and Indians for a public service announcement encouraging fans to register to vote or check their registration. For more information, visit RocketMortgageFieldHouse.com/VOTE.

Receiver Odell Beckham has taken up the cause, designing a Vote T-shirt worn by him and his teammates before the game against the Bengals. He said during an Uninterrupted interview he’s never voted.

“It felt brave to be able to admit to myself, the world and everybody that that was my mentality and that was how I processed things or how I felt or what I had learned just that my vote would not really matter,” he said Thursday. “Whether it was lazy or whether it was an excuse just for me not voting, I think coming out and saying that, I kind of take on more heat than someone else, and it allows someone else who is in that same situation to understand that it is OK and you have an opportunity to correct your wrongs or your mistakes going into the future. Your voice can actually now be heard, and there is no better time than the present for your voice to be heard.”

Your vote makes all of us stronger.

Text BROWNS to 26797 to check your voter registration status and more.@Indians | @cavs pic.twitter.com/36oTHdB8Yp

KhaDarel Hodge has cemented himself as the third receiver behind Beckham and Jarvis Landry. Hodge has played 73 snaps compared to 21 for Rashard Higgins, and Stefanski emphatically shot down the notion Hodge has been playing just because he’s a good blocker.

“He does his job. He is always assignment-sound, a great effort player, good speed and catches the balls as they come his way,” Stefanski said. “He really fits our smart, tough type of football player that we are looking for from this team. His teammates really like him. He is the game captain this week, and I think the guys are excited about that.”

Hodge has three catches for 51 yards and three first downs. He was primarily a special teamer last year, finishing with four catches for 76 yards.

The coaches believe tight end Austin Hooper will have a larger role in the offense as the season progresses. They also say he’s contributed in other ways than his four catches for 37 yards in his first two games after signing a four-year, $42 million contract as a free agent.

“Geez, Hoop is just a team guy,” coordinator Alex Van Pelt said. “He goes out and he does everything the right way. His run-game blocking is something that probably does not flash on TV, but you see it often on the field. He knows how to get other people open, as well.”

The matchup Sunday will have a female coach on each team and a female official, a first in NFL history. Callie Brownson is the Browns’ chief of staff, Jennifer King is a coaching intern for Washington and Sarah Thomas is the official.

** Jason Wright was a Browns running back from 2005-08. He was hired by Washington in August, becoming the first Black president in NFL history.

“He has had a great impact,” coach Ron Rivera said. “Jason is a very bright, very even-keeled man. He came in and he had a plan. This is a guy who is going to really help us take a step forward as we try to correct a lot of things that we have had issues with over the past.”