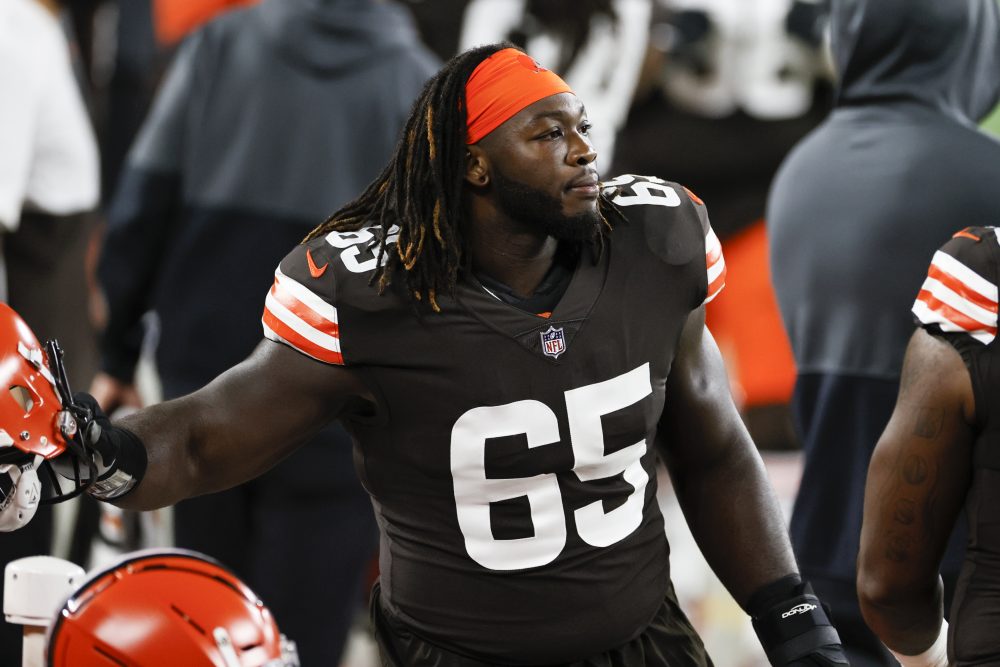 The defensive tackle started a new training program in the offseason and worked it from January until two days before he reported to training camp in July, undeterred by obstacles presented by the coronavirus pandemic.

He posts inspirational messages on Instagram daily in case one of his followers is having a difficult time.

He refuses to dwell on the negative, even with bad news seemingly running on a loop at the bottom of the TV screen.


“Outlook determines outcome,” Ogunjobi told The Chronicle-Telegram in a phone interview Thursday. “A lot of people got it way worse. I’m praying for them. That’s why I can’t take my position and what I have for granted. That’s my respect to them, taking each and every day as another opportunity to be great at what I do, because there’s somebody else in this world that would kill for the position I’m in.”

Ogunjobi, 26, is off to a tremendous start in what he acknowledges is a huge season in his career. He’s in the fourth and final year of his $3.9 million rookie contract, so millions of dollars are riding on his performance. He has four tackles, a tackle for loss and a forced fumble in two games for a run defense ranked sixth in the league, earning an 86.7 grade from Pro Football Focus. He trails only Pittsburgh’s Tyson Alualu among NFL interior lineman.

“I don’t try to get caught up in all that,” Ogunjobi said. “But I’ve got parents and friends that send it to me.”

Plenty of players get distracted, resentful or put too much pressure on themselves in a contract year. That’s not Ogunjobi. Anyone who went from an obese 350-pound 16-year-old to a sculpted 6-foot-3, 305-pound fitness fanatic is too disciplined to betray his motto of “control the controllables.”

The Transformer: Ogunjobi used football to change his body and life

Ogunjobi wants a long-term deal with the Browns. He lived through 0-16 as a rookie and would like to be around when the going gets good.

“Of course. This is where I got drafted to,” said the third-round pick out of the University of Charlotte. “You build a relationship with your teammates and your fans and just the people of Cleveland. You walk places, people recognize you and you have a conversation. It’s cool.

“When you start something, you want to be there for it. That’s how I am.”

Ogunjobi was thrilled when defensive end and close friend Myles Garrett — the No. 1 pick in 2017, 64 picks before Ogunjobi — signed a five-year, $125 million extension in July. Ogunjobi said Garrett is a “generational-type” player and deserved every penny.

Ogunjobi is still waiting for his money. He’s leaving negotiations to his agent but said he hasn’t talked with the Browns about an extension. Agent Brian Ayrault told The Chronicle on Friday he doesn’t talk about his clients’ contract situations in the media.

It’s worth noting teams usually don’t wait until the final year of a deal to come to terms on an extension, and Ogunjobi is less than six months from hitting the open market.

“My main focus is just to be the best I can be,” he said. “I know everything is going to take care of itself. I’ve been blessed, I’m extremely grateful to be in the position I’m in.”

He’s the type of player and person general manger Andrew Berry and coach Kevin Stefanski say they want to keep. Their requirements of smart, tough and accountable could be in his Instagram profile, and he was Stefanski’s pick to be the Week 2 game captain.

“He means a lot. He is like maybe the soul of the defensive line,” coordinator Joe Woods said. “Just when you hear him talk, he is always talking about something meaningful.”

“Larry plays really hard,” Stefanski said. “He practices hard. He plays hard. It is important to him.

“He has a great combination of power and quickness. He is somebody that we rely on. He is one of the leaders of the football team.”

Ogunjobi is usually soft-spoken but asked to address the team last year as it failed to meet the great expectations. He stressed being accountable and concentrating on the details in practice. He picks his spots to use his voice.

“I’ve always learned that sometimes you don’t have to talk first, you have to listen to really understand,” he said. “And I’ve done a good job of that, just getting a better understanding of everything and being mindful and understanding that when I do talk people listen. So I make sure what I’m saying is the right thing and the real thing.”

Despite Ogunjobi starting 31 games the last two years — he was suspended for one for his role in the brawl with the Steelers last season — and getting 5.5 sacks each year from the interior, the front office hasn’t secured him for the future. And in the offseason Berry added a pair of tackles — free agent Andrew Billings (he opted out of the season due to coronavirus concerns) and rookie Jordan Elliott, drafted No. 88 in the third round.

Ogunjobi said he didn’t view the moves as the Browns bringing in his replacements.

“Because I can’t control that. All I can control is what Larry Ogunjobi does on the football field every time we play. And I’m going to handle that,” he said. “I’m here to do a job, I’m here to be the best, I’m here to take care of my family, make my dreams reality.

Being in a good headspace is something Ogunjobi mentioned often during the 27-minute interview. Just like in the weight room and on the practice field, he works hard to have success there.

He started posting inspirational messages in college but got serious when he joined the Browns, citing the “amazing platform.” He reads a lot and has compiled a “whole archive” to share with his nearly 65,000 Instagram followers.

He went with Progress over Perfection on Friday and has a couple of favorites: Growth without change is impossible and The world is changed by your example, not by your opinion.

“I’ve always been a motivational type of person,” Ogunjobi said. “It’s always good to hear that kind of stuff to push somebody in the right direction. You just never know what somebody may be going through.

“I always wanted to be able to help. I watched my parents, they’ve always been givers in some kind of capacity. So for me, every morning I wake up I want somebody to know that there’s somebody that cares about their well-being and them having a positive impact in the world.”

He’s heard from people appreciative and affected by the posts and believes attitude is something people can control, returning to “outlook determines outcome.”

That’s a big ask in a country with a pandemic that’s killed more than 200,000 people and constant reminders of racial injustice, including the lack of indictments for the police in the death of Breonna Taylor.

“Yeah, it sucks,” Ogunjobi said. “It’s hard to hear the verdict, to hear the things that are going on. But at the same time, you never know who’s watching you. So if I look defeated, if I show that I’m down, that energy somebody else is going to pick up and they might carry that. And I don’t want to be that example.

“I can’t be on the front lines right now protesting and doing all those kind of things. Do I want to? Of course. There’s so many negatives going on in the world and I hate it. It’s a difficult time. But all I can do is continue to bring awareness, to be proactive, to have the conversations, to talk about legislation, to do whatever I can to make a change.”

He’s part of the team’s 11-player social justice committee and remains confident its work can make a difference.

“I feel like the guys on the social justice committee we have are very, very, very, very passionate about bringing about change,” he said. “Change isn’t something that just happens overnight. It does take time. But you still have to be proactive. Because doing something is better than doing nothing.”

He said the players have discussed following the lead of the NBA and sitting out a game to shine the spotlight on systemic racism.

Ogunjobi was already in incredible shape, looking as lean and muscular as 305 pounds can. Then he changed offseason training sites and partners and focused on balance, mobility and core strength. The video of him kneeling on a ball and working the ropes with his arms is beyond impressive.

While many struggled to keep up a normal routine with pandemic restrictions, Ogunjobi found a way.

“I just wanted to be great and just really wanted to handle my business,” he said. “There’s always going to be an excuse, but there’s always an answer, too. Everything that’s happened is just hard work and constant effort.”

“Stronger. Faster for some reason. More shifty,” Richardson said. “The guy, he is going to be all right.”

Ogunjobi has 138 tackles, 12 sacks, 25 tackles for loss and two forced fumbles in his career. With that experience and in Woods’ scheme that lets him attack, he’s ready to take a big jump, earn a Pro Bowl spot and be considered among the league’s best interior linemen.

“I feel like there’s been flashes,” he said of playing like a Pro Bowler. “But knowing what I know now, there just needs to be more.

“I have the ultimate confidence in myself to go out there and do what I’ve been called to do. I know my work ethic and my drive is going to take me where I need to go.”

Odell Beckham Jr. finds “acceptance,” understands he’ll have to learn where he fits in offense led by running game
Myles Garrett won’t call his shot but looks for more big plays in return to hometown to face Cowboys