O-line looks to neutralize, D-line wants to overshadow Washington’s hyped front four as Browns try to get above .500 for 1st time since 2014 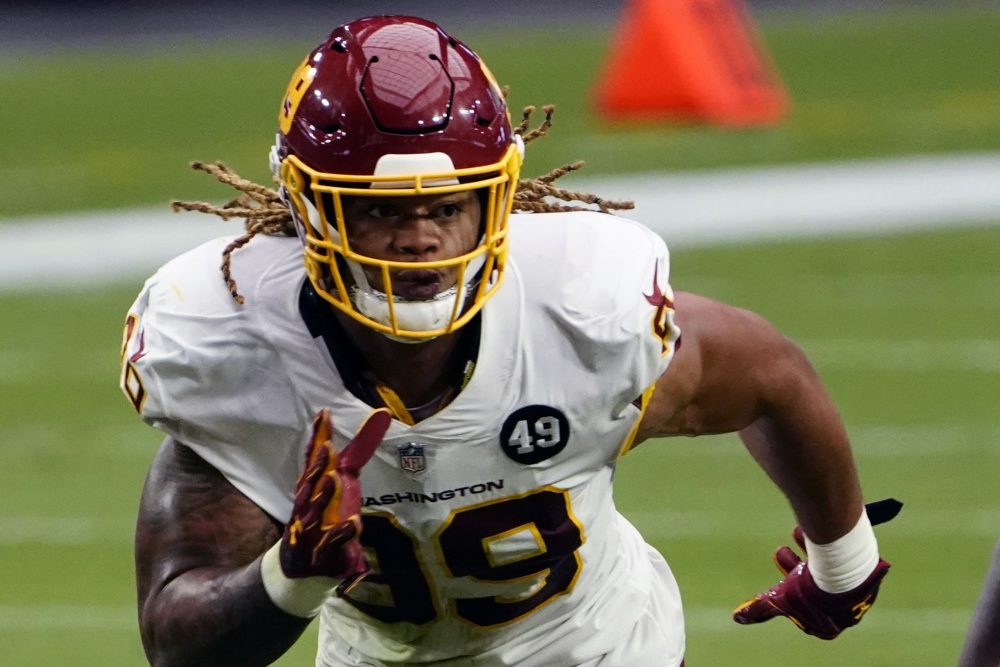 Cleveland’s O-line that ranks fourth in the NFL with two sacks allowed vs. Washington’s D-line that has a league-high 11 sacks.

The biggest, baddest and best matchups to watch Sunday at FirstEnergy Stadium will take place in the trenches. They seem destined to decide the battle between 1-1 teams, as the Browns look to move above .500 for the first time since Week 14 in 2014.

Just how Garrett likes it.

Calling Young Washington’s best player is premature. He’s only played two games since being drafted No. 2 out of Ohio State, but he already has 2.5 sacks, a forced fumble and the admiration of Browns players and coaches.

“When you are on a roll, you want to stay on a roll, so they are going to look to feed the hot hand in the young fella,” Garrett said. “He is going to go out there with a little chip on his shoulder.

“I like his game. I like how he gets after it. He has good timing off the ball, and he has good hands. He is tenacious when he is going after the pass. He is definitely not a bad run defender. He is a pretty complete player.”

Garrett was the No. 1 pick in 2017, so the TV cameras will be focused on the edges no matter which team has the ball. Garrett has only one sack through two games, but the strip-sack near the Cincinnati goal line was the biggest play in the Week 2 bounce-back win.

“I want to be a part of the reason we win every game,” said Garrett, who has 31.5 sacks in 39 games. “We are going to need more of those and more frequently.”

“We know he is capable of wrecking a game when he is playing at his best,” coordinator Joe Woods said. “I think that is what he is focused on, and hopefully that shows up this week.”

Of course, Garrett and Young won’t be on the field at the same time. So Wills and right tackle Jack Conklin will be responsible for keeping Young, who bounces between sides, away from quarterback Baker Mayfield. The Browns signed Conklin to a three-year, $42 million deal and drafted Wills with the No. 10 pick for just such a matchup.

“I am feeling good. Just trying to come in each week and get better,” Wills said.

He’d never played left tackle in a game before the opener after spending his high school and college careers at right tackle.

“It was an easy transition for now,” Wills said. “I am still trying to get better, but it was not as difficult as I thought it was going to be.”

“He has really stepped up,” coordinator Alex Van Pelt said. “Really, you forget he is a rookie when you watch him out there during the game. This challenge will be a good one for him, but we expect him to step up to it.”

Veteran left guard Joel Bitonio said the next test for Wills will be handling pass rushers after they’ve studied his film. Offensive line coach Bill Callahan stressed the difficulty of facing a different type of elite rusher each week.

“I do not think you ever settle into left tackle because your challenges are dramatic week in and week out,” Callahan said. “Jed is going to have to adjust and adapt his strikes and his counters and find those windows of opportunity. Everybody has a different move and everybody has a different combination and a different window where you have to obviously time up your hands.”

Callahan has been blown away by Young’s entrance into the NFL.

“He has all the tricks and all the toolbox techniques that you want to have for a great defensive end,” he said. “He is going to be great in our league, make no mistake about it.”

“They are like a racehorse coming out of the chute,” Callahan said.

Washington followed eight sacks in the 27-17 opening win vs. Philadelphia with three of the elusive Kyler Murray in a 30-15 loss to Arizona. The linemen all move across the formation looking for the most favorable matchups.

“With Sweat and Chase Young on the outside, big, athletic, fast, strong,” coach Kevin Stefanski said. “Guys with force, guys that can play with power inside. Guys that are slippery as rushers inside. It is a very, very formidable front.”

The Browns’ season came to a screeching halt last year when they were dominated by the stud-filled defensive line of the 49ers. Mayfield was sacked four times in the 31-3 embarrassment that followed the year’s best win in Baltimore and started a four-game skid.

This year Mayfield has greater trust in the rebuilt offensive line and can turn to the league’s second-ranked rushing attack (176.5 yards a game) to take the pressure off the passing game and hopefully slow down and wear down Washington’s front.

“We have to find completions, get the ball out, establish the run game and not let them be the game-wreckers,” Mayfield said.

The numbers may not show it as clearly — five sacks — but the line is also the strength of the Cleveland defense. End Olivier Vernon (abdomen) won’t play, but Garrett is joined by tackles Sheldon Richardson and Larry Ogunjobi and ends Adrian Clayborn and Porter Gustin.

With injuries and issues in the back seven, the Browns would benefit from the front four dominating against a Washington offensive line without three-time Pro Bowl guard Brandon Scherff.

“At some point you have to make a decision that it’s got to be us,” Ogunjobi said. “I’ve seen teams do it. We’ve just got to continue to take control and we’ve got the guys in the room to do it. I’m excited.”

Much of the conversation during the week was spent on Washington’s D-line. The Browns have the chance to flip the script.

“They have talent over there. A bunch of first-rounders. Sturdy guys,” Richardson said. “If that is what the media wants to talk about, then let them talk about it. They still have to show up on Sunday, just like we do.”