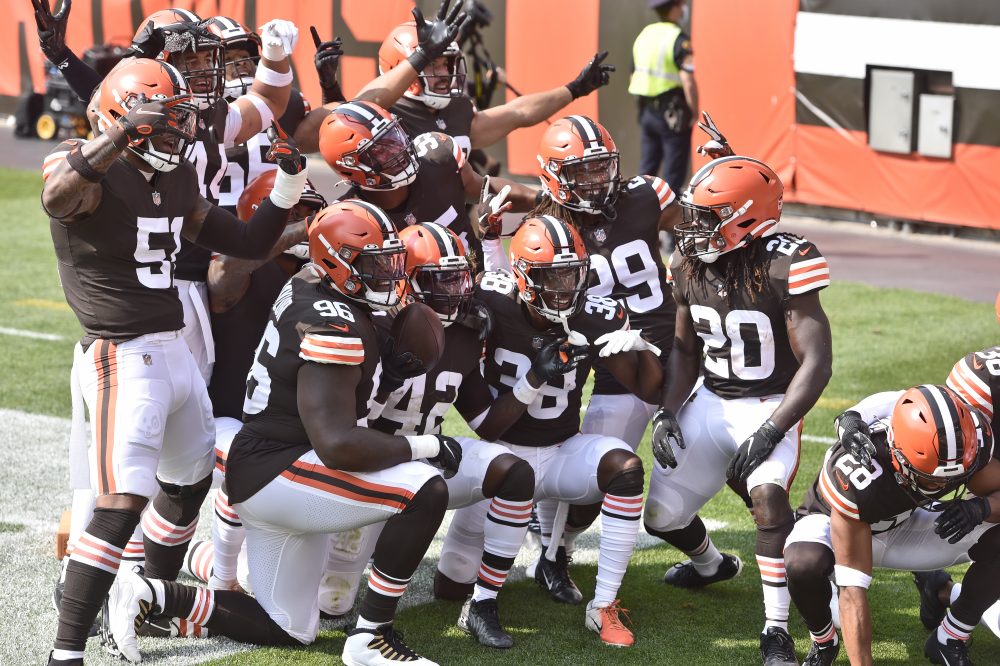 CLEVELAND — When the defense was done taking the ball from Washington, when the offense was finished converting the five turnovers into 24 points, when Washington raised the white flag in the final minutes, the Browns walked off the FirstEnergy Stadium turf with a winning record.

Those who’ve been here even a couple of years know it means something for an organization that hasn’t been to the playoffs since 2002, hasn’t finished with a winning record since 2007 and went 1-31 in 2016-17.

“I made that very clear to the guys,” said defensive end Myles Garrett, who had a strip-sack for the second straight game to seal the win. “We have a chance that we have not had in a long time just to have a winning record, whether it is early or late. We have to take advantage of the opportunity. We have to start changing history here and our legacies right now.”

“First and foremost, this is a football town,” quarterback Baker Mayfield said. “They deserve to have a great franchise and a great team, but we are worried about right now. Like I said before the season started, it is about building that culture, bringing the right guys in and pushing this thing in the right direction, which is what we have been doing and we are trying to do. We have to build on this momentum and keep going one game at a time.”

The Browns were able to reach the sad but significant milestone because they were opportunistic and resilient. And they were simply better than the Washington Football Team (1-2).

The Browns didn’t do much of anything in the first and third quarters, yet still did enough to walk away with a 17-point win in front of 6,000 fans on a gorgeous fall day. The difference was the 5-0 turnover margin.

Washington second-year quarterback Dwayne Haskins was intercepted by safety Karl Joseph and linebackers Malcolm Smith and B.J. Goodson after going four games without throwing a pick and throwing only seven in his first 11 NFL games. The Browns didn’t have an interception in the first two games, but broke through despite rotating guys across the defense as they continued to deal with injuries.

“One thing we learned is that turnovers come in bunches,” Joseph said. “It was great for me to start it off, and then you saw how that trickled down. Other guys started getting other opportunities and capitalized on it.”

While Haskins (21-for-37 for 224 yards, two TDs, three INTs, three sacks, 58.8 rating) was giving away the ball like Halloween candy, Mayfield ended his streak of throwing an interception in eight straight games. He was bailed out early in the second quarter when receiver Odell Beckham turned into a defender and knocked a potential pick away from safety Troy Apke, but otherwise protected the ball and capitalized on the takeaways.

Mayfield went 16-for-23 for the second straight game, this time for 156 yards, two touchdowns, two sacks and a 117.3 rating. He thanked the defense for the short fields following the turnovers and blamed himself for the sacks and the struggles in the first and third quarters.

“Taking care of the ball is the most important thing,” he said. “I could have played way better. I could have gotten the ball out and saved a couple of those sacks. The protection was great.”

The Browns rallied to lead 17-7 at halftime but fell behind 20-17 in the third quarter. They gave up two touchdowns and didn’t have a first down until less than a minute left in the period.

Beckham Jr. finally got the Browns back on track, and the offense scored a touchdown without the benefit of a turnover for the first time.

It went 75 yards in 11 plays to retake the lead at 24-20 with 11:14 left in the game. The drive would’ve stalled quickly without Beckham’s 15-yard catch over the middle at the Cleveland 38-yard line on third-and-12. He caught four passes for 59 yards.

“That was huge,” Stefanski said. “We were stubbing our toe on offense and we were not doing a very good job for the team. We were putting the defense in some tough spots.

“Odell continues to just, the dude plays hard and he practices hard. When he gets an opportunity, he makes a play for us. He did a great job, and the quarterback did a nice job there and Kareem (Hunt) had a nice blitz pickup.”

After fullback Andy Janovich caught a pass for 13 yards, including a nifty spin move, the Browns turned to the run, with the highlight a 25-yarder by Nick Chubb. Mayfield finished the drive with a 3-yard touchdown to rookie tight end Harrison Bryant, his first in the NFL. Mayfield moved right to avoid pressure and found Bryant cutting across the end zone uncovered.

The Browns stayed awake and put away Washington.

Goodson got the third interception on Washington’s next drive, giving the offense the ball at the Washington 35-yard line. Beckham caught a 15-yarder and Chubb went for the 20-yard score as he followed pulling right guard Wyatt Teller around left end.

Washington lost rookie defensive end Chase Young, the No. 2 pick, with a groin injury in the second quarter and defensive tackle Matt Ioannidis with an arm injury but still had four first-rounders on the defensive line. They made life tough for Cleveland’s second-ranked rushing game, but Chubb, Hunt and the line wore down Washington with volume. Chubb carried 19 times for 108 yards, a 5.7 average and two touchdowns. Hunt ran 16 times for 46 yards and caught two passes for 19 — a one-hander down the sideline to extend a drive and a 9-yard touchdown.

“You never want to take any of that for granted,” Mayfield said of the running backs. “We have special guys and we have a great offensive line.”

The line didn’t dominate like it did in the 35-30 Week 2 win over the Bengals but it held its own against the defense that entered with a league-high 11 sacks and was rewarded with the big runs of Chubb and Hunt. The Browns improved to 2-0 at home for first time since 2004.

“We are excited, but we have more work to do,” Hunt said. “We can’t be satisfied here. We have got to keep going out there and winning. Still a lot of football to play.”