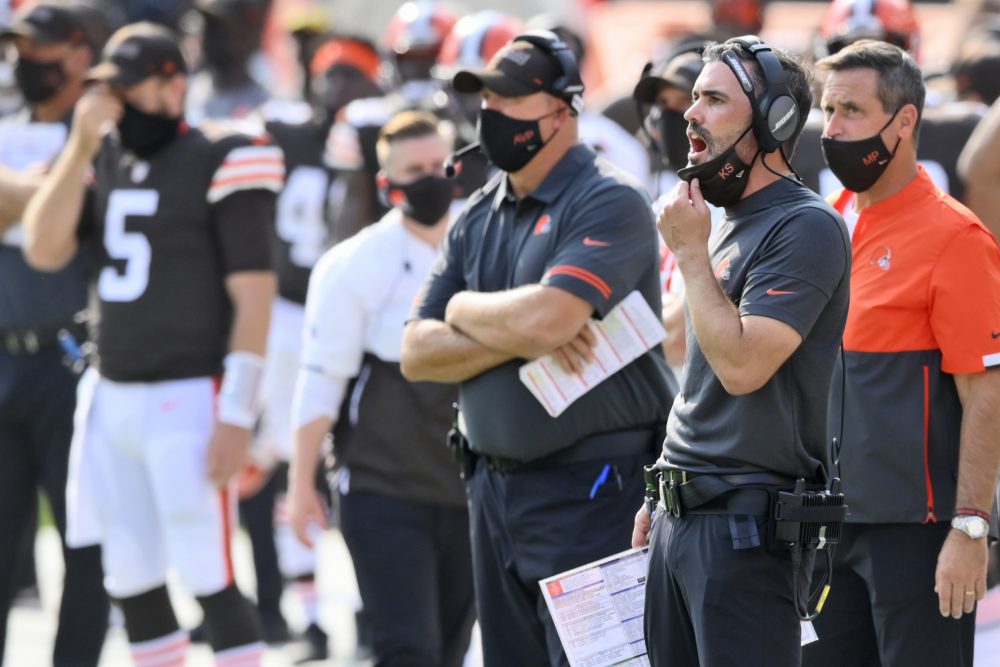 If you had “six years” in the “How long will the Browns go without having a winning record?” pool — you win.

The Browns now have a winning record.

On Sunday they beat the Washington No Names 34-20 to push their record to unfathomable heights: 2-1. It’s the first time the Browns have won more games than they’ve lost since the Mike Pettine Era. On Dec. 7, 2014, they had a record of 7-6. That’s right, they went six years between winning records. Not that anybody was counting or anything.

Following Sunday’s game, Browns coach Kevin Stefanski refused to take the bait when asked about his personal jubilation factor over getting that particular gorilla off the organization’s back.

Hey, Rome wasn’t built in six years, and Stefanski is only three games into his NFL head coaching career. But Sunday was another significant milestone, besides it being a history-making win.

On Sunday the Browns played their most complete game yet, which is important, but also encouraging, because it shows growth by the players and the coaching staff. They’ve gotten better with every game, which is not easy in today’s NFL.

After falling behind 7-0 in the first quarter, the Browns outscored Washington 34-13 the rest of the way. Cleveland’s defense forced five turnovers and the offense didn’t commit any.

The showstopping turnover was Myles Garrett’s coup de grace fourth-quarter trifecta, when he sacked the No Names’ quarterback, forced him to fumble and then recovered the fumble. Not on three plays. On one play.

“No sack is complete if you don’t get the ball,” said Garrett.

“We’ve got to start changing history here. We’ve got to do this every week,” said Garrett.

The Browns weren’t perfect, but they surged in all the right areas at all the right times to grab the game by the throat in the second half. When the offense sputtered, Stefanski called on his two ground hogs, Nick Chubb and Kareem Hunt, to churn out important yardage behind a Browns offensive line that got better as the game unfolded.

Maybe he doesn’t need to be Drew Brees for the Browns to win. Maybe Mayfield’s Sunday is enough. His 117.3 quarterback rating reads better than it looked, but you can’t quibble with the result. There were some chaotic scrambles and the occasional misfire, but he got a lot of help from the well-publicized weapons surrounding him, and he didn’t take any crazy gambles or make any major mistakes.

That’s probably true, but he was good enough. He completed 16 of 23 passes — none of them to the other team — for 156 yards and two touchdowns. He did get sacked twice on a couple of his patented “abandon ship!” freelance escapades. But overall, it was a safe, efficient performance.

It was a performance that didn’t scream “Pro Bowl” but it also didn’t scream “DeShone Kizer.” Maybe this quarterback playing just OK is enough for this team to win.

“Baker did a nice job of operating,” said Stefanski, revealingly.

The Browns are three games into their season and they’ve shown progress every week. It’s exactly the kind of progression that’s needed for this team to grow under Stefanski, and for Stefanski to grow coaching this team.

It’s certainly not just a breath, but a typhoon of fresh air from the last several years, when the Browns’ ship seemed rudderless and captain-less in a turbulent, unforgiving sea.

Last year’s madness has given way to this year’s steady, mature, drumbeat of improvement. Hey, the Browns haven’t had a single 18-penalty game yet, there’s been no shouting matches on the sidelines and their coach hasn’t been photographed wearing a “Pittsburgh Started It” T-shirt.

If that’s not progress, this isn’t football.

The Browns have won two games in a row and played better in each of them. Sunday in Dallas will be their biggest challenge since the messy, season-opening spanking in Baltimore.

The Browns defense is still not completely healthy, but the five turnovers and three interceptions Sunday prove the personnel decisions and performances are improving.

Don’t look now, but all of a sudden, the Browns are looking like a fully functional football franchise.

Browns-Washington Football Team Preview: 3 things to watch, 3 key numbers, the prediction
Analysis: Browns’ good start is a positive sign — but it is only a start