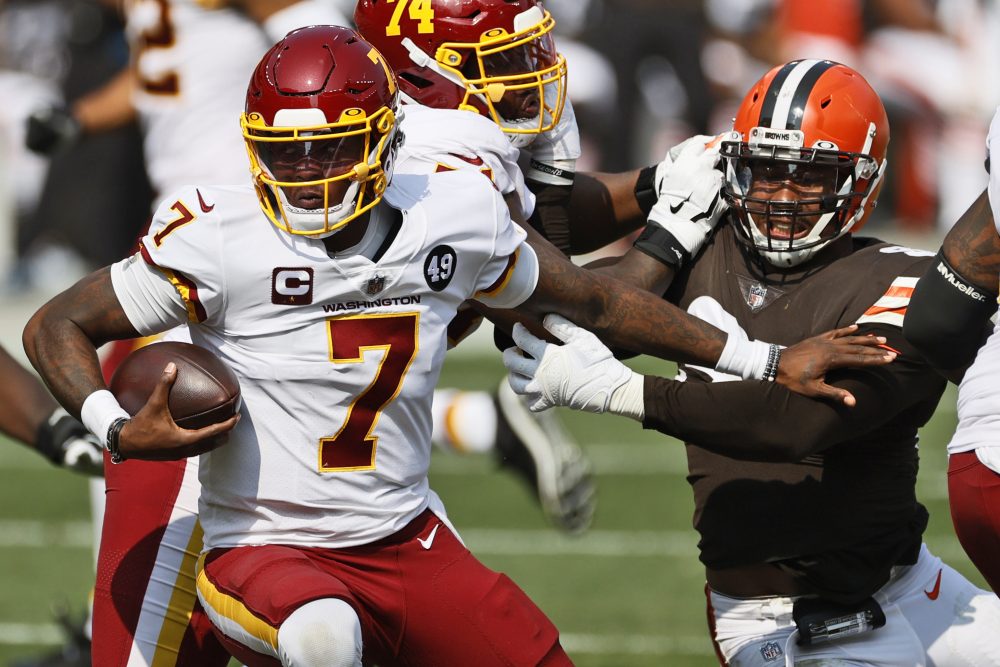 CLEVELAND — The game was starting to tilt away from the Browns in the second quarter. Washington had the lead and was on the move again as quarterback Dwayne Haskins fired for tight end Logan Thomas running down the seam in the red zone.

Safety Karl Joseph was waiting to gobble up the overthrow for his first interception with the Browns.

The takeaways didn’t stop for the Browns, and they rallied twice to beat the Washington Football Team 34-20 Sunday at FirstEnergy Stadium.

“Defense, I thought was outstanding,” coach Kevin Stefanski said. “I challenged them to get that rock, and they did.”

Karl Joseph with the takeaway‼️

(aaaand s/o to @TavierreT on the recovery 😳)

The performance was even more impressive given the injuries across the defense. Cornerback Denzel Ward (groin) started but was bothered by the injury and didn’t play in the second half. End Olivier Vernon (abdomen) and cornerback Greedy Williams (shoulder) were inactive, and linebacker Mack Wilson (knee) and end Adrian Clayborn (hip) were used sparingly.

The coaches rotated players at all three levels and experimented with a six-defensive back package that included new safety Ronnie Harrsion. No matter who was on the field, the Browns were coming away with the ball.

Linebacker Malcolm Smith followed Joseph with a second-quarter interception, and linebacker B.J. Goodson added one in the fourth to go with his end-of-half fumble recovery. Haskins, the 2019 first-round pick out of Ohio State, had gone four games without throwing a pick but made ill-advised decisions and off-target throws.

“It is important. This is a long season,” Stefanski said of getting contributions from so many defenders. “Whether it is offense or defense, we want to use all the players, especially the guys that provide versatility.”

For the second straight game, end Myles Garrett had a pivotal strip-sack. Against the Bengals, he changed the momentum. This time, he sealed the victory … and recovered the fumble, too.

He got around left tackle Geron Christian Sr. with 6:30 left and the Browns protecting a 31-10 lead. Cody Parkey kicked a 30-yard field goal for the final margin.

“I had been trying to set him up with speed to power and some jam moves early on to get his hands and get him to open up a little bit sooner,” Garrett said of Christian. “I was able to get on the backside of the strip. I saw that he had not thrown it yet, and no sack is complete without getting the ball.”

Stefanski loves that Garrett has made forcing turnovers routine.

“That is really what we expect from Myles. I know he expects it of himself,” he said. “We need him to play great, and when it turns into a pass-rush game, he is built for that. I thought he did a great job. You get an honest day’s work out of Myles Garrett. Really proud of him.”

Garrett had another sack to give him three for the season and 33.5 in his career. They’re the eighth-most for an NFL player in his first 40 games.

He flashed back to the 2018 opener in which the Browns tied the Steelers at 21 despite six takeaways.

“In this one, we just put it all together,” he said. “That is real team ball, complementary ball that we played. I am proud of how we all came together.”

Joseph’s game-changer almost wasn’t. He returned the pick 49 yards as he weaved through traffic but was stripped. Nickelback Tavierre Thomas jumped on the fumble to set up the offense at the 28, and Nick Chubb scored from 16 yards three plays later.

“I was grateful that Tavierre was able to get on that fumble,” said Joseph, who drilled receiver Antonio Gandy-Golden in the first quarter. “It almost broke my heart. That was great effort on his part to be on the spot.”

After each interception, the Browns defense congregated in the end zone to take an imaginary picture.

“That is our form and our way of saying, yeah, I touched the ball, but this is all of us,” said Goodson, who recovered the fumble forced by cornerback Terrance Mitchell. “If the rush doesn’t get there, then I don’t get the pick. This is team ball.”

“It is beautiful,” running back Kareem Hunt said. “I want to run down there with those guys and celebrate.”