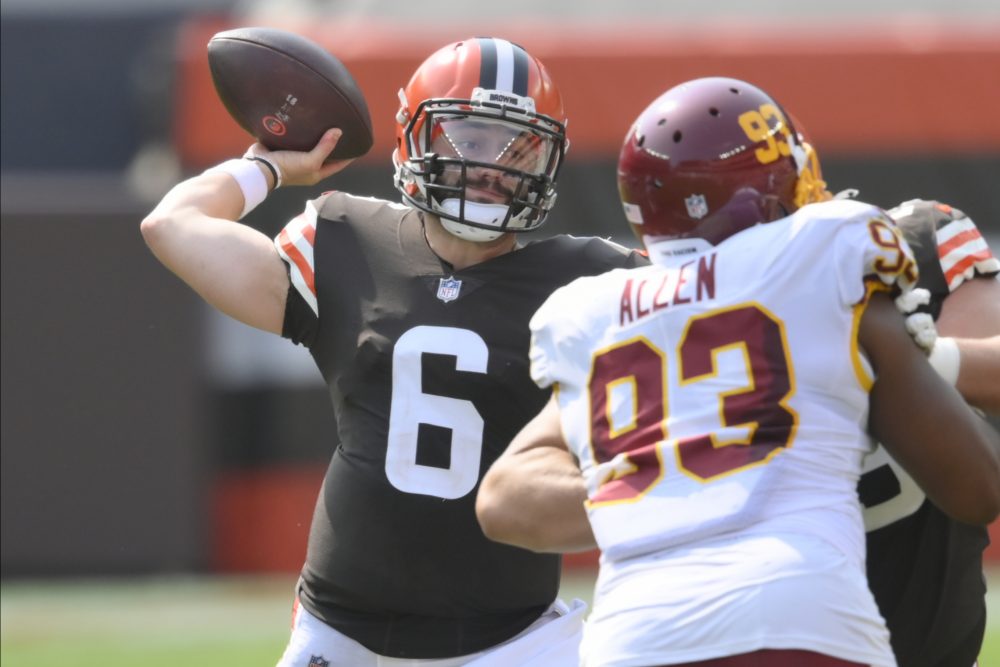 BEREA — Baker Mayfield was a part-time employee in the fourth quarter of the Browns’ back-to-back wins.

Sure, he was on the field for every offensive snap and did plenty of handing off to Nick Chubb and Kareem Hunt, but he threw only five passes in the combined 30 minutes. Both games were tightly contested and points were critical, and coach Kevin Stefanski turned to the powerful and effective rushing attack.

Stefanski might not have that luxury Sunday in Texas. The Dallas Cowboys, with weapons across the offense, scored 40 and 31 points in their last two games, and Mayfield might be asked to win a shootout against counterpart Dak Prescott.

Mayfield would embrace the chance as he returns to his home state.

“Dak is a great player. A tremendous amount of respect for him, the leader and the person he is,” Mayfield said Wednesday. “When it comes down to it, we are playing the Cowboys defense and we have to do whatever it takes to win. If that is a shootout, then great, and if it is another game where we have to control the clock, then we will do that. Whatever it takes to win.”

They were especially gashed through the air Sunday in a 38-31 loss to the Seahawks. Russell Wilson threw for five touchdowns and 315 yards.

Mayfield deflected when asked if he thinks the Browns can exploit the Cowboys for long completions to receivers Odell Beckham Jr. and Jarvis Landry.

“Whatever it takes to win,” he repeated. “If they have safeties down and we have one-on-one matchups, we are going to take those shots. But if they are going to take away that, then we need to be able to complete balls underneath and hand the ball off.”

The Browns defense ranks 24th (29.3) in scoring and the Cowboys have the top-ranked offense (490.7 yards a game), so Stefanski will likely try to minimize possessions by keeping the ball on the ground and taking time off the clock.

“They just need to finish each drive with seven in any which way you can do it,” Stefanski said.

Analysis: Browns’ good start is a positive sign — but it is only a start

After a rough opening performance that looked too much like last season — interception on the first drive, nervous feet in the pocket, 53.8 completion percentage — Mayfield settled down in the wins over the Bengals and Washington. He went 16-for-23 (69.6 percent) in each for a combined 375 yards, four touchdowns and an interception.

Mayfield likes how he’s distributed the ball, taken what the defense has given and gotten it to his plethora of playmakers. He wants to execute better when the big play presents itself.

“When we have our shot that we have drawn up and we have the right look, taking advantage of those opportunities,” he said, pointing to an underthrown deep ball Sunday in which Beckham had to come back to break up the interception. “The ball just came out of my hand funky. I would like to just put that ball on the back pylon and let him run up and make a play under it.

“He (also) had a shake route on the sideline and just kind of airmailed it and did not have my feet in the right spot.”

Mike McCarthy is in his first year with the Cowboys after taking a year off following 13 seasons coaching the Packers. He studied Mayfield last season and said he’s taken well to the new footwork and system he’s had to learn under Stefanski and coordinator Alex Van Pelt.

“He has adjusted very well,” McCarthy said on a conference call. “It is a system that is definitely quarterback-friendly, and he looks comfortable. I think the change in the footwork is serving him well. I think he is off to a very good start.”

Mayfield is from Austin and played at AT&T Stadium in Arlington while at the University of Oklahoma. He was asked if returning to Texas to play had special meaning.

“I will have plenty of people there — friends and family, loved ones and all those good people there — but I have to treat it like any other game and have to go do our job,” he said. “That screen is pretty breathtaking. It is an extremely nice facility. Up until I think the new L.A. stadium, it was the nicest one in the country. It is quite the facility.”

Mayfield grew up a Packers fan in the middle of Texas because of his admiration for Hall of Fame quarterback Brett Favre, but the only NFL game Mayfield attended as a fan was a playoff matchup vs. the Giants at Texas Stadium when Troy Aikman was quarterback for Dallas.

“My dad’s friend got us on the field, and I got to meet (Aikman) down there,” Mayfield said. “There are no pictures to prove it — that is a family internal issue.”