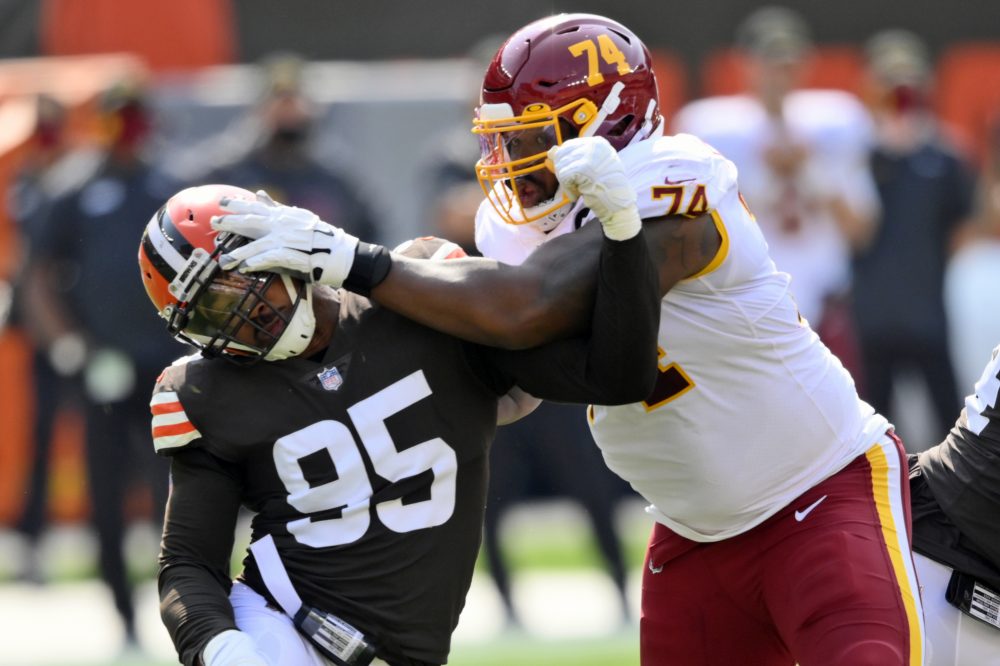 BEREA — Myles Garrett admires Muhammad Ali and uses his victory over George Foreman in The Rumble in the Jungle as inspiration to persevere through difficult workouts.

But Garrett won’t call his shot like the boxing legend.

Coming off consecutive games with pivotal strip-sacks that helped the Browns to a pair of wins, Garrett was asked what he envisions for Sunday in his trip home to face the Dallas Cowboys.

“Hopefully just more big plays. I am not Ali and I do not see the future, and I can’t call what round or what quarter,” the defensive end said Friday. “Just hoping that I make the plays that I am supposed to make … and hopefully creating takeaways for my team and giving us a chance to get a win.


“Cowboys stadium, you can make a name for yourself getting a big win there. They are America’s Team, and all eyes are on them almost every week. Going to make sure to put on a big showing.”

Not only is Garrett motivated to continue his streak of game-changing plays, keep the Browns (2-1) on their winning ways and strengthen his Defensive Player of the Year candidacy, he wants to show off for the hometown crowd. He was born and raised in Arlington, Texas, home of AT&T Stadium, where he thought he played once in high school and three times while at Texas A&M.

“Definitely going to have some family there,” Garrett said, as the Cowboys allow approximately 20,000 fans during the pandemic. “It would not be home for me if I did not have the family and friends there that I have known and grown up with.

“Given the opportunity to play in front of them, which is 10-15 minutes down the street, that is a blessing, and I hope to be able to come out of there with a win.”

The Browns (2-1) were favored to beat the Bengals and Washington at home but are 4 1/2-point underdogs against the Cowboys (1-2), whose losses came against the Rams (2-1) and Seahawks (3-0) and were decided in the closing seconds. The Cowboys have big-name talent across the roster.

Garrett agreed the matchup will be a litmus test for the Browns.

“We have to see where we are and who we are,” he said. “This will be a real test for us. They are better than their record right now. They are definitely a solid team with the weapons they have on offense and defense, and I feel the same way with us. We have to go out there and prove that we are a solid team, as well, and that we can bang and battle with anybody in the NFL.”

Garrett hadn’t been above .500 in his previous three seasons, as the Browns have their first winning record since December 2014. The bounce-back after the ugly opening loss has given the players confidence.

“Absolutely. We are in a spot that I have heard 100 times that we have not been in for six years,” Garrett said. “Guys are kind of hungry to keep the success going. We are definitely going to try to leave out of their place with an L (for the Cowboys), no matter what we have to do within the rules and just play hard and play physical and just attack them and pressure them and make them win it.”

Quarterback Baker Mayfield grew up in Austin and can relate to Garrett’s excitement.

“I know Myles knows what is on the line for us,” he said. “It is a huge one for us, and Myles is going to have opportunities to change the game for us. I know he is looking forward to doing it in front of friends and family, as well as I am.”

Odell Beckham Jr. ready for Cowboys game after episode with back; Kareem Hunt returns to practice, listed as questionable

Garrett has three sacks, two forced fumbles and two fumble recoveries this year. The 33.5 sacks in his first 40 games rank eighth in NFL history and are the most in franchise history.

Defensive tackle Larry Ogunjobi was drafted two rounds after Garrett was the No. 1 pick in 2017 and has watched his close friend continue to mature as a player.

“I feel like as we have all gotten older, there is this level of understanding that you have of the game and understanding your ability of what you can do to make game-changing plays,” he said. “I feel like he has really sunk into that role, and now he understands how big of a factor his is.”

Ogunjobi believes the six-game suspension to end 2019 gave Garrett the chance to step back and assess himself and his game.

“I feel like that time off really gave him time to reflect and understand he is a difference-maker, and whenever he wants to, he will be,” Ogunjobi said. “He is doing that. He is making plays. I am not surprised at all. I expect that from him. He does that all the time.”

The strip-sack of Cincinnati’s Joe Burrow came on a stunt to the outside after Garrett lined up inside. The strip of Washington’s Dwayne Haskins, which Garrett also recovered, came on a dip move around left tackle Geron Christian Sr.

NFL Network’s Brian Baldinger broke down the play on Twitter, gushing about Garrett’s ability to bend while keeping his feet and balance.

“They started talking about in college that I was able to have this bend that was unique,” Garrett said. “Actually AC, Adrian Clayborn, said something on Wednesday when I was bending the edge. He was like, ‘How the hell did you learn to do that?’ I was like, ‘I did not learn it. I just could do it.’

“It was not anything that I really practiced other than doing hoop drills and trying to bend the edge and run the corner. That is just how I was able to do it. That was just something I was blessed with.”

.@Browns @MylesLGarrett turns the corner like a FERRARRI at Monaco. No one else in the league can bend like this. Totally unique and so difficult to defend #DawgPound #Browns #BaldysBreakdowns pic.twitter.com/fLuWoJJuFj

While others at the same position fall down attempting the move, Garrett gets under the shoulder of the tackle and turns the corner like a sports car.

Impressive and inspirational: Larry Ogunjobi off to great start, determined to take game to next level in pivotal year
Silent assassin Nick Chubb doesn’t care about recognition (or sharing field with Ezekiel Elliott), but teammates want to make sure everyone knows he’s elite