Notes: Odell Beckham Jr. ready for Cowboys game after episode with back; Kareem Hunt returns to practice, listed as questionable 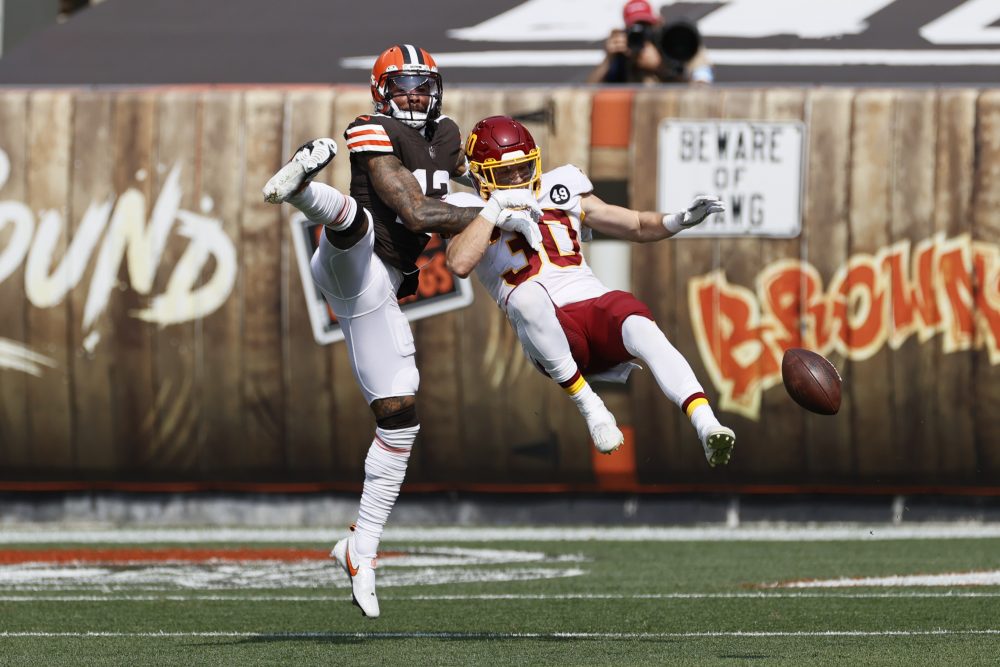 BEREA — The Browns had their full complement of offensive stars at practice Friday, as receiver Odell Beckham Jr. and running back Kareem Hunt were back running routes and going through drills.

Whether they have everyone available against the Cowboys will be finalized Sunday morning, but the progress was encouraging.

Beckham (back) was a full participant after being limited Thursday. Coach Kevin Stefanski said Beckham had an “episode” with the back but is “good to go” to face the Cowboys.

Hunt (groin) was limited after not practicing Wednesday or Thursday and listed as questionable on the official injury report. He participated in the individual drills during the portion of practice open to reporters and has been an excellent complement to starter Nick Chubb in the team’s 2-1 start.

“He looked pretty good. He is working through it,” Stefanski said. “We have to be mindful of what he can do, and we will see over the next couple of hours how he responds.”

Here’s #Browns WR Odell Beckham Jr. having some fun during a drill. He was limited yesterday with a sore back pic.twitter.com/QzDt85KOyf

Left guard Joel Bitonio (back) and cornerback Denzel Ward (groin) were also listed as questionable. They were limited for the second straight day after not practicing Wednesday.

“They are both pushing through it,” Stefanski said. “We limited their reps today. Kind of make the decision as we get down there.”

Cornerback Greedy Williams (shoulder) was ruled out for a fourth straight game after practicing on a limited basis for the second straight week.

“slow healing process all I can tell you,” Williams replied to someone on Twitter.

“I wish I could explain it in greater detail, other than to say he is doing a great job,” Stefanski said of the slow return for Williams, who was injured Aug. 24. “He is fighting his butt off to get out there. We are just trying to make sure we are making prudent decisions.”

The Browns could use Ward against Dallas’ top-rated passing attack (383.3 yards a game). He was able to start last week against Washington but didn’t play in the second half because of the groin.

“Denzel came in and fought, and that is something that I really give him a lot of credit for,” pass game coordinator/defensive backs coach Jeff Howard said. “I appreciated the effort that he came out and played with. I thought he played well for his time on the field.”

WAITING FOR A CHANCE

Receiver Rashard Higgins isn’t in the coaches’ doghouse, even though he was a healthy scratch against Washington and has one catch for 9 yards in two games.

“Rashard Higgins has been outstanding in all areas,” O’Shea said. “He has worked extremely hard. He is playing in multiple positions for us on the practice field. He has been very professional in everything that he has done with us.

“I know that the other players have respect for him. I am encouraged by Higgins. I am glad he is here, and I am glad I have the opportunity to coach him.”

Cowboys defensive end Aldon Smith leads the league with four sacks despite not playing the last four seasons after being suspended for a series of off-field incidents.

“It is very special,” Cowboys coach Mike McCarthy said on a conference call. “What he has done to get to this point and prepare himself for this opportunity is remarkable. I can’t say enough about him and what he has done on a daily basis. He has been a true pro, and he is an excellent fit for the environment and the program that we are building here.

“To top it all off, he has played extremely well in two of the three games. He is off to a great start.”

“He’s one of the best natural pass rushers the game has seen in a long time and as far as football, I’m glad to see him back doing those things because he has a lot of ability and he has a lot more instincts than most guys that come into the league,” Garrett said.

BOOST FOR THE ’BOYS

Cowboys left tackle Tyron Smith, a seven-time Pro Bowler, was listed as questionable and appears headed back this week after missing two games with a neck injury. He will likely battle Vernon and Garrett.

“I do not know that much about him. I know he is one of the best tackles in football,” Garrett said. “Him being healthy and being on the field, I do not think he would be out there unless he felt like he could do the job to the best of his ability. Knowing that, you have guys who are willing and hungry to have a shot at the guy who is at the top of the game right now. He has been one of the best for a while, and none of my guys are going to back down from the challenge and neither am I.”

** Cowboys rookie starting cornerback Trevon Diggs (shoulder/knee) was listed as questionable after being limited in practice the last two days.

O’Shea is proud of the role his receivers have played in the success of the run game, which ranks tied for third in the NFL with 170.3 yards a game.

“It should be an identity of our receivers here at the Browns is that we are going to commit to the running game and play very well with tremendous effort in that area,” he said. “Our guys have taken a lot of pride in it. At the receiver position, nothing shows your commitment more to the team and your willingness to help the team. I feel like our guys have done that.”

Stefanski declined to announce who will return kicks following the season-ending injury to JoJo Natson. Rookie receiver Donovan Peoples-Jones seems like the logical choice despite being a healthy scratch the first three games.

“We feel good about where we are going,” Stefanski said.

** McCarthy was a young assistant coach at the University of Pittsburgh when Browns offensive coordinator Alex Van Pelt was a quarterback, then McCarthy hired Van Pelt as an assistant coach for the Packers from 2012-17.

** Cowboys receivers coach Adam Henry was in the same role with the Browns the previous two seasons.