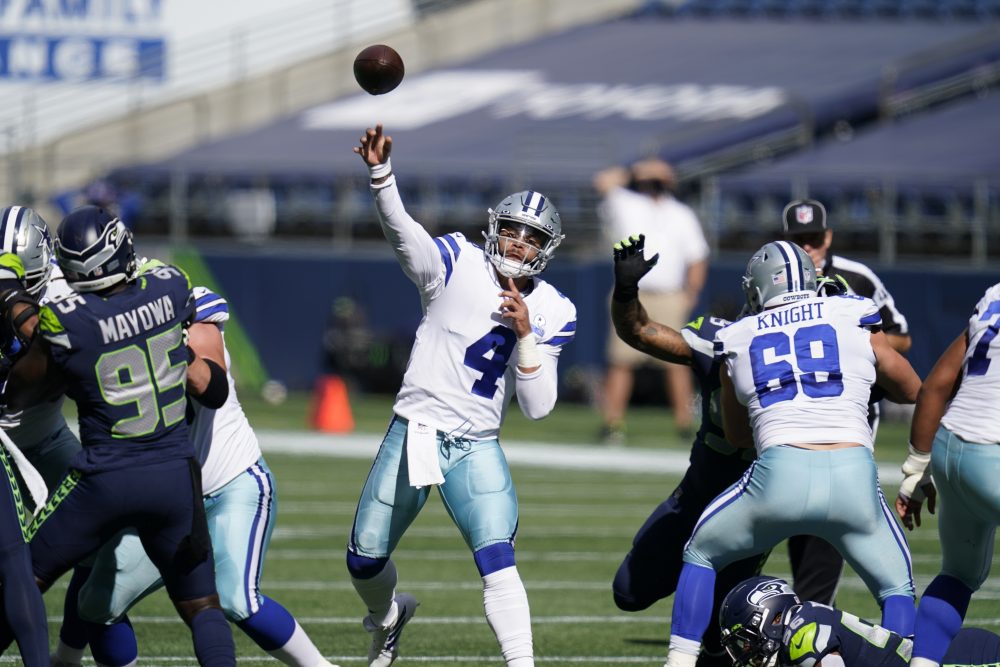 What are the Cowboys waiting for to sign quarterback Dak Prescott to a long-term contract extension? Not only has he vastly exceeded his draft status as a fourth-round pick in 2016 — a round after the Browns took Cody Kessler — he’s a two-time Pro Bowler off to a fantastic start. Prescott leads the league with 1,188 passing yards — 150 more than runner-up Josh Allen of Buffalo — after becoming the first Cowboys quarterback to throw for 400 yards in consecutive games. He has five touchdowns and two interceptions, both thrown last week in a loss to Seattle after going 291 passes without a pick.

“He is worth a lot to that team, and he has proven his worth day in and day out over there,” defensive end Myles Garrett said. “We have to make sure that we do not allow him to make those big plays that he is accustomed to making.”

Prescott is one of three players in NFL history with 100 touchdown passes and 20 touchdown runs in his first five seasons, joining Cam Newton and Jeff Garcia. He’s thrown 102 touchdowns and only 38 interceptions in his career.

“He is a very good operator,” Browns pass game coordinator/defensive backs coach Jeff Howard said. “He stands back there in the pocket and is able to deliver the ball to all parts of the field. It is not just inside the numbers. He is as good as anybody I have seen at throwing the ball to the field outside the numbers or to the boundary. He sees the picture very well, can decipher coverages and then puts the ball into tight spaces.”

Somebody’s got to catch all those Prescott passes, and the Cowboys have plenty of somebodies.

“CeeDee is extremely special,” said Baker Mayfield, his teammate at Oklahoma. “Just from the time when he stepped on campus as a true freshman, I knew he was going to be special. He just has that ‘it’ factor. It is something you can’t teach and can’t coach it. He is a dog when he steps on the field.”

Fans around the NFL may bristle at the notion, but playing the Cowboys is different than the average opponent. They have the America’s Team label, the state-of-the-art stadium, the classic uniforms and the history.

“They are America’s Team, and all eyes are on them almost every week,” Garrett said.

“Absolutely, it is amazing,” receiver Odell Beckham Jr. said. “It is just an incredible environment, a beautiful place. Always excited to be able to play there.”

“It is always like the mecca of games,” receiver Jarvis Landry said. “For me personally, it is a great opportunity in a prestigious stadium to go out there and make plays and bring back a W — my first regular-season victory there, too.”

Seasons for the Browns with two wins vs. NFC East opponents. They beat Washington last week.

Years since the Browns had scored 30 points in consecutive games. After 35 vs. Cincinnati and 34 vs. Washington, they’re looking for three straight with 30 for the first time since seven in a row in 1968.

Completions for Baker Mayfield, the most for a Browns quarterback in his first three seasons, passing Bernie Kosar’s 675.

The Browns and Cowboys are a lot alike: potent offenses, big-time running backs, defenses strong upfront but vulnerable in the backend. I’d be stunned if this isn’t a shootout, and I think Dak Prescott makes one more play than Baker Mayfield does. Cowboys 34, Browns 31.

Analysis: Browns’ good start is a positive sign — but it is only a start
Commentary: Buckle up, Browns fans, thrilling win over Cowboys a taste of what’s to come this season