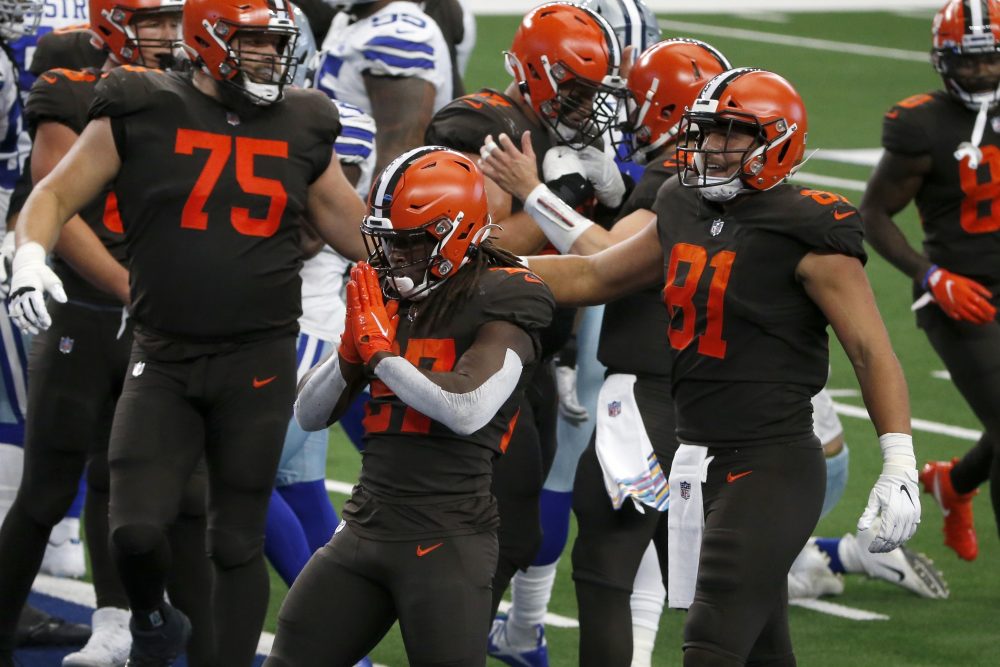 The huge plays came one after another, made mostly by the Browns’ biggest stars and led by receiver Odell Beckham Jr.

The running game, no matter who got the handoff, humiliated the Cowboys, finishing with 307 yards despite Pro Bowler Nick Chubb leaving in the first quarter with a knee injury.

The defense got enough stops, including three more takeaways.

The Browns dominated the Cowboys then hung on for a 49-38 win Sunday, taking advantage of the spotlight that comes with playing America’s Team at AT&T Stadium.

No one likes the bright lights more than Beckham, who saved the day to put an exclamation point on his best day in a Browns uniform. His 50-yard touchdown run on an end-around with 3:25 left allowed fans to relax after the Cowboys (1-3) had cut a 41-14 deficit to 41-38 with three touchdowns and three 2-point conversions in the fourth quarter.

Beckham also caught two touchdown passes, one from best friend and receiver Jarvis Landry and one from quarterback Baker Mayfield.

“It was a walk-off home run for me,” running back Kareem Hunt, who played through a groin injury to rush for 71 yards and two touchdowns, said of Beckham’s TD run. “There are not too many guys in the league that are better, if there even is. That’s a great receiver right there. I think he’s the best of the best.”

After one of their best performances in years — for at least the first three quarters — the Browns are undoubtedly different under first-time coach Kevin Stefanski.

They are 3-1 for the first time since 2001 under first-year coach Butch Davis.

They have scored 30 points in three straight games for the first time since 1968.

They have two wins vs. the NFC East for the first time in history.

They have made the ugly opening loss to the Ravens a distant memory with three straight wins.

The Browns also got a big win last year in Week 4, beat Baltimore 40-25? To improve to 2-2. The Ravens then won 12 straight while the Browns finished 6-10 and coach Freddie Kitchens was fired after one year on the job.

“This does not feel like last year one bit,” said Mayfield, who went 19-for-30 for 165 yards, two touchdowns, two sacks, no interceptions and a 100.0 passer rating. “We are going to continue to improve, and we are on to the second quarter of the year.”

The Browns continue to show the resilience that’s needed to win in the NFL.

They trailed 14-7 in the first quarter before going on a 34-0 run over the next two quarters. They lost Chubb, who’s the heart and soul of the team and arguably its best player, yet rushed for the most yardage the Cowboys have ever given up. Beckham’s run and cornerback Denzel Ward’s interception that followed were the plays required to prevent a historic collapse.

“I thought the guys fought their rear ends off for 60 minutes, and we needed all 60 minutes,” Stefanski said.

The fun started early, as Landry got the ball on a reverse, pulled up and threw a strike to Beckham in the corner of the end zone for a 37-yard touchdown. Landry’s got a great left arm, but that was his first touchdown pass in his 100th straight game to open his career.

Defensive end Myles Garrett, who was born and raised down the street in Arlington, also joined the party early. He sacked Dak Prescott on the second play and stripped him in the second quarter to give him a strip-sack in three straight games.

“He is doing a great job,” Stefanski said. “No. 95 is all over the field. He is giving us an honest day’s work every time he is out there, playing the run and playing the pass.

“Really happy for him to be able to do this in his hometown in front of some people who I am sure know him from growing up, friends and family. We are going to need him. He is our best player there. We expect a lot from him.”

The Cowboys changed right tackles, started chipping Garrett and went to a quick passing attack, slowing him down as they made their comeback. Prescott went 41-for-58 for 502 yards, four touchdowns, three sacks, an interception and a 112.9 rating. Receivers Amari Cooper (12 catches, 134 yards, TD) and rookie CeeDee Lamb (five, 79, two TDs) had big days.

The quick scores and successful 2-point conversions had Browns fans thinking the worst. But things turned out for the best.

Dontrell Hilliard, who was promoted from the practice squad this week and was part of the running back committee, recovered a squib kickoff and returned it to midfield. On the next play, Beckham got the handoff, avoided being dropped for a 14-yard loss by end Aldon Smith, turned up the field, cut back and was gone for a 50-yard touchdown.

Stephen Carlson recovered the blocked extra point in the end zone for a 2-point conversion and 49-38 lead.

“We can score points when we need to,” Mayfield said. “We are learning that we are efficient when we need to be. And we just have to be more consistent, I think that is the biggest takeaway from today. Yeah, we scored a lot of points, but we left a lot out there, and I truly believe that.”

The Browns scored their most points since 51 against the Bengals in 2007, the last time they finished with a winning record. The 31 points in the first half were the most since 1991. They won on the road for the first time since last year in Baltimore.

After a brutal debut, Stefanski is off to a wonderful start.

“I am proud of these guys for this first quarter of the season, being 3-1,” Mayfield said. “That speaks volumes to us after bouncing back after Week 1.”