Commentary: Buckle up, Browns fans, thrilling win over Cowboys a taste of what’s to come this season 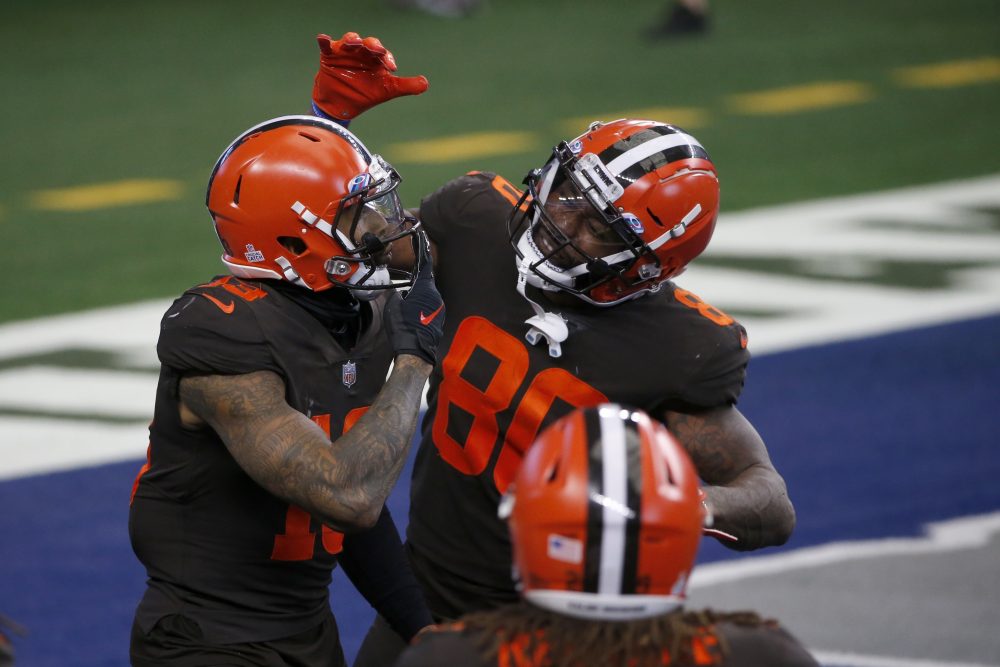 Get used to it. This could be a wild ride of a season.

It ended with the Browns trying to score one point and having to settle for two. A blocked extra-point attempt (don’t ask).

It ended with the Browns defense giving up 35 first downs, 566 total yards, 38 points, 24 in the fourth quarter — in a victory. On the road. Go figure.

It ended with Baker Mayfield throwing only one more touchdown pass than Jarvis Landry. It ended with Odell Beckham scoring three.

Nobody would pick up the phone.

Nick Chubb, arguably the Browns’ best player, missed most of the game with an injury, so D’Ernest Johnson, one of the Browns’ most anonymous players, came off the bench to rush for more yards (95) than the entire Cowboys team (85).

The game was half track meet, half tractor pull and wall-to-wall whoopie. It was pinball football. The Browns led 41-14, then all of a sudden it was 41-38.

But the Browns finally chain-sawed their way to a 49-38 victory, deep in the heart of Texas.

“The guys fought their rear ends off for all 60 minutes,” said Browns coach Kevin Stefanski, who all of a sudden has the Browns at 3-1, and a fan base that is rapidly falling in love.

The last time the Browns were 3-1 we were barely into this century. The year was 2001. Myles Garrett was 5 years old.

The Browns have also scored 30 points three games in a row. That last time they did that was 1968, when one of their quarterbacks was Frank Ryan, who is currently 84.

“Our offense, it’s pick your poison on who you want to defend,” said Mayfield, who has turned down the bravado and turned up the efficiency and maturity in the early going of this season. For the second consecutive game — and win — Mayfield was a solid game manager.

He completed 19 of 30 passes for a pedestrian 165 yards. But, for the second game in a row, he didn’t throw an interception. What he did best was hand the ball off to Browns running backs, a position group that is turning out to be much deeper, and bruising, than we thought.

Johnson came galloping into the fray after Chubb left with an injury, and before the Cowboys could even figure out who D’Ernest was, he had rushed for a game-high 95 yards, averaging a Chubbish 7.3 yards per carry.

Led by D’Ernest D’battering ram, the Browns rushed for a whopping 307 yards, and the injured Chubb barely contributed.

But that wasn’t even the Browns’ best stat of the day.

The best stat was this: no turnovers, and the Browns defense forced three turnovers by the Cowboys.

In their last two games the Browns have forced eight turnovers and committed none.

That’s a good recipe for victory, of which the Browns have three. The hard part is getting to the winner’s circle, and Sunday’s rodeo in Texas might be a preview of the remainder of the season.

The rapidly improving Browns appear to be in that tricky transition phase where they know they can be really good, but there are still some leaves in their gutter that can occasionally gum up the works.

There were stretches in Sunday’s game, after the Browns had shown they were good enough to build a big lead, when it was revealed that they are still learning how to chaperone the lead through the fourth quarter.

In the fourth quarter it got wild, and it got wild very fast. It went from 41-14 to 41-38 in a heartbeat, as the Browns’ exhausted defense absorbed a Dak attack. Cowboys quarterback Dak Prescott completed 41 of 58 passes for four touchdowns and 502 yards.

All of that didn’t come in the fourth quarter. It only felt like it did.

“We took our foot off the gas. We need to finish games,” said Mayfield.

“We knew he’s capable of doing that,” said Stefanski. “That’s an explosive offense, and he’s the trigger man. You’ve just got to find a way to make a play and get off the field.”

Stefanski’s team eventually did. But if you think this will be the last Wild West finish for the learning-how-good-they-can-be Browns, buckle your chin strap.

There’s a winning curve and a learning curve. For the Browns on Sunday, it was a two-horse race, and a photo finish.