Notes: Nick Chubb to have MRI after leaving game with knee injury 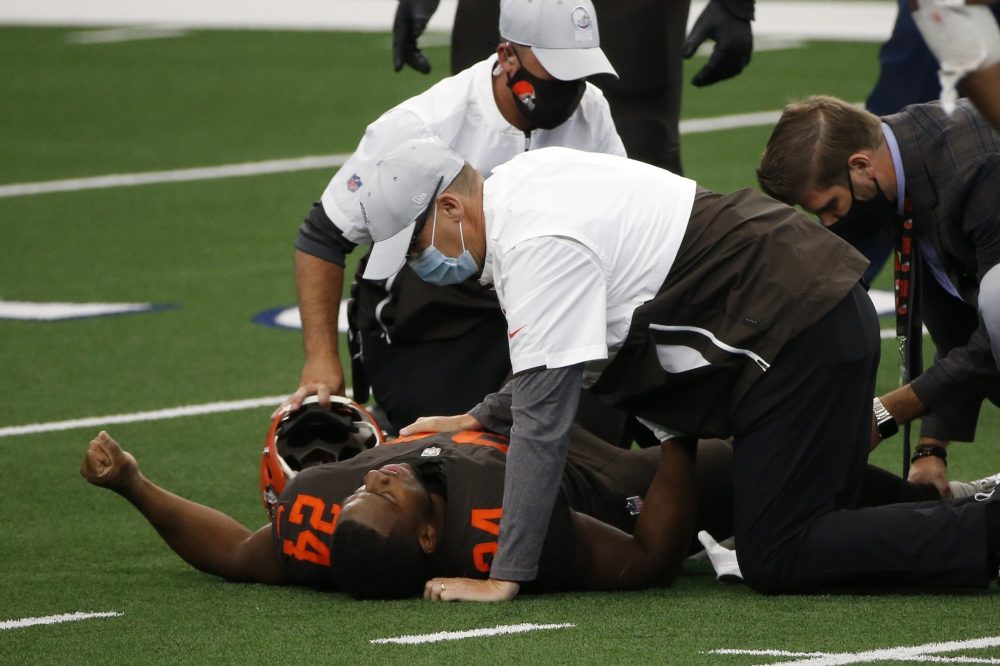 The Browns lost Pro Bowl running back Nick Chubb for the final three quarters with a right knee injury Sunday in the 49-38 win over the Cowboys in Arlington, Texas.

“Big prayers up for Chubbs right now,” receiver Odell Beckham Jr. said. “Any time you see your brother go down, it’s never a good feeling. I’m just praying that he gets healthy and we can have him back soon.”

Coach Kevin Stefanski didn’t have an update after the game, saying Chubb would have an MRI on Monday.

Chubb was injured with 59 seconds left in the first quarter. He stayed in to pass protect and was looking for someone to block on the left side when right guard Wyatt Teller was beat on the other side by defensive tackle Trysten Hill. Teller was called for holding for taking down Hill, who rolled into Chubb’s right leg.

Chubb, who suffered a serious left knee injury in 2015 while at the University of Georgia, grabbed his leg, took off his helmet and grimaced as he lay on the turf. He was eventually helped up, limped off the field — he flexed his knee a couple of times — and walked to the locker room.

Chubb was arguably the team’s best player last season, when he finished second in the league in rushing, and through three games and a quarter this year. He carried six times for 43 yards Sunday, bringing his season totals to 57 for 335, four touchdowns and a 5.9 average.

The Browns (3-1) missed Chubb but were able to rush 40 times for 307 yards and a 7.7 average against the Cowboys (1-3). Kareem Hunt, who played through a groin injury, carried 11 carries for 71 yards and two touchdowns. He and Chubb became the third set of running back teammates each with at least four touchdowns through four games in the Super Bowl era.

D’Ernest Johnson came off the bench for 95 yards on 13 carries, and Dontrell Hilliard added 19 yards on five carries in his first action of the year. They were career highs in yards for Johnson and Hilliard, and five Browns had a rush of at least 10 yards, including Beckham.

The Browns had never had three rushers gain 70 yards in a game.

“That’s my boy. I call him ‘Slow Grind’ because he takes it slow, and he’s always working hard,” Hunt said of Johnson, who entered with five rushes for 26 yards in his career. “He’s a hard worker, and he really deserves it. I was just happy for him. I told him we needed him.”

** Defensive tackle Larry Ogunjobi left with an oblique injury and will have an MRI. Defensive tackle Sheldon Richardson walked off late, but Stefanski didn’t mention him on the injury report.

** No. 3 receiver KhaDarel Hodge didn’t play after straining a hamstring during the pregame.

Commentary: Buckle up, Browns fans, thrilling win over Cowboys a taste of what’s to come this season

Defensive end Myles Garrett fired out of the gates, sacking Dak Prescott on the second play and adding a strip-sack in the second quarter that was recovered by end Olivier Vernon and led to the go-ahead touchdown. Garrett was born and raised in Arlington, just minutes from AT&T Stadium.

“It was a great feeling,” he said. “I had some family and friends at the game. I got to perform well in front of them and it was good to get a great team win.”

Garrett has five sacks in four games this year and 35.5 in 41 games for his career, tied for the fifth-best start in NFL history. He has 10 multisack games and a strip-sack in three straight.

“Once again, Myles makes a big-time play in a big moment,” Mayfield said. “I told him if he keeps getting one strip-sack a game, I’m not going to be mad at him. Myles once again changed the game for us.”

THE KING WEIGHS IN

Before LeBron James led the Lakers in Game 3 of the NBA Finals on Sunday night, he watched the battle between his favorite NFL teams. He tweeted about the big plays and mentioned Odell Beckham Jr., Jarvis Landry, Prescott and Hunt.

“We’re born and raised — Ohio,” said Hunt, who was born in Elyria. “That’s the GOAT right there. I’ve looked up to him since he was drafted to Cleveland.”

Hunt was joined by cornerback Denzel Ward in playing through groin injuries, and Ward secured the win with an interception at the Cleveland 4-yard line with 1:36 left. Ward injured the groin Sept. 24 in practice, started but didn’t play the second half last week against Washington and was limited in practice during Cowboys week.

“My man is tough, he’s shown that multiple times,” Garrett said. “Just like OBJ, he’s a playmaker, he’s a difference-maker. He’s been a big force before and he’s going to continue to. I’m proud of my guy.”

Left guard Joel Bitonio (back) started despite being limited during the week with a back injury and listed as questionable.

The plan was for Peoples-Jones to return punts and kickoffs, but he was also forced into action as the third wideout when Hodge was hurt in pregame. Peoples-Jones didn’t catch a pass but returned three kickoffs for 73 yards and one punt for 13 as the Browns played the whole game with only three healthy receivers.

Safety Andrew Sendejo was the game captain but struggled again. He was the closest defender on CeeDee Lamb’s 43-yard touchdown catch, was in single coverage on Lamb’s 5-yard touchdown and went for the hit rather than the breakup on Amari Cooper’s 20-yard touchdown on fourth-and-2.

** Tight end Austin Hooper caught his first touchdown with the Browns. He had five catches for 34 yards.