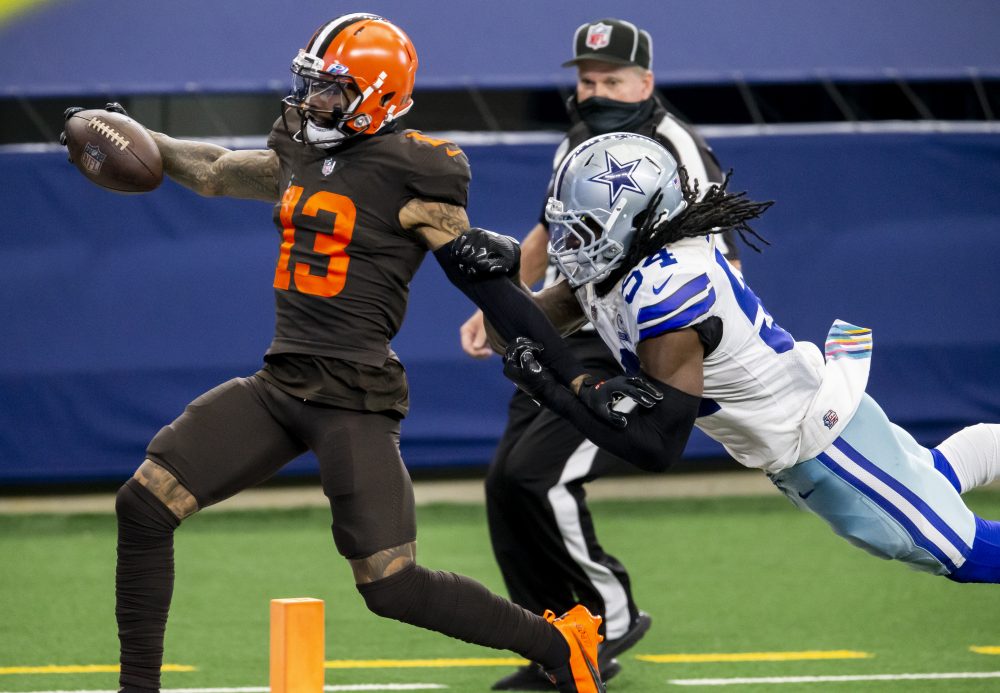 His first touchdown fulfilled a longtime dream. The final of his three scores stopped the Cowboys comeback, gave the Browns breathing room and took fans’ breath away.

Receiver Odell Beckham Jr. had another memorable day vs. Dallas and his best game in 20 with the Browns as he lifted Cleveland to a 49-38 win Sunday at AT&T Stadium in Arlington, Texas.

“He did what he is known for — he makes big plays,” said defensive end Myles Garrett, who had two sacks and forced a fumble. “That man is special, and we must be able to make big plays like that. That is what he is doing, and he is trending upwards in terms of productivity. When he is getting his name called, he is coming up big for us.”

Beckham played an important role in the first two parts of the three-game winning streak but busted loose against the Cowboys. He caught five passes for 81 yards and two touchdowns and rushed twice for 73 yards and a score.


The last touchdown shall be first because the Browns were reeling, having watched a 41-14 fourth-quarter lead dwindle to 41-38 with 3:47 left. The Browns took over at midfield after a squib kickoff, and coach Kevin Stefanski got a bit tricky.

Quarterback Baker Mayfield faked a handoff to Kareem Hunt up the middle and pitched to Beckham, who was coming from the left. Defensive end Aldon Smith was waiting, tried to drop Beckham for a 14-yard loss and missed. Beckham got up a head of steam, cut inside a bit, got a couple of blocks and sprinted past the defense for a 50-yard touchdown.

“It’s funny, Kareem before the play was like, ‘We just need 5 yards,’” Beckham said. “And Harrison Bryant, the rookie is giving me advice and coaching me up and telling me to stay inbounds. I said, ‘Thanks, rook.’ And I turned the corner and everybody was blocking and I just turned the jets on and found the end zone.”

“I told him, ‘Odell, look, get 5 yards, stay inbounds, slide or whatever, and I’m going to handle the rest,’” Hunt said. “I guess this one was greedy. He wanted the home run, not the base hit.”

The Browns would’ve been in deep trouble facing second-and-long if Beckham had been stopped in the backfield, and Stefanski would’ve been ripped. Instead, Beckham got the first rushing TD of his career and the longest in franchise history for a non-running back.

“We needed to move the rock there. We had not done a good job prior to that,” said Stefanski, who improved to 3-1 in his first time as a head coach. “It was a play we ran earlier in the ballgame. Figured we would come back to it. It did not look good to start and looked real good to end. Nice job by No. 13.”

Beckham matched a career high with the three touchdowns, including a 4-yard slant from Mayfield. He did it with the Giants in 2014 and ’15, his first two years in the league.

He and receiver Jarvis Landry have been close since they were teenagers in Louisiana then teammates at LSU. Beckham’s 50th career touchdown was a 37-yard catch of a pass from Landry, who got the ball on a reverse.

“Not that it’s not special to catch a touchdown pass from Baker or catch a touchdown pass in general, but literally as I watched Jarvis throw the ball, it reminded me of being outside of (the LSU apartments) as we would just sit there and talk for hours and throw back and forth. It felt like a joke, and not in a bad way. It just felt unreal to be looking him in his eyes and he’s just throwing it.

“I’m just smiling. Like I felt like he already has his finger up and I’m pointing at him. I wouldn’t trade that play for any amount of touchdowns in the game, or if I was the one to throw it to him. That’s my brother, like for real. For real life, I got his back forever, he’s got mine. It was an amazing feeling.”

That won’t go away anytime soon.

“These are moments we’ll look back on at 50, 60 years old as old men and be able to like really feel like fulfillment,” Beckham said. “That’s truly special. It goes down as one of my favorite plays in my entire career.”

Stefanski had been itching to call it, and Beckham said they score on it every time in practice.

“We have been repping that for a while, and it has been on that call sheet staring at me,” Stefanski said. “So I told those guys we were not going another week without that thing getting called. The guys were ready for it.”

Beckham, who played his first college and NFL games at Dallas, has 16 catches for 236 yards and three touchdowns this year.

“There’s just something about being in this atmosphere, this stadium,” he said. “All I can say is that it’s tatted on my neck, ‘I am who I am.’ I haven’t stopped being that. Last year was an injury, and this year I feel good.

“I just want to be able to help. This game — I get choked up about it because it means that much to me. I put my heart and my soul into this. That’s why you see the emotions on my sleeve. It’s because I care that much.”