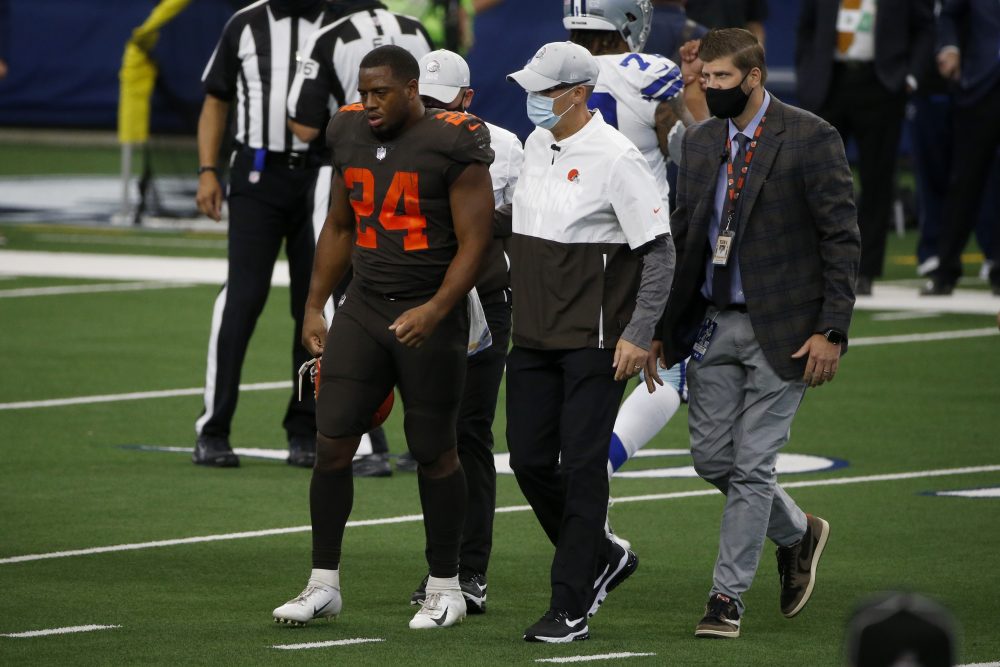 If the Browns are going to continue their hot start and make a run at their first playoff appearance since 2002, they will need to survive a stretch without one of their most effective, consistent and hardest-working players.

Running back Nick Chubb will miss “several weeks” with a sprained medial collateral ligament in his right knee. He was injured late in the first quarter Sunday in the 49-38 victory over the Cowboys that extended the winning streak to three games and improved the record to 3-1 for the first time since 2001.

Coach Kevin Stefanski wouldn’t place a definitive timetable on Chubb’s return but said he wouldn’t need surgery and is expected back this season. He was placed on injured reserve, which mandates he miss at least three games.

NFL Network and ESPN reported the belief is he’ll miss about six weeks. So he’ll likely be out at least through the bye week Nov. 8, which comes after the Browns’ eighth game.

“With Nick Chubb, I hesitate to put a number of weeks on it,” Stefanski said Monday. “I don’t know, but it will be several weeks. Knowing Nick he will work his butt off to get back.”

“Thanks for all the prayers and wishes,” he posted. “I’ll be back soon enough. To the bat cave until then”

Thanks for all the prayers and wishes. I’ll be back soon enough. To the bat cave until then 🦇✌🏾

D’Ernest Johnson is the team’s No. 3 back and came off the bench to lead the way with 13 carries for 95 yards Sunday. He entered the game with five carries for 26 yards in a year-plus in the league.

“It is a tough loss,” he said of Chubb. “Playing behind a guy like that and just seeing how hard he works throughout this whole process, it is tough. I hate that it happened for him because he is just a great, humble dude. He does not say much, but he is all about his work.

“He is one of the best backs in the league, and he carries himself like that. At the same time, we just have to continue to hold it down for the running back room.”

Chubb finished last season second in the NFL with 1,494 rushing yards, and his teammates wanted to get him the title this year. He was off to a great start with 335 yards — second to Minnesota’s Dalvin Cook — a 5.9 average and four touchdowns through 13 quarters, before Cowboys defensive tackle Trysten Hill inadvertently rolled into his leg as Chubb was pass protecting.

The rushing title is off the table for 2020, but the Browns will remain committed to the ground game in his absence. They rushed for 307 yards against the Cowboys and lead the league in rushing yards (818), yards per carry (5.88) and rushing touchdowns (eight).

Not only do they have a strong scheme and efficient line, they have a second No. 1 back in Kareem Hunt, who led the league with 1,327 rushing yards as a rookie with the Chiefs in 2017. He played through a groin injury Sunday to rush 11 times for 71 yards and two touchdowns.

“He came through pretty good,” Stefanski said. “That dude is a warrior. I love watching that guy play. To make it to that game and to perform how he did, a team player all the way. Really, really proud of him.”

With Hunt not up to a full workload, Johnson and Dontrell Hilliard saw their first extensive action of the year. All four running backs and receiver Odell Beckham Jr. had at least one rush of 10 yards, which provides hope the system can succeed even without Chubb’s power, speed and tenacity.

“That was good to see with those guys stepping up,” said Stefanski, who also credits veteran line coach Bill Callahan for the strong run game. “The offensive line, the tight ends and the wide receivers, they are all straining, and the runners were running through arm tackles and breaking tackles so that was good to see.

“Nick is tough to replace obviously, but we have to just make sure we put a game plan together today and tomorrow with the coaches and then find a way to move the rock any which way we can. I trust that we will put that plan together and I trust that guys will step up when they are called upon.”

Johnson is confident the Browns can still capture the team rushing title.

“I truly believe we have the backs to do that,” he said. “We just have to attack every day and outwork our opponents, and then let everything come to us. We just have to work and go get it. I feel like we can do that.”

Stefanski said the organization will decide this week if a fourth running back is needed for the game Sunday against the Colts, who have the top-ranked scoring defense and fourth-ranked run defense.

The news could’ve been worse. If Chubb’s anterior cruciate ligament had torn, he would’ve been done for the year. And it was the right knee, rather than Chubb’s left knee that was seriously injured in 2015 while at the University of Georgia.

“Yes, I would say there is always relief when it is not a season-ending injury,” Stefanski said. “Nick does not say much as you guys know, but he is a leader of this football team. His teammates really respond to him and the way he goes about his business. He is disappointed, but I can promise you he is going to attack this rehab.”