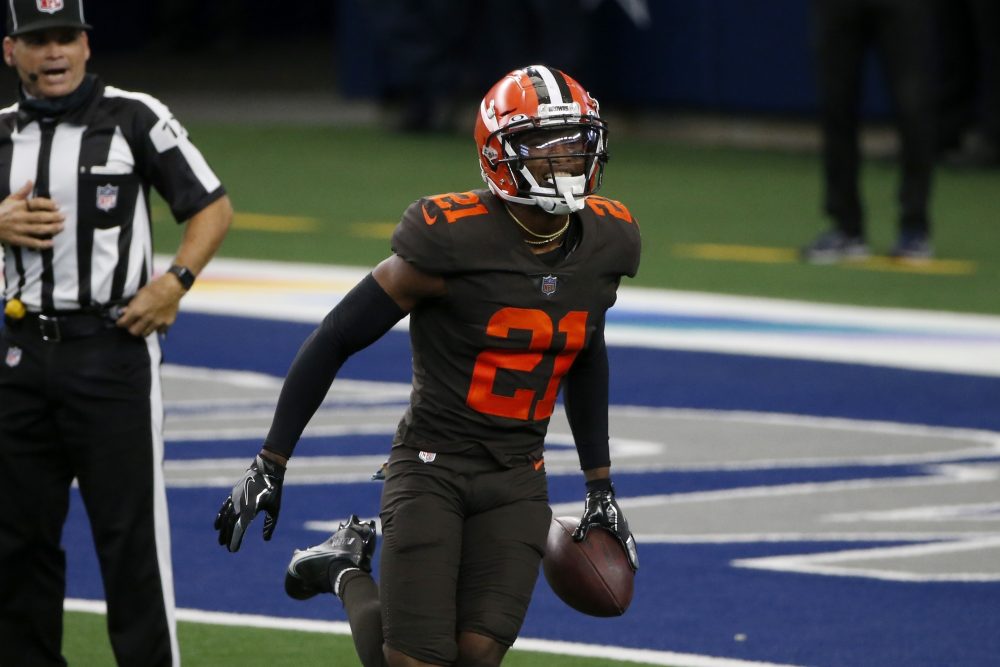 Cornerback Denzel Ward played all 82 defensive snaps Sunday and secured the 49-38 victory over the Cowboys with an interception at the 4-yard line with 1:36 left.

Not bad for someone who missed practice time the last two weeks, sat out the second half against Washington on Sept. 27 and was listed as questionable for the Cowboys game with a groin injury.

Ward was asked if his mentality is to play through the discomfort and not acknowledge it while on the field. He had four solo tackles and two passes defensed.

“No, I feel great,” he said. “If I am out there, then I am pretty sure that I feel good. I am able to still run, cut and do everything I need to do.

“These off days, I felt more hurt than the usual and just the soreness from the game and everything, but I am out there pushing through it with all those guys. Everybody has something that is nicked up and bruised up so we are all fighting and doing what we can to help this team.”

“For him to fight through the injuries that he has been fighting through, to answer the bell and then play the way he is playing and make that play at the end there to seal the game I thought was outstanding,” he said.

Ward’s interception was his first of the year and the defense’s eighth takeaway in the last two games. They’ve helped save the defense, which still ranks tied for 27th in scoring at 31.5 points a game.

“We still have to clean up other areas, but that is definitely the focus going into every game is getting takeaways and getting our offense out there to have more opportunities to make plays and score touchdowns,” Ward said.

The Browns have won three straight and are 3-1 for the first time since 2001.

“This team can be special,” Ward said. “It could be as special as we want to be. It is up to us.

“I just feel it is a totally different team compared to last year or years past I have been here, just the coaching staff, the players and everything. We are just trying to take it a game at a time, take it from there and not look too far ahead.”

Receiver Odell Beckham Jr. caught a touchdown on the Browns’ fourth play and took an end-around 23 yards before the first quarter was over. He finished with five catches for 81 yards and two touchdowns and two rushes for 73 yards and a touchdown.

“He is a really good football player so it makes sense to me to get him involved early and often,” Stefanski said. “It has not happened there in a few of those ballgames and there are always varying reasons for that, but he is a major part of our attack and we have to make sure that we are utilizing him as best we can.”

The 50-yard end-around for a touchdown in the fourth quarter stopped the Cowboys’ comeback, but Beckham was nearly dropped for a 14-yard loss.

“I try to just think about the process of what got us there because you are right, if he gets tackled, it is a dumb call. ‘What am I thinking?’” Stefanski said. “At the end of the day, I trust our guys and I trust the players, and that is really where my focus goes.”

STAND BY YOUR MAN

Safety Andrew Sendejo shouldn’t search his name on Twitter, as he was the object of much criticism for his play Sunday. But the coaches played him all 82 snaps after naming him the game captain.

Sendejo forced a fumble of running back Ezekiel Elliott but he also was the closest defender on CeeDee Lamb’s 43-yard touchdown catch, in single coverage on Lamb’s 5-yard touchdown and went for the hit rather than the breakup on Amari Cooper’s 20-yard touchdown on fourth-and-2.

“Playing hard. He is making plays on the ball,” Stefanski said. “He punched that ball out of the runner there yesterday. He can clean things up, just like the whole lot of guys honestly.”

The NFL held a virtual meeting with general managers and coaches Monday to reiterate the need to follow coronavirus protocols and reprimand organizations that have been lax. The Titans-Steelers game Sunday was rescheduled for later in the year after Tennessee had an outbreak, and the Chiefs-Patriots game was moved from Sunday to Monday because a player on each team tested positive.

“We are following those protocols to a T,” Stefanski said. “We probably met a little bit more virtually as a coaching staff with the recent news, but we are just going to do everything we can to be safe, keep our players safe and keep our staff safe.”

Commissioner Roger Goodell sent a memo to teams Monday that said protocol violations that result in virus spread and changes to the schedule will bring financial and competitive discipline, including loss of draft picks or even forfeiting a game.

“Our coaching staff and Coach Stefanski does a great job of just keeping us aware that the virus is still out there,” said Ward, who wore a mask on the Zoom call. “We have to continue to wear a mask and continue to stay safe if we want to have a season. I know all of us on the Browns, we want to play football, and if wearing our masks is what we have to do to keep that going, that is what we are going to do.”

Defensive tackle Larry Ogunjobi left the game with an oblique injury and didn’t return. Stefanski said he’ll be monitored throughout the week.

** Receiver KhaDarel Hodge is week to week after straining a hamstring during pregame.

** Defensive tackle Sheldon Richardson is fine after walking off the field late in the game late, according to Stefanski.

** Tight end David Njoku is expected to come off injured reserve this week after missing three games with a knee injury.

Donovan Peoples-Jones’ NFL debut almost turned into a disaster. Peoples-Jones, a sixth-round pick out of Michigan in April, served as the kick and punt returner and No. 3 receiver after being a healthy inactive the first three games.

He handled the duties admirably, especially after being forced into the third wideout role when Hodge was sidelined, until a kickoff in the fourth quarter. It was squibbed, he didn’t field it at the 22-yard line and let it roll. It remained a live ball until, luckily for the Browns, it tumbled across the goal line for a touchback.

“I do not know,” Stefanski said when asked what happened. “I was running down the sideline. He needs to make sure he makes great decisions there.

“He did a nice job yesterday for us and he is going to continue to do a nice job for us, but that is one that I would like to make sure is going in the end zone for him to be like that.”

Peoples-Jones returned three kickoffs for 73 yards and a punt for 13. He was called for holding on a running play.

Safety Sheldrick Redwine spoke to the Cleveland Bombers Youth Football program via Zoom on Monday night, then informed the group 88 pairs of Nike cleats would be given to them by the Browns, his Gloria Redwine Foundation and Nike. The Bombers are members of the Midwest Youth Elite Football Conference, which services Lorain, Richmond Heights, Cleveland and surrounding areas.

** Receiver Jarvis Landry had five catches for 48 yards, and four of the catches went for first downs.

** Nickelback Tavierre Thomas had five special teams tackles, tied for the most in a game in the NFL since 2018.