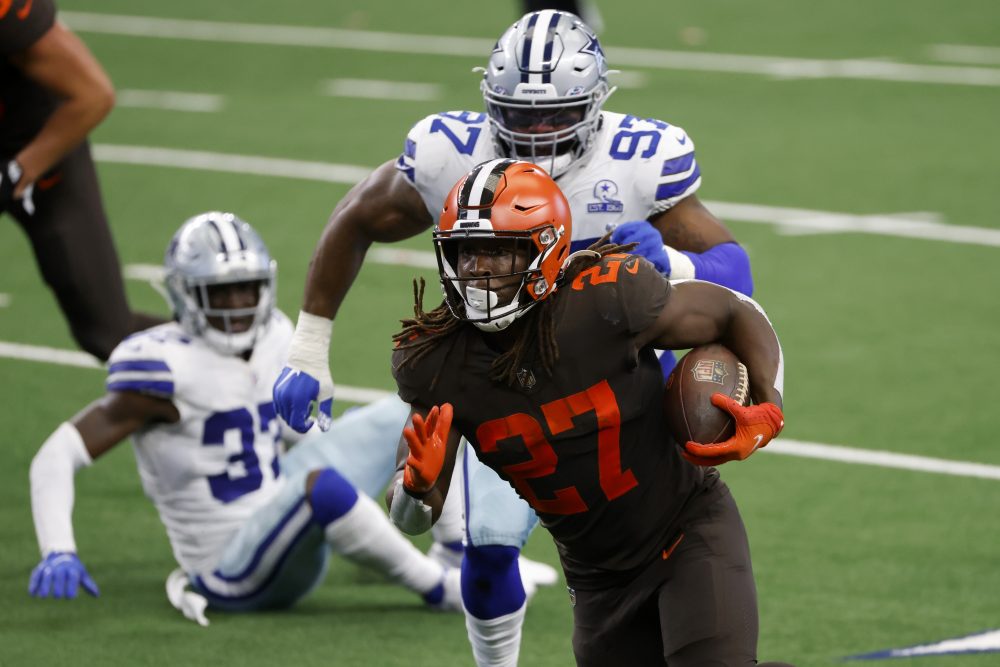 BEREA — Kareem Hunt has walked in Nick Chubb’s shoes before.

In fact, he wore them first.

Hunt was the workhorse with the Chiefs as a rookie in 2017, winning the NFL rushing title with 1,327 yards. He was the guy opponents game-planned to stop. And the person teammates looked to in the huddle to lead the way.

Hunt’s career and life took a massive detour in 2018 after multiple off-field altercations, but he was given a second chance by the Browns, found a home in his hometown and says he’s ready to step in for Chubb, who will miss several weeks after suffering a medical collateral ligament injury Sunday in the 49-38 win over the Cowboys.


Chubb, the No. 35 pick in 2018, finished second in the NFL last year with 1,494 rushing yards, ranks second this year with 335 and had become the face of a star-studded offense.

“Very tough to lose a guy like Nick, a brother and a great teammate and great player,” Hunt said Wednesday before practice. “But right now, we have to move next man up, and the other running backs, we all have to carry the load until we can get him back.”

The Browns are well aware of the luxury they have in Hunt as the No. 2. Now he gets the chance to be a No. 1 back again.

“Kareem — I have said it multiple times — is a top back in the league,” quarterback Baker Mayfield said. “We are blessed to have both of those guys.”

Hunt was limited in practice Wednesday with a groin injury that limited him to 11 carries and no catches against the Cowboys despite Chubb leaving in the last minute of the first quarter. He said he’s “feeling good” and will be “ready to go” Sunday when the Colts visit FirstEnergy Stadium for a battle of 3-1 teams.

Chubb and Hunt combined for 36.5 touches a game in the wins over Cincinnati and Washington, which is a lot to place all on Hunt’s shoulders. In four games, he has 50 carries for 275 yards and three touchdowns and eight catches for 42 yards and two touchdowns.

“I believe I can take on the workload, but honestly it is not bad because I trust in those other guys too, Dontrell (Hilliard) and D’Ernest Johnson,” Hunt said. “So if I ever need a break, I know they will come in and do a great job.”

But Hunt is prepared to carry the running game while Chubb rehabs.

“Most definitely. I am willing to do whatever it takes to help the team win,” he said. “If that means getting more carries, then I am fine with that, too.”

Hunt also challenged Johnson and Hilliard, who filled in nicely against the Cowboys with 13 carries for 95 yards and five for 19, respectively.

“I am just letting the other running backs know that we have some big shoes to fill,” Hunt said. “We have to keep it rolling, no drop-off. That is the biggest thing.”

“They understand what is at stake,” said coach Kevin Stefanski, adding he wouldn’t have to tweak the scheme without Chubb. “I really think we have guys that understand the scheme, guys that can contribute in the run and the pass. I am really excited for those guys.”

The Chubb-Hunt tandem is special for a number of reasons. One is the drastic contrast in personalities. With a larger role will come an even louder voice.

“Kareem was already a very vocal guy,” Mayfield said. “It is just him and Nick are very opposite in that way. It is a very thunder and lightning approach.

“Yeah, I see Kareem being more vocal as this goes on, but that is nothing new to him. He is not changing. He is not going to overcompensate and try and do too much. He understands that. He is a great teammate. He is just going to be himself, and that is somebody that brings energy every day and talks his trash but backs it up, and we are happy to have him.”

“They have some great players on that side of the ball,” Hunt said. “Some big, physical guys. Some guys who can run. Just have to come ready to play. They are going to give it their best shot.”

“Obviously, he runs hard,” he said on a conference call. “He runs with confidence. He has tremendous balance and vision. Ultimate respect for him. He is a big-time playmaker in this league.”

Hunt was cut by the Chiefs in November 2018 when video surfaced of him kicking and shoving a woman at a Cleveland hotel. The Browns signed him in February 2019 and he was suspended by the NFL for the first eight games.

In September he signed a two-year, $13.25 million extension through 2022 and believes he’s not only become a better person but a better player.

“I would just say I learned a lot more,” he said. “More experienced. More relaxed. Just being around the game and being able to play up to the speed, it has slowed down a little bit more since then.”

And he’s learned from Chubb.

“I am a lot better because Nick Chubb is a great back,” Hunt said. “There are some things that I take from his game and some things he can take from mine. We learn from each other and give each other ideas of ways we could have gotten more yards or something out of the run. We both try to help each other out.”