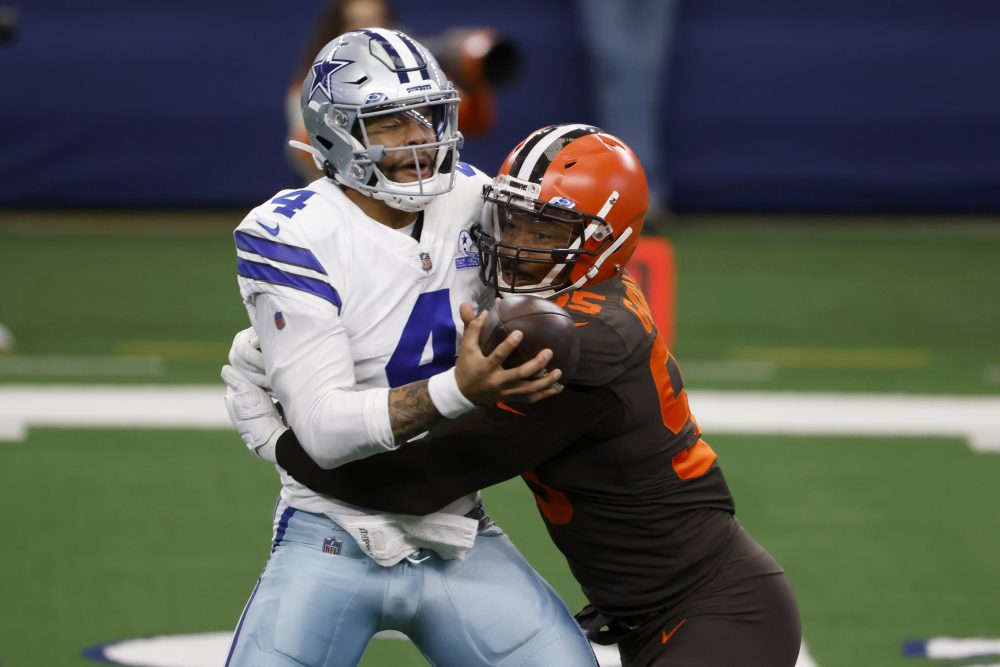 The defensive end was named AFC Defensive Player of the Week on Wednesday for his performance Sunday in the Browns’ 49-38 win over the Dallas Cowboys. Garrett grew up minutes from AT&T Stadium.

He had two sacks, three tackles and a forced fumble — his third straight game with a strip-sack. He also had eight pressures, according to Pro Football Focus, which has graded him tops among NFL edge defenders through four games.

It’s the first league award in his four-year career.

“He is a tremendous player, both run and the pass,” Colts coach Frank Reich said on a conference call. “As far as a pass rush, he has get-off, he has the knee bend and instincts getting to the ball. He has that knack about getting the ball out and getting strip-sacks.

“He is not just a one-dimensional player. He can play the run and the pass. You have to account for him. You have to know where he is. He certainly is a big-time playmaker for them.”

The Browns have won three straight to improve to 3-1 for the first time since 2001. They lead the league with 10 takeaways and a plus-six turnover margin.

Linebacker Joe Schobert was the previous Browns defender to win the award, in Week 12 last year. Kenard Lang in Week 1 of 2004 was the team’s last defensive end honored.

Mayfield said after the game he doesn’t care that it’s been 19 years since the Browns started 3-1. Since he was drafted No. 1 in 2018 he’s tried to keep the team’s two decades of losing in the past.

“I was not here for all that. I was here to change it, and that is what I am doing,” he said Wednesday. “I am not worried about the negative. I am only worried about getting better, improving and pushing this franchise forward.”

Reich is a big fan of Browns general manager Andrew Berry after working together years ago with the Colts.

“I know Andrew Berry and have a ton of respect for Andrew personally and professionally,” he said. “I was working with the quarterbacks at the time, and he would always give us evaluations on the opposing team’s defense. I could just tell this guy was a rising star. I think the Browns organization with Coach (Kevin) Stefanski and Andrew Berry is in really good hands.”

Tight end David Njoku was designated for return from injured reserve and practiced. He had been out since injuring his knee in the 38-6 opening loss to the Ravens.

The team has three weeks to activate him but is expected to do so before the Colts visit FirstEnergy Stadium on Sunday. It has an open spot on the 53-man roster.

“I am completely healed so I am really excited to finally get back on the field, hang with my teammates and have some fun,” Njoku said.

He had three catches for 50 yards and a touchdown in the opener.

“David brings his own skill set to the group,” Stefanski said of the tight ends. “I think all of them are a little bit different, but David with his size and his ability to be in line and split out, we are excited to get him back out there.”

** Receiver Taywan Taylor was signed off the practice squad to the active roster.

No. 3 receiver KhaDarel Hodge was placed on IR on Tuesday with a hamstring injury suffered Sunday in pregame. Taylor gives the Browns five active wideouts.

Taylor was initially acquired in a trade with Tennessee last season. He was a third-round pick in 2017 and has 10 starts in 32 games with 53 catches, 697 yards and two touchdowns.

Defensive tackles Larry Ogunjobi (abdomen) and Sheldon Richardson didn’t practice, working on the side with athletic trainers. Stefanski said they’ll be monitored during the week to see if they can play vs. the Colts.

Rookie third-round pick Jordan Elliott has served as the third tackle in the first four games and has three tackles. He would start if Ogunjobi can’t.

“He has done a nice job and need him to continue to progress,” Stefanski said. “His role will expand. He is very, very diligent about this. He wants to be great. He works really hard out at practice. He just needs to keep progressing.”

If necessary, the Browns could promote Joey Ivie from the practice squad.

With more positive coronavirus tests coming in for the Titans and Patriots, Mayfield said the Browns players are being more vigilant about following the protocols. He said he hasn’t had to change his lifestyle.

“Not much is different for me,” he said. “Still staying inside and not going out to restaurants too much. Just kind of sticking to my business.

“To me, it is not that damn hard. Just wear your masks. We all want to play football. Everybody has to do it. Just do it.”

Dallas claimed tackle Greg Senat off Cleveland’s practice squad. The Browns had been protecting him from being poached during game weeks, but the Cowboys signed him during the window this week before the Browns could protect him.

** The Browns will host their annual cancer awareness game Sunday as part of the NFL’s “Crucial Catch: Intercept Cancer” campaign.

The team will honor cancer survivors, patients receiving treatment and loved ones on the videoboards throughout the day.