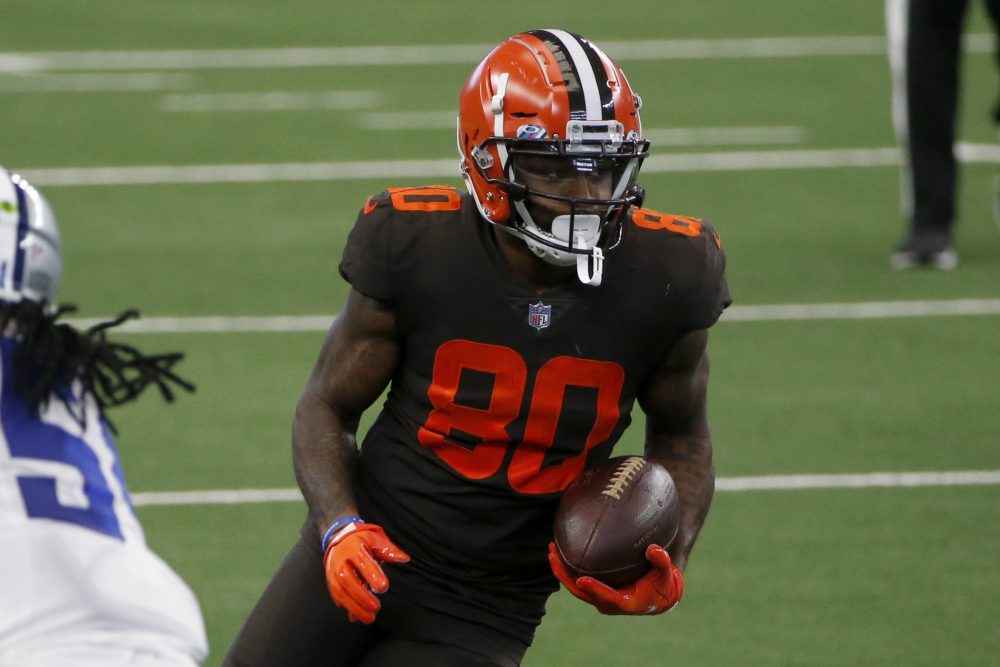 BEREA — Jarvis Landry got emotional a couple of times Sunday during the 49-38 win over the Cowboys.

The first event was easy to identify: his 37-yard touchdown pass to fellow receiver and best friend Odell Beckham Jr. in Landry’s 100th straight game to open his career.

The second occasion seemed mundane but meant a lot: a field goal drive that used the final 3:53 of the first half.

“I remember Austin Hooper catching a pass, and I caught a pass on third down right before we clocked it,” Landry said Thursday. “Just the operation of how that whole sequence happened and then Cody Parkey comes on and makes the field goal.”

Landry turned to pass game coordinator/receivers coach Chad O’Shea and quarterback Baker Mayfield on the sideline to note the significance.

“I say, ‘We just took a step in the right direction,’” Landry said. “I can remember being here for the last two years, and we would do all of these things and then we would miss the kick or something would happen right before we get into field goal range or a penalty would happen or something happened that kind of stops us.

“We had the sequence of plays and then we kick the field goal, and I felt the step being taken as a football team — I am getting chills right now — to be able to be where we want to be because that is what we have to do. We have to be able to score those points right before half and then come out after half and score. That is a 10-point swing right there. That is a beautiful thing in this game.”

Coach Kevin Stefanski also appreciated the drive, counting it as the first two-minute drive of the season.

The perfect throw to Beckham also stuck with Landry.

“It is actually feeling better today. I am not lying to you guys, I literally had like two of the worst days of my life with my lat,” he said. “It was sore as hell.

“It is very special and different just going back from all the times that our friendship and brotherhood has been together with each other and having history made on that play together is something that is crazy. You can’t even put it into words.”

Beckham can also sling it, so there’s a chance their roles could be reversed.

“Of course, that is always the dream, but it is really whatever is in the play calls and whatever we have in the game plan,” Beckham said.

Stronger, faster, healthier Odell Beckham Jr. reminds everyone of his greatness with huge game vs. Cowboys

Rookie Donovan Peoples-Jones was a last-minute replacement as the No. 3 receiver vs. the Cowboys after KhaDarel Hodge strained a hamstring during pregame. Peoples-Jones will likely share the spot with Rashard Higgins on Sunday against the Colts. Higgins has been a healthy inactive the last two weeks.

“It is going to be a little bit by committee,” coordinator Alex Van Pelt said. “Those guys will come in and split time and try to fill that void right now.”

Peoples-Jones (6-foot-2, 204 pounds) wasn’t thrown to but made his presence felt as a blocker in the run game.

“He got somebody on the ground on that very first play,” Stefanski said. “He is plenty big and plenty strong so that has to be a part of his game.”

Peoples-Jones also returned punts and kickoffs in his first NFL action and is expected to keep the job. Coordinator Mike Priefer said he “handled it like a pro” but should tweak what he did on a squib kickoff in the fourth quarter that barely reached the end zone for a touchback.

“I thought he handled the situation correctly. He did not touch the ball,” Priefer said. “I would like him to follow the ball a little bit closer down towards the end zone to make sure it goes in the end zone.”

Cornerback Greedy Williams (shoulder) may make his season debut this week. He returned to practice three weeks ago, has been limited every session and inactive on gameday. Stefanski acknowledged the recovery has taken longer than expected.

“Yeah, I would say I am hoping for Greedy,” Stefanski said. “We just have to make sure we are being smart and listen to the medical professionals, but I can promise you, he wants to be back out there very, very badly and he is working very hard to do that.”

** Defensive tackle Larry Ogunjobi (abdomen) and linebacker/special teamer Tae Davis (elbow) were out again and worked on the side.

** Safety Karl Joseph (hamstring) was added to the injury report and limited.

** Beckham (toe) and running back Kareem Hunt (groin) were limited for the second straight day.

** Defensive coordinator Joe Woods said linebacker Mack Wilson (knee) still isn’t 100 percent but getting stronger every week. He’ll continue to play mostly in the base defense as the coaches evaluate his usage in the nickel package.

Woods removed all blame from free safety Andrew Sendejo for the 43-yard touchdown pass down the middle from Dak Prescott to CeeDee Lamb in the first quarter. Sendejo wound up being the closest defender.

“His play was on No. 2 on the out cut,” Woods said. “We busted that coverage extremely bad. He was not responsible for that first long touchdown whatsoever.”

Sendejo has been involved in allowing other touchdowns and big plays but was on the field for every snap against the Cowboys.

“He is an aggressive player,” Woods said. “The thing he is going to give you is he is going to play 100 miles an hour all of the time. My conversation with him is always just play within yourself.

“He has really been an asset for us because he gets everybody lined up in the backend, he communicates, his work ethic around the building and his film study.”

The Browns traded for Ronnie Harrison after rookie second-round pick Grant Delpit was lost for the season with a torn Achilles tendon. The plan is to increase Harrison’s playing time, but Woods said he fits better at strong safety, where Joseph is the starter.

“He was all over the field. He was tough to block,” Priefer said. “He did everything we asked him to do.

“He is fast. He is aggressive. He is smart. He is always active with his hands and his feet, and he is strong enough and fast enough to be successful no matter what he does.”

The Browns have scored 12 touchdowns on 15 trips inside the red zone, and Van Pelt called the plan “definitely collaborative.” He credited the run game for making it work.

** Beckham said he’s praying for Patriots quarterback Cam Newton, who tested positive for COVID-19. They trained together in the offseason.