Stronger, faster, healthier Odell Beckham Jr. reminds everyone of his greatness with huge game vs. Cowboys 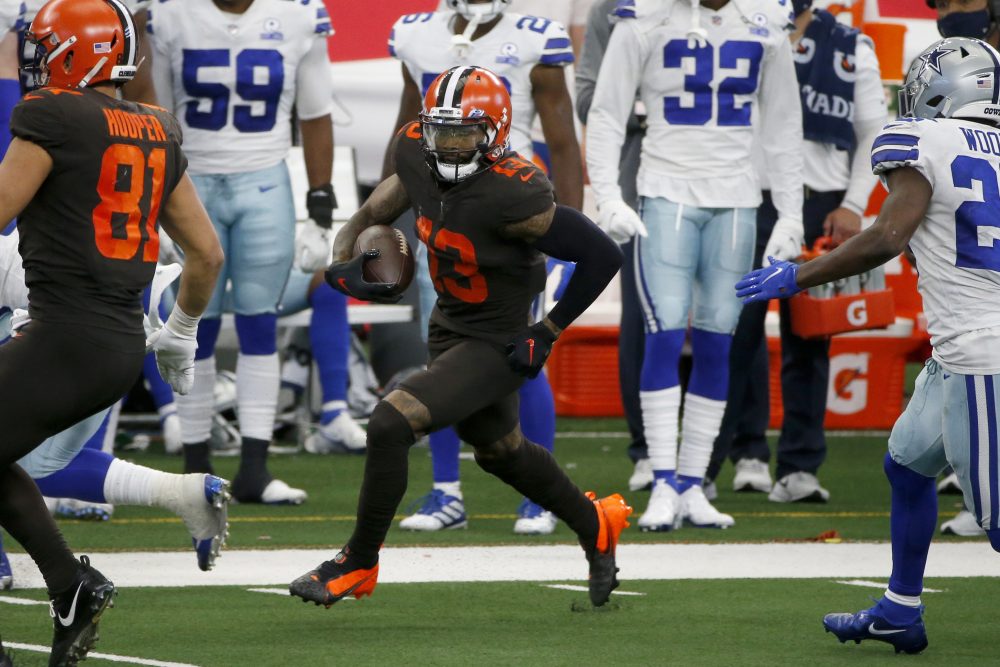 BEREA — Odell Beckham Jr. has always been and will continue to be a popular topic of conversation. He’s too famous and loves the attention too much to vanish from the spotlight.

But over the last couple of years his name had started to disappear from the discussion of the best receivers in the NFL. Michael Thomas, DeAndre Hopkins, Julio Jones, Tyreek Hill, Davante Adams bumped Beckham to the background as he dealt with injuries and the trade to Cleveland.

Beckham sent a not so subtle reminder Sunday to everyone in the NFL that he shouldn’t be forgotten. He caught five passes for 81 yards and two touchdowns and took two end-arounds for 73 yards and a touchdown in the 49-38 win over the Cowboys.

He was asked if that was his “please allow me to reintroduce myself” moment, to borrow a line from Jay-Z.


“No. For me, I have just been waiting,” Beckham said Thursday. “I know what I am capable of doing any given time I am on the field. But I think I did a jump on one of the coaches using that exact line just in case for the ones that are out there that love to hate.

“That is something I never really worry about. I know what I can do. Just trying to find ways to keep this train rolling.”

For best friend and fellow receiver Jarvis Landry, the idea Beckham had slipped down the pecking order of receivers is ridiculous.

“You guys know as well as I do, it should have never been a conversation that he was not an elite player anymore,” he said. “He has always been an elite player.”

Coordinator Alex Van Pelt believes it was important for Beckham to make the world remember.

“He is a very prideful player,” Van Pelt said. “Obviously he wants to be great. Guys like that, when they do not have a chance to show their greatness, kind of get frustrated at times.

“What a better stage than in Dallas to do it in a big game and then really pulled us through to a victory there at the end. That was special for him, I am sure, and does remind everybody of the talent that he does have.”

The Colts visit FirstEnergy Stadium on Sunday at 4:25 p.m., and the Beckham coach Frank Reich studied on film was the same one he saw when he was coaching the Eagles and Beckham was in peak form with the Giants.

“He does look back to normal to me,” Reich said. “He can stop and start on a dime but yet still has the speed to go the distance. He has unique instincts in the pass game and with the ball in his hand. He can hurt you in a lot of different ways.

“He can catch a slant route, make you miss and go the distance. He can beat you on a double move. He can run by you. You can throw a screen pass to him, and he is dynamic with the ball in his hands. He looks physically strong and healthy and obviously is a big-time playmaker.”

The special skill set hadn’t gone anywhere. But injuries prevented Beckham from reaching the enormous heights of his first three Pro Bowl seasons with the Giants, when he caught 288 passes for 4,122 yards and 35 touchdowns.

He was limited to four games in 2017 by a broken ankle and missed four late in 2018 with a quadriceps injury. He played all 16 games last year in his first season with the Browns but was bothered by a core muscle injury the whole time and didn’t reach 1,000 yards until the finale.

He had surgery in January and is finally healthy again. The 50-yard touchdown run Sunday in which he avoided a 14-yard loss then outran the defense to restore a double-digit lead drove home the point.

“Greatness. Another play that you can’t even put into words at a moment like that,” Landry said. “Listen, I have not seen plays like that in the NFL in a long time. Only special guys make those type of plays. He is very special. That is something that we are going to continue to need out of him for the rest of the season.”

If the eye test wasn’t enough proof, he got up to 20.6 mph, according to NFL Next Gen Stats. He reached 21.7 mph on an 89-yard touchdown in Week 2 last year against the Jets but said that doesn’t compare to how he feels now.

“Way different. I had to really strain heavy last year,” said Beckham, who has 16 catches for 236 yards, a 14.8 average and three touchdowns. “Even on that last touchdown, I had not really ran much in the fourth quarter. We were up by so many, I was really just chilling. It felt like because of the way my hamstrings was feeling tight and all this, I did not want to run any faster than I needed to.

“I am definitely stronger, faster this year than I was last year. I am just all-around healthier.”

He’s also in a better place mentally. He bought a house in the area, has a girlfriend and has found a comfort level in his second season with the Browns.

Landry has known Beckham since they were teenagers and doesn’t think he’s seen him this content since their days at LSU.

“Probably college,” Landry said. “Last year, he was dealing with a major that obviously he had to have surgery and coming into a new system, a new team and all of these things.

“This year, I think his body has kind of calmed his mind down from all the things that he had going on that he can go out here and perform at a high level each and every time he takes the field.”

“I think that this is probably one of the best spots I have been in,” he said.

“Just being able to understand the people that you are here giving your day to, it goes a long way,” Beckham said. “There is a great line of communication there. I feel like it is always an open door. We can say things and there are never any hard feelings because we know where each other’s heart is at, and we just want to work and we want to be great. I would definitely say that is a great relationship and just look forward to keeping that going.”

Beckham’s breakout against the Cowboys wasn’t rewarded with a player of the week honor — Bengals running back Joe Mixon got the AFC award after totaling 181 yards and three touchdowns — but his eyes are on much bigger prizes.

“I am here for the long-term goal and the long-term picture,” he said. “I want to win championships. I want to be able to look back on my career and leave the legacy that I wanted to leave.”